And So It Began: A Horse-Show Dad’s First Riding Lesson

Home > Blog > Books and Film > And So It Began: A Horse-Show Dad’s First Riding Lesson 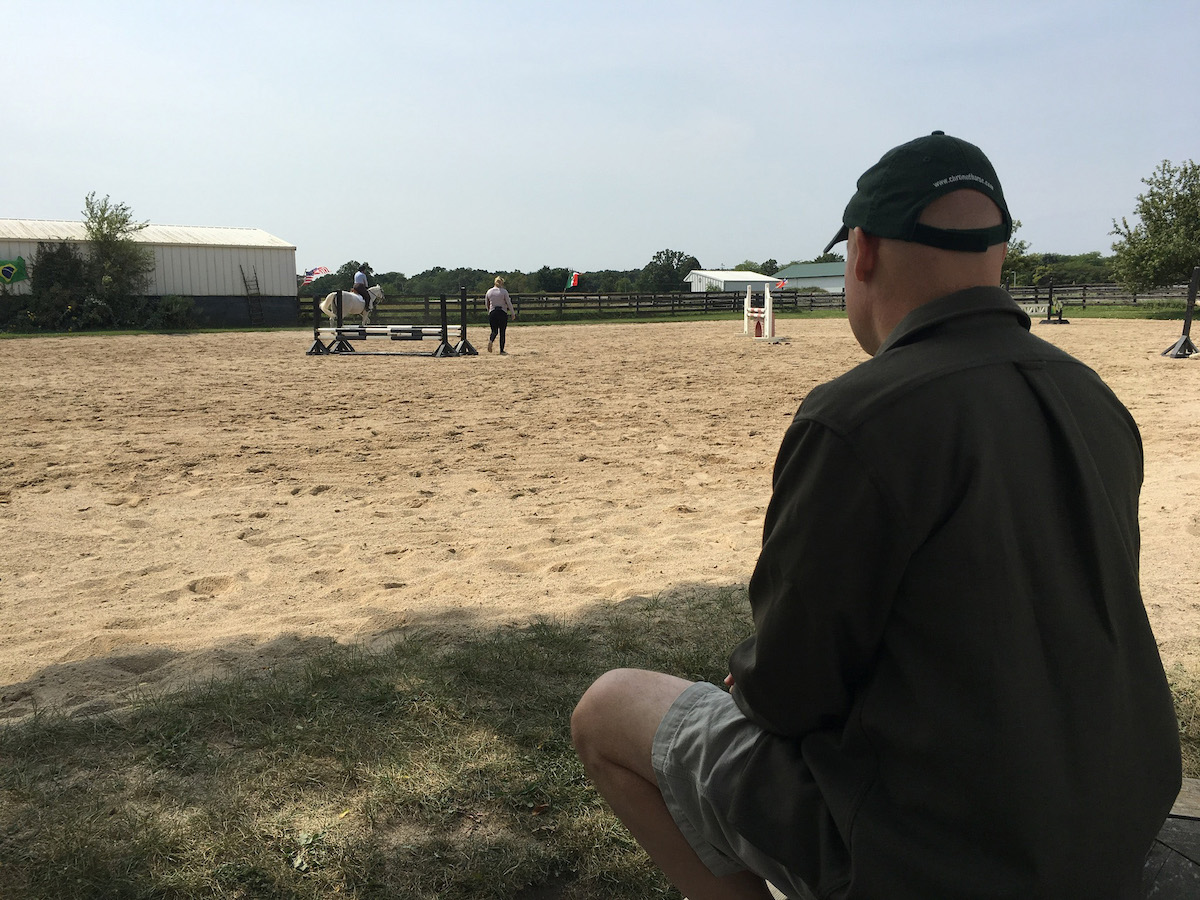 We all remember our early interactions with horses or our first riding lessons, but have we ever wondered what our parents were thinking? In his memoir A Man Walks Into a Barn, (now) veteran horse-show dad Chad Oldfather shares what it was like bringing up three horse-crazy daughters and navigating the wild equestrian world with no prior experience. (In other words, he had no idea what he was getting into…)

We were just inside the door, in one of the corners of an indoor riding ring, our eyes adjusting to the lower light as we tried to get our bearings. Bernadette stood close to three horse-and-rider pairs stationed near the opposite corner. A rider on a white horse went behind them toward the far end of the ring, then turned to come back our way.

If I watched it now, I could provide a fuller description. Was the turn balanced? Did she find a good distance to the first jump? Get the right number of strides in between them? I could answer those questions and more. But my thoughts then were less complex, more like, “That’s interesting—they’re gonna jump some jumps,” and then, “I hope she doesn’t run into the wall.”

Horses turn out to be pretty good at not running into walls. They’ll usually make a sharp turn or a hard stop, both of which can be a problem for a rider who hasn’t planned for them. This rider had made no such plans. The horse stopped, and inertia took over. The rider fell.

It happened right in front of us, and it wasn’t gentle. When the rider hit the ground, her body was a lot closer to horizontal than to vertical. As a newcomer, unaccustomed to how these scenes play out, it registered mostly as a blur. Now, with the benefit of experience, I can confidently guess that it was the sort of fall where a little bit of the riding surface, known as “footing,” ends up in the rider’s mouth and a lot of it ends up in her waistband, with bruising likely to follow.

Experience also tells me that she didn’t actually get right back up and get right back on, even though that is how it registered at the time. Falls would turn out to be a very common part of riding, and at Appy Orse, in particular, the rule is to stay on the ground as long as necessary to confirm that there are no serious injuries. But in the moment Bernadette’s reaction seemed instantaneous, and not what I would have expected: The rider would not be taking a break, or pausing to collect her thoughts, or walking off the minor wounds to her body and pride. She would get back on the horse, and she would do the line of jumps again. This time, if things went according to plan, she would do it right.

I said nothing to Ada or the woman who’d led us into the building and remained standing with us, but what I thought remains one of the more vivid parts of the memory. It began with “Holy” and ended with a series of exclamation points.

The lesson continued with no sense that what had occurred was anything other than business as usual. Bernadette eventually directed us to take a seat in some chairs in a corner of the ring. There were blankets folded nearby if we got chilled—it was early February and well below freezing, and the ring was not heated. Horses cantered past just a few feet in front of us, stirring up cold air and sometimes showering us with footing as they made the turn. Other riders made mistakes, then—like the faller—repeated whatever it was they had been trying to do until they got it right. Bernadette did not soft-pedal her critiques. I spend my days as a law-school professor, so I’m familiar with teaching methods that aren’t exactly soft. But this was truly “old school.”

I wasn’t sure how Ada would react. I suddenly appreciated the reluctance of the other trainers I had called, and the wisdom of Bernadette’s inviting us to watch a lesson before signing up our daughter. The idea of taking lessons might have been one thing and the reality—with its falls and mistakes and critiques—something entirely different.

But Ada was transfixed. “I want to stay,” she told me as the first lesson wrapped up. I promised her we would stay as long as there was something to watch.

We sat through the next lesson, which featured no dramatic falls but otherwise more of the same. After an hour or so it ended, and I broke the news to Ada that it would soon be time for us to leave. But then something unexpected happened. Bernadette asked the youngest rider in the lesson to dismount. Then she invited Ada over to where she stood.

Often, in a situation like this, a child will look to a parent for reassurance that it’s okay. But that’s a gamble, because what if the reassurance doesn’t come? Ada took no chances. It wasn’t clear what was about to happen, but there was a horse involved, and she didn’t cast a single glance my way as she got out of her seat.

I watched as Bernadette asked the young rider who had gotten off the horse for her helmet, which Bernadette then put on Ada’s head. An adjustment or two later, Ada climbed a mounting block, and a moment after that she sat on the horse, for the first time in her life riding one that wasn’t being led or attached to a motorized walker.

I’m at least sometimes a person whose face conveys messages that don’t correspond with what’s going on in my mind. I was surprised, certainly, because this hadn’t been part of the plan. But I was likewise thrilled because I knew how exciting this was for Ada. My expression, though, must have read as nervous. The woman who’d acted as our guide offered reassurance.

“This horse is barely awake,” she told me. “She’ll be fine.”

I wasn’t worried, and Ada was more than fine. She rode around the ring proud as could be.

She delivered her verdict the moment the car door closed for the trip home: “I want to ride here.”

And so it began.

This excerpt from A Man Walks Into a Barn by Chad Oldfather is reprinted with permission from Trafalgar Square Books (www.HorseandRiderBooks.com).