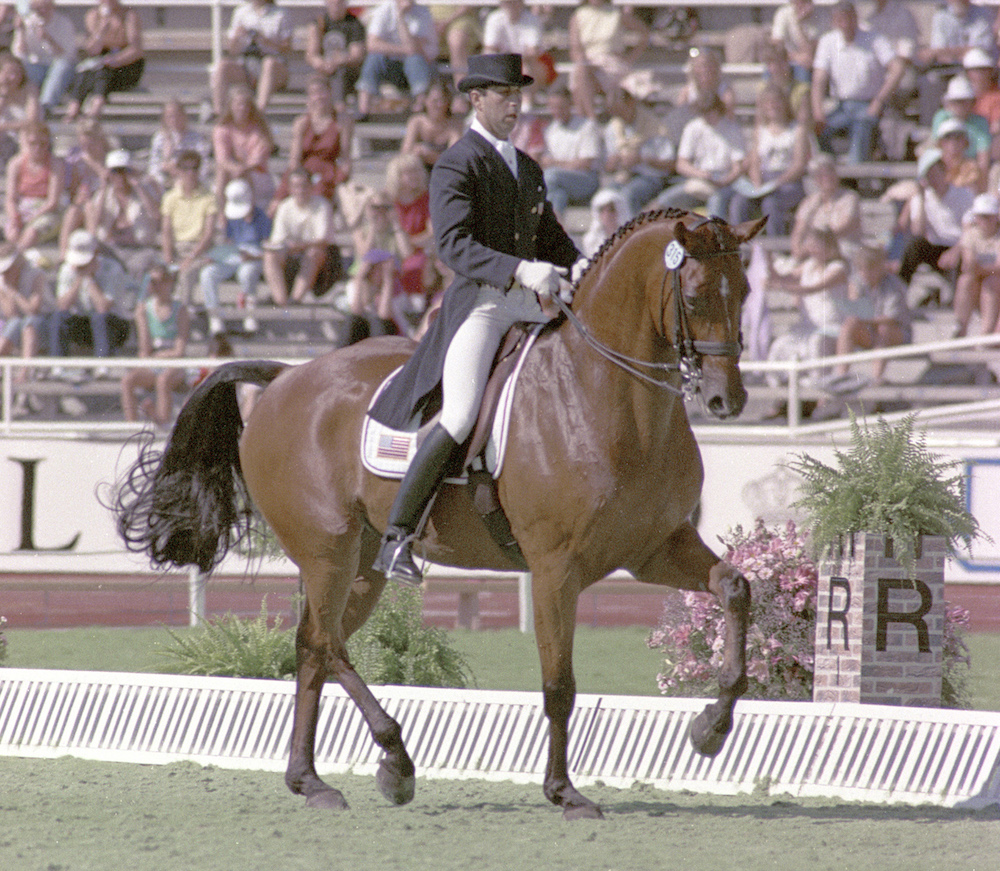 When you ride numerous horses over the course of your life, you’re bound to experience some with, shall we say, “challenging” behaviors. It is these horses, as much as the schoolmasters and saints, that keep us coming back for more. Part of the appeal of a lifetime in horsemanship is continuing to learn and grow and find ways to connect with even the most difficult cases. Six-time Olympian Robert Dover has had his share of challenging rides over his years at the top of the competitive dressage world. In this excerpt from his new book THE GATES TO BRILLIANCE, he shares the story of one very talented horse who earned a memorable nickname: “Crazy Walter.”

After my early successes, I built up a large clientele of great students and friends, and at one point, had seventy horses in my barn.

One of those clients was the McPhail family: Mary Anne, Walter, and their daughter Melinda. I loved all three of them (and still do!) and taught mother and daughter on their horses, including a nine-year-old gelding named Waltzertakt, nicknamed “Walter” and sometimes not-so-lovingly referred to by his alter ego, “Crazy Walter.” He was a beautiful horse and actually quite talented, which I found out the first time I tried him. He also had a very short fuse that, once lit, could go off and bring out an animal that not only could do things to hurt you, but lacking any sense of self-preservation, could kill himself in the process!

Walter could be really very sweet and began learning the Grand Prix quite quickly. He even started to show signs of becoming an international winner—of sorts. The problem was that at any moment, almost anything could set him off, and the kind of rampage that might ensue was anyone’s guess. (He would go on to win not one but two Grand Prix National Championships at Gladstone and was nominated to our World Championships Team in Stockholm in 1990. On the way to that, however, were shows that I will never forget, even if I tried—and believe me, I have tried!)

Walter was one of the seven horses I took to Germany in the winter of 1986. The McPhails had placed great deal of trust in me to allow me to take their horse, and of course I did my best to keep expenses for them, and for all my clients, as low as possible. One way to do that was to fly the horses in single-stall containers, three abreast, to Frankfurt, Germany, on Lufthansa airline. Not having flown with horses before, I had no idea as to whether this arrangement was more or less safe than the usual double stall containers, but I knew it was a hell of a lot cheaper. I put Walter between two other horses, one traveling with me and one who was with someone else but made up the third spot in our container. David and I were on the flight with my dogs, Half-Halt and Pirouette, and all was quiet.

After landing we had to wait what seemed like an eternity before airline staff began to unload the containers on their pallets, using forklifts to lower them to the ground. I remained in the sectioned-off front of the container to comfort my two horses as we were moved, to little effect—something about the way the container began to shake during the process set “Crazy Walter” off and calm turned quickly into a nightmare. He pulled back, almost to the point of lying down, but feeling the pull from the two lines connecting his halter to the bars at the front of the stall, he then leapt forward, practically jumping into the front of the container with me. Again and again he went backward and then flung himself forward, hitting his head on the top of the container and striking me with his hooves as he got his legs over the front of the divider where I cowered.

It took several minutes before we were finally on the ground. Both the horse and I were bleeding, and there was no doubt that Walter needed immediate medical care. A horse ambulance was summoned, and off he went with a handler to the closest equine hospital. Luckily, I only had a few bad scrapes, but I was badly shaken, nevertheless.

Walter recovered and went back to work, but not without drama. There was a brown sliding door at the far end of the indoor arena, through which the tractor could come to rake the footing. It rained practically every day in our area of Germany, and for some reason, the inside of that sliding door would get a dark splotch in the middle from moisture condensation. Well, that was enough for “Crazy Walter.” He would stop halfway down the arena and refuse to go anywhere near it. It became so bad that one day when the vet was there to inoculate horses, I dismounted while schooling the gelding and asked the vet to take a look at his eyes. I wondered if perhaps he had cataracts or some other partial blindness and felt terrible that it was a possibility, given the trauma that he had endured. After a careful look, however, and with a sort of a chuckle that made me know he was partly joking, the vet handed me back the reins and declared Walter had nothing wrong with his eyes that a good spanking could not cure!

In the spring of 1988, I had a nice show scheduled in Paris, in the famous Bois de Boulogne park. The stables had been set on the other side of a very busy downtown street. The local gendarmes were there all day and evening to assure riders, grooms, and horses could cross without issues from ongoing traffic.

Or so I thought.

That afternoon, I rode Walter up to the intersection where the police were stationed and ready to stop traffic. The horse took one look at the white painted stripes of the crosswalk and reared up, then bolted back toward the barn. I managed to stop him after several strides and turned back around toward the crosswalk as Petra came running to help. We both thought she could take the reins and lead us across the street to the park, but Crazy Walter would have none of it, rearing up and whirling around again, literally picking Petra up off the ground as the three of us went sailing back toward the stables again. Collecting myself, the horse, and my nerves, once more I made my way to the crosswalk and the policeman who now was looking at us with justified trepidation. But this time, just as Walter was getting to that point of making a bid for home, I turned him around and began backing him up. Not seeing where I was directing him, he proceeded to back right up, across the road, and up onto the sidewalk on the opposite side. There I turned him around to face the nice green park, toward which he gladly resumed marching.

We actually had quite a good show!

This excerpt from The Gates to Brilliance by Robert Dover is reprinted with permission from Trafalgar Square Books (www.horseandriderbooks.com).