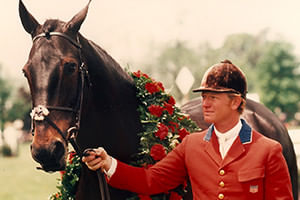 While I finished three-time Olympian Jim Wofford’s memoir, the three-day eventing portion of the Tokyo Olympics played in the background.

Competitors completed dressage tests, leaped over Samurai sword-shaped logs in the cross country, and bounded over cherry blossom-themed jumps in the show jumping portion. Despite improved safety equipment and an empty stadium due to COVID-19, there was this strange illusion that three-day eventing is still much as it was when it began in 1912.

In Still Horse Crazy After All These Years, Jim Wofford reminds us that the sport is dynamic, colorful, and ever-evolving.

Wofford’s father,  Col. John W. Wofford, rode for the show jumping team in the 1932 Olympics and coached several others. At 1948 Games, Jim got close to the Olympic flame only to be chased away by an English policeman—he was three.

At six, he watched KGB officers herd the USSR riders into locked stalls at the Helsinki Games in 1952.

At the time, the U.S. cavalry still had horses and was based in Fort Riley, Kansas. The Wofford family lived just outside the Fort. As Wofford grew into adulthood, equestrian sport transitioned from cavalrymen to the civilian athletes we see today.

Col. Wofford died when Jim was ten, and he notes that he wished he had been a fly on the stall during his fathers’ years as an equestrian. In Still Horse Crazy After All These Years, Jim allows us to be those flies in his own life. Readers get to vicariously experience what it was like to compete at eventing’s highest level. Then watch it grow from a “rustic” sport, as he calls it, with less than a thousand members in the U.S., to the worldwide sensation it is today.

We even get to ride with him in two Olympics, face turmoil at a third and go on to coach Olympians whose name recognition still rings through equestrian spaces today.

One of the challenges of writing sports memoirs is balancing writing for super fans and writing for a general audience. The balance is especially difficult in the horse world, where complex terminology and name dropping are a constant. Jim successfully makes the book clear and satisfying to both types of readers, creating a fast-paced memoir that is wonderfully readable. He is a fantastic storyteller with an eye for detail, yet his self-awareness often sets him apart on the page.

His understanding of himself and his audiences shines throughout the book, but the chapter “Learning my Political ABCs” is a good example. In it, Jim recounts his experiences as a committee member and president within equestrian governance organizations such as FEI and the USEF. He also explains that for many, this stuff is boring—his family referred to all the organizations as “The Alphabets” because all the acronyms blend together. This wink toward the audience is one of many. It lets those who wanted all the details know they were in the right place and gave those who found their eyes glazing over permission to skip to the next chapter.

Wofford often refers to himself as an avid reader, and he understands that a good piece of horse writing usually requires good horses. Of course, the medal-winning Kilkenny plays a significant part, but many lesser-known horses become characters too. The cantankerous but gutsy Appaloosa, Atos, is one such memorable addition.

What’s more, he often writes about the horses in a way that makes them seem more like the horses we love at home versus the ones believed to be superheroes. Some horses are powderkegs, some are sweet, some get sick, and some have mishaps, reminding me of the sage advice a trainer once gave me, “No matter the breed, the discipline, or the level, a horse is still a horse.”

Still Horse Crazy After All These Years isn’t just the tale of an athlete, but a story for eventers, history geeks, and yes, the horse crazy. Even now that the Olympics have ended, this one will be worth a read for years to come.