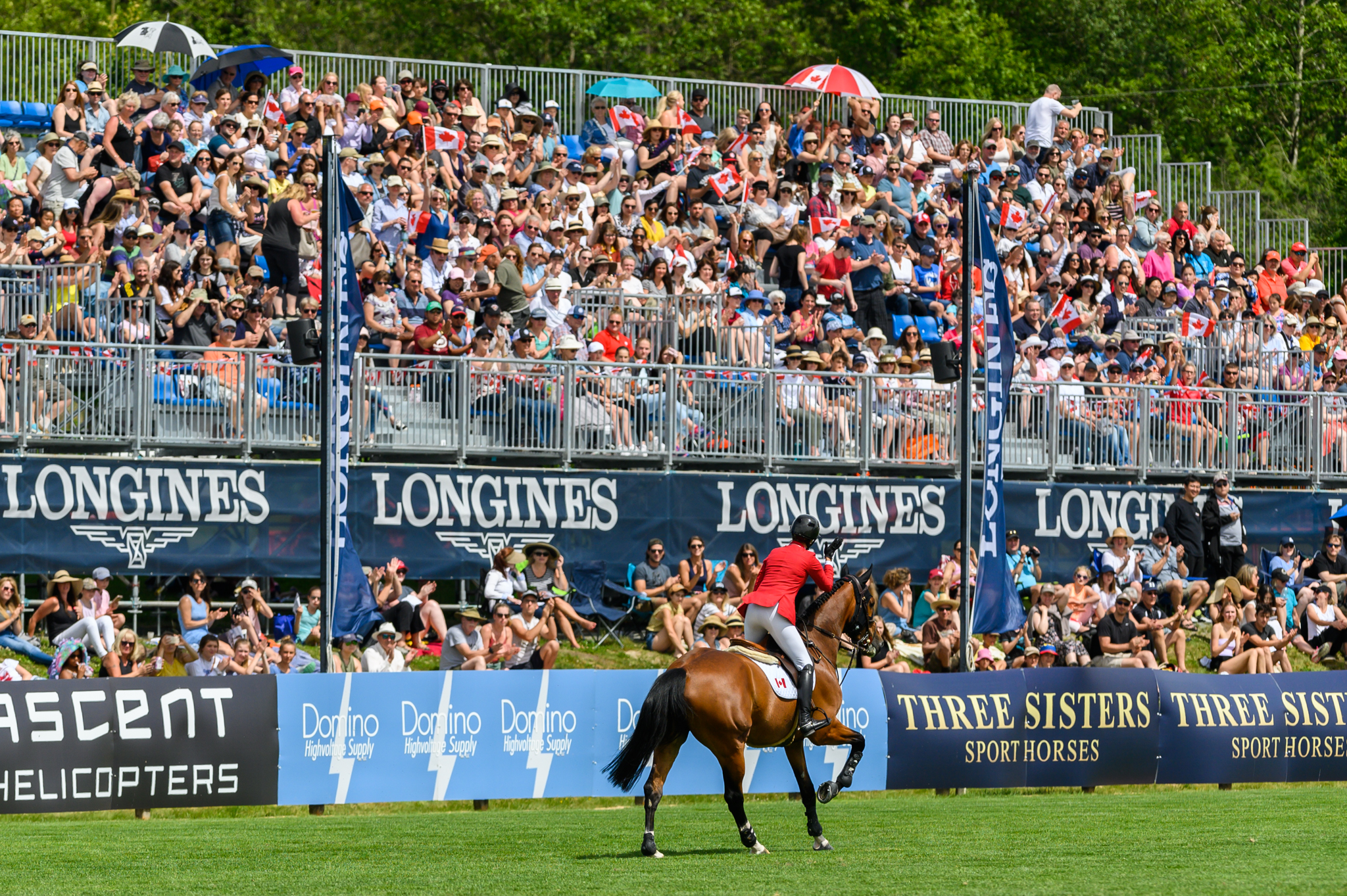 But not just yet…

Because last week? Last week was magical in all the ways a horse show should be—spectacular storylines that rode a rollercoaster of emotional highs and lows, a thrilling division final, and a stunning arena made electric by packed stands and a cheering crowd in a sport that typically fills more VIP tables than grandstands.

These are our top 10 moments from the week that was at tbird.

Mexico’s “King of Speed” Arturo Parada Vallejo has been dreaming of competing on the Canadian circuit for years but didn’t have the horsepower to do it before now. Months of planning and 40 days of quarantine paid off for the 30-year-old rider on the first day of international competition when he raced straight into the winner’s circle—twice.

Parada Vallejo won the first international class of the week with the CSI2* tbird Welcome aboard Cassidy Z and went on to capture the $8,500 CSIO5* Happy Welcome aboard Vitot Kerve that same afternoon. He nearly pulled off the hat trick when he took over the lead in the $36,500 CSIO5* Artisan Farms Nations Welcome with Tarzan d’Ivraie but was ultimately forced to settle for second. He starts our top 10 the way he started his week. With a bang!

Tiffany Foster (CAN) grew up at Thunderbird Show Park winning just about every hunter and equitation class on offer as a junior and working student. Her decorated career has included over 30 Nations Cup appearances, a Pan American team silver medal and two Olympic Games since, but never a jumper class win at tbird. Until last week.

Foster remedied that record on opening day with a win in Thursday’s CSIO5* Artisan Farms Nations Welcome on Brighton, a horse owned by the class sponsor. That full circle moment when her tbird past and Artisan Farms present collided is #9 on our list but it just as easily could have been Foster’s comeback performance on Sunday. The Canadian Olympian took a tumble in Friday’s Longines Grand Prix on Victor and came back Sunday to deliver the clutch performance on Figor that cemented Canada’s win the Sunday’s Nations Cup team.

8. Justin Prather Aced the U25

EZ Ace and Justin Prather slide into the #8 slot for winning the MarBill Hill U25 League and not cursing on camera. “EZ” has been in the Bradon Equestrian family since he was three years old, but is a relatively new mount for the 24-year-old. Prather has high hopes for the nine-year-old gelding by Richard Spooner’s 2008 World Cup Finals mount, Ace, and out of another former Spooner mount, Ezrah and the U25 was the first to be crossed off his list.

Ireland’s Daniel Coyle is no “stranger” to success at tbird. In 2018, he won the Longines Grand Prix with Cita and was a member of the winning Irish Nations Cup team. This year he kept his double victory streak alive with a win in Friday’s $36,500 CSI2* Friends of tbird with upcoming mount CHS Krooze, and in Saturday’s $36,500 CSIO5* tbird Cup with veteran mount Cita, who was making her first international appearance of the year.

“She’s special, as most mares are,” said Coyle of CHS Krooze, “but if they’re on your side, there’s nothing better, I believe! She gives her heart every single time.”

There’s more losing in show jumping than victory gallops. Francisco Pasquel (MEX) takes the #5 spot for sharing the lows along with the highs of his Nations Cups career. And for still being mortified about that one unfortunate performance in his junior career 20 odd years later…

The Nations Cup teams gave us all the feels last week. (Literally. We asked them to grope around blindly and touch gross things.) All five squeeze into the #4 spot for being great sports and tolerating this bit of nonsense.

3. Babel is the gift that keeps on giving

Patricio Pasquel‘s (MEX) homebred gelding Babel has won an astounding 130 first place finishes in his career. On Friday, he added the $235,000 CSIO5* LONGINES Grand Prix to that already impressive list to claim the #3 spot on the tbird top 10.

“He was born in the house!” Pasquel exclaimed. “He’s been champion all over the ranks, and this is his second five-star grand prix win. He’s won already on several Nations Cup [teams]. I couldn’t be happier with him.”

2. Eduardo Menezes is all the good things

Feel good story of the week goes to Uryadi’s Village sponsor Eduardo Menezes (BRA) who won the 2* Grand Prix AND helped raise a record setting $106k for the non-profit close the father-of-two’s heart.

“My son Matteo, my little one, has Down Syndrome, and I mean what [Uryadi’s Village founder Jennifer Fill-Crooks] does is just unbelievable. It’s breathtaking,” said Menezes, who also has a five year old son, Luca, who is on the autism spectrum. “I can’t talk to her without getting emotional…We were involved as soon as we knew about it.”

With a single rail between them, they were #1 in the Nations Cup and are #1 on our list! Team Canada takes the top spot for bringing home a decisive victory in the Longines FEI Jumping Nations Cup™ of Canada and bringing down the house before a sold out crowd at tbird.

Alas, the win was not enough to qualify Canada for the Nations Cup Final in Barcelona. The American’s secured their spot with a third place finish in this final leg of the North and Central America and Caribbean Division; Mexico claimed the other. But Sunday’s win will go down in history as Canada’s first Nations Cup victory on home soil at tbird.