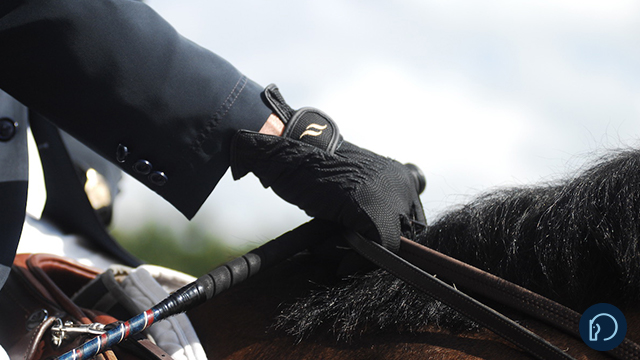 “When you have elastic arms and an independent seat—you support your upper body from your security in the tack and balance in the stirrups, not the neck—you can do anything you want,” says USET veteran Bernie Traurig.

In this lesson, the EquestrianCoach.com founder teaches how to be “in balance with your horse on the approach to the jump, over the fence, and on the landing, as well as connection with the mouth on the flat and over fences.”

Step 1: Connect at the walk

“The goal is to have connection or contact, following the horse’s neck and head in the air over the fence. We start by having a following arm in the walk,” said Traurig.

“In general, we try to keep a straight line with our arms from the horse’s mouth to the elbow—with a hand angle of about 30 degrees or the slope of the shoulder. I like to ride with the rein between my pinky and ring finger and with a little bit of an open hand. In this way, I develop feeling with my ring finger and my arm.”

To develop elastic arms that follow from the shoulder joint, establish contact at the walk and focus on following the motion of the horse’s neck, which is his balancing mechanism. “You want a rhythmical forward walk. Follow with your arms as he swings his neck,” explained Traurig.

Once you’re comfortable with a following contact at the walk, practice it at the canter. “Follow the motion of the neck with your hand and arm, paying attention to the width of your hands,” he advised.

“If the hands are too close together they will interfere with the automatic release in the air. The wrists should be separated a bit wider than normal so the neck does not interfere and to give you more control over the horse.”

“Loss of connection in the air has become the norm, especially in the hunter rinG.”

“Although we’ve always used the mane and neck as a teaching tool, since the early 70s riders in this country seem to rely on the neck for balance way beyond the intermediate level. Loss of connection in the air has become the norm, especially in the hunter ring where it seems to be quite acceptable and even fashionable. Advanced riders should strive to master all releases and use them at their discretion.”

To practice the automatic release, set a small vertical and canter it from both directions. “Follow the motion in the air by letting the horse take your hand, maintaining the feel on the landing. Don’t interfere with the horse’s bascule at all. It is a soft, subtle feel,” he emphasized.

Step 4: Work from an independent seat

“Having an independent seat from arms is especially important in classes that require a turn in the air or asking for a lead in the air. If you’re going to rely on the neck for balance at that stage, it’s near impossible to get the turn without stiffing the horse in the neck. You’re probably not that soft with the arms if you’re up on the neck or you’re just plain late,” said Traurig.

Cantering the same vertical, ask for a turn in the air. “On a more educated horse, use a very subtle direct feel with the ring finger, taking extreme care to follow through with your arms softly during the flight phase. On a less educated horse, open the rein,” he advised. In either case, stay away from a hard, direct rein.

Step 5: Stay with the motion

“Some horses require a deeper seat with more leg. Most horses on most courses today are ridden in a forward half seat or a light seat closer to the saddle. We have variations in our hip angle—closed or open, rising up or sinking in—and we use different seats for different circumstances,” said Traurig.

For more on this and other riding exercises with Bernie Traurig, go to equestriancoach.com.