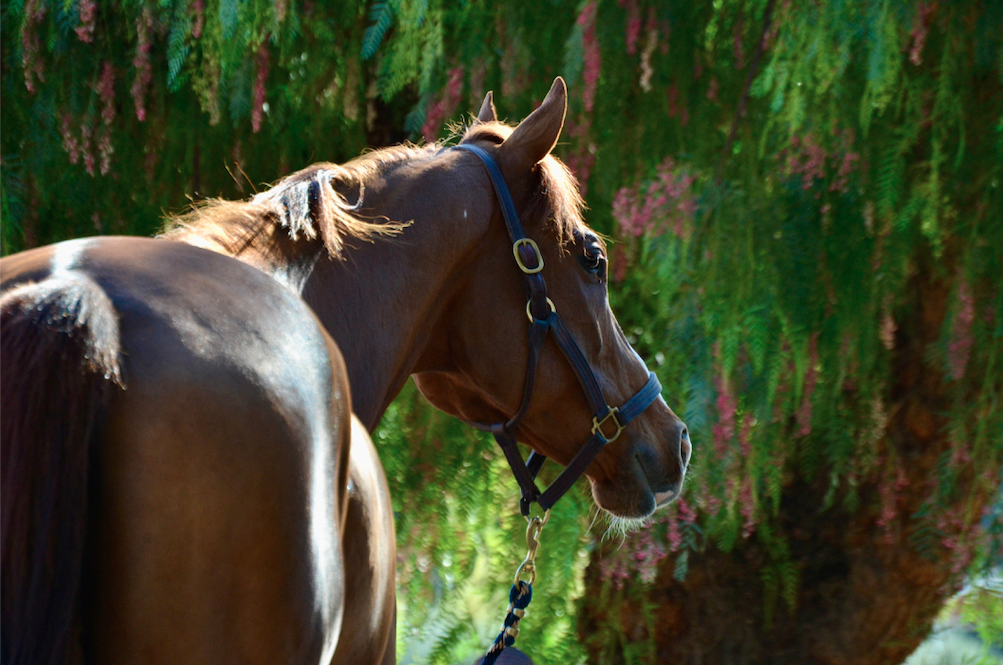 If you own and ride horses, you spend a good amount of time sleuthing—trying to figure out why they might be behaving a certain way at a certain time or in relation to a certain something. We’re encouraged to look for the underlying causes for abnormal or “bad” behavior rather than just blaming the horse for bucking, biting, kicking, spooking, bolting, you name it. There is, after all, usually a reason he’s doing what he’s doing. He just can’t explain it to us.

In his newest book For the Love of the Horse, renowned trainer and author Mark Rashid talks about his own growing understanding of horse behavior, and the reasons for that evolution. Here’s just one such story he shares in those pages.

Then, as I began to study the different aspects and potential causes and effects of behavior, horse behavior no longer seemed just horse behavior anymore. When I was learning about chiropractic, all unwanted behavior seemed to stem from chiropractic issues. When I was learning about saddle fit, I started to see unwanted behavior as potential saddle-fit issues. It was the same when it came to teeth, bodywork, nutrition, and all the rest.

Then, over years of studying and observation, things began to shift again. I started to see that while there’s no question a lot of unwanted behavior can be traced back to some underlying physical or emotional issue, in the end, the behavior is just behavior. It’s the way a horse acts in relation to how the horse feels.

Today when I work with a horse and rider, and almost always before we even get started, I look to see if there are any glaring physical issues or asymmetries in the horse’s movement. I look for any possible signs of saddle fit, dental, or feet issues. Depending on the horse and the behavior exhibited, I might ask what the horse is being fed, what the living situation is, or even how the horse is bred.

I’m never looking for anything specific with any of this, nor am I making any judgments about what I see. Rather, I try to just take the information in and put it in the back of my mind. If the horse shows some kind of behavior, it is usually associated with one or more of the possible causes I’ve already noticed, and then I discuss it with the rider.

Much of the time, we can figure out the possible cause of an unwanted behavior just by the rider describing the behavior and then watching the horse go. An example of this happened several years ago when one of our clinic hosts, an accomplished trainer and rider, asked me to take a look at a horse she had been riding for a client.

She’d been experiencing a couple issues with the little mare she couldn’t quite put her finger on. The first was that they would often be going around nicely, then suddenly the mare would put her head almost to the ground for several strides before throwing her head almost straight up and shaking it. After the head shake, she would then put her head in a normal position. This behavior usually got worse the faster the horse went. The other issue she was having was that the mare was stumbling, which also got worse the faster she went. The stumbling had gotten so bad that they had actually fallen once while at the canter.

Stumbling can show up when a horse’s feet have grown too long or from physical issues or a tightness somewhere in the body, such as the shoulders, withers, and neck. We’ve also seen it in horses with substantial dental issues. But this horse didn’t appear to have any of these issues.

It wasn’t long after the pair started cantering an eighty-foot circle in the arena that both issues the clinic host described became apparent. Within a few strides after their transition to the canter, the mare dropped her head so low her nose nearly touched the ground.

She then tipped her head from side to side, lifted it so her nose almost pointed toward the sky, shook it again, then lowered it to a normal position. About a half lap later she repeated almost the exact same behavior, something she would do numerous times over the next several minutes and regardless of the direction in which she was ridden. She also stumbled a couple times as well, although she always caught herself.

Nothing about the behaviors the mare was offering looked normal to me. Horses that lower their head while ridden might do so as a way to stretch, but they seldom tip their head from side to side while their nose is almost on the ground, and almost never follow it with sticking their nose straight up in the air and shaking their head.

As far as stumbling, that is certainly not uncommon. However, what was uncommon was that when I asked the host if she’d ever seen the horse stumble while cantering around out in the pasture, her answer was yes. Not only that, but she said the mare did all the behaviors without a rider on her back, including everything she did with her head.

This was an important bit of information. Generally speaking, if horses exhibit some sort of odd or unwanted behavior under saddle, but not when they are out on their own, then the behavior is likely caused by something associated with their rider, such as training or ill-fitting tack, or possibly even something physical that only shows up when they have weight on their back. If, on the other hand, the same behavior shows up whether the horse is being ridden or not, that could very well be a sign that whatever the issue is, it’s there all the time and might not have anything to do with the rider.

At face value, the mare’s behaviors weren’t necessarily out of the ordinary as far as things that horses do from time to time. But they didn’t seem quite right, either. The problem, at least initially, was that I couldn’t put my finger on what was going on.

Over the years I had seen variations of everything the mare was offering, but never all of them together, and never as dramatic as what she was presenting. As I watched her head drop to the ground for about the tenth time, followed by the raised head shaking, I started getting the impression the mare might be having trouble with her vision. I wasn’t convinced this was the case. Over the years I’d seen quite a few horses with odd behavior that had me wondering if they were having trouble with their vision.

Out of those, only a handful ended up being diagnosed as such. But still, this looked pretty strange. I filmed the mare’s behavior and sent it off to a friend who happens to be a leading equine ophthalmologist to get his opinion. He suggested taking close-up photos of each of her eyes after dark, using a flash. If anything was getting in the way of her vision, it would probably show up in the photos.

Sure enough, the photos showed what looked like a small, jagged-edged island, partially covering the lens in her right eye. I sent the photos to my friend, who confirmed that what we were seeing was a floating cyst. Because the cyst was floating, she was able to move it around by raising, lowering, and shaking her head. As it turned out, her stumbling was a result of her vision being impaired and everything else was nothing more than her trying to move the cyst so she could see better.

Luckily, this was able to be resolved through a non-invasive procedure by a local equine ophthalmologist and the mare was able to go back to her normal activity within a relatively short time after having it done.

This excerpt from For the Love of a Horse by Mark Rashid is reprinted with permission from
Trafalgar Square Books (www.horseandriderbooks.com).