James Kann Cruz, “What a Horse!” 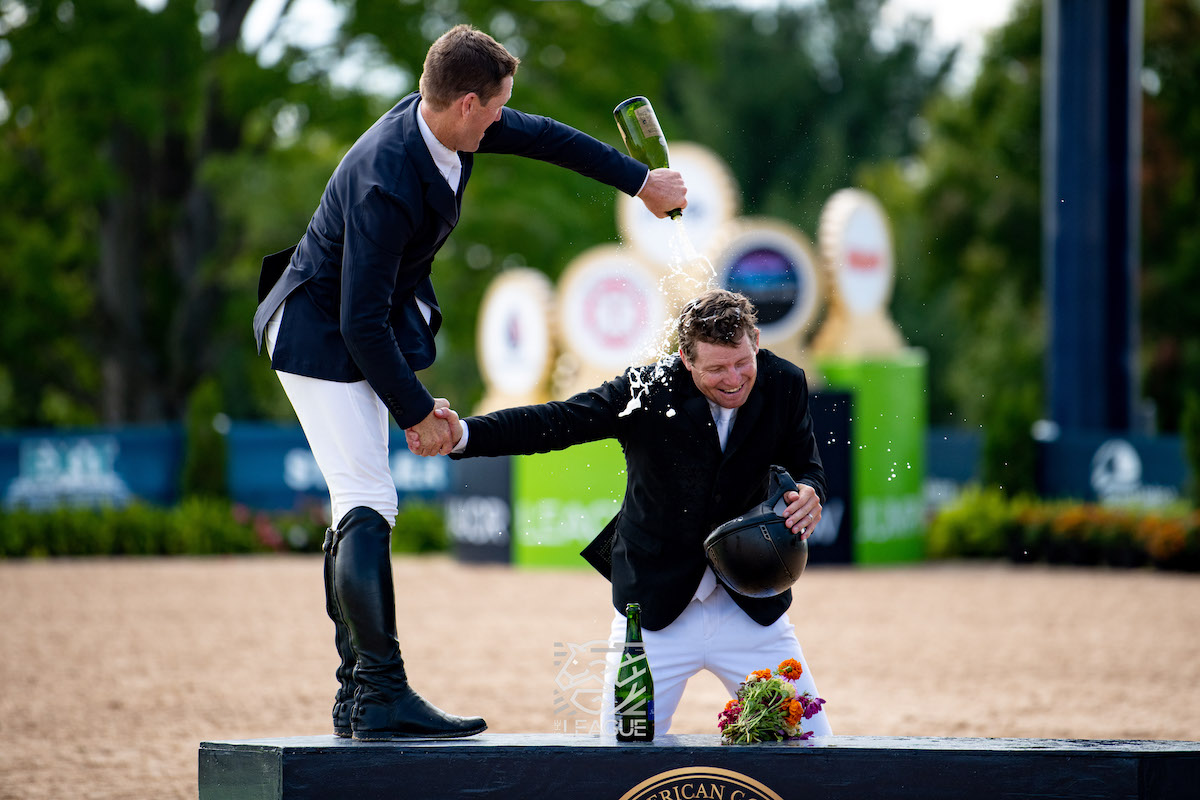 When Spy Coast Spies’ Shane Sweetnam (IRL) and James Kann Cruz entered the Turtle Creek Casino and Hotel arena on Sunday to contest the 52nd running of the American Gold Cup, they were already favorited for a top 10 finish.

Just two days prior, the pair won the CSI5* Callidae 1.50m Jump Off class at the Traverse City, MI venue.

They gave every appearance of gearing up for a repeat performance on Sunday, too. In the seconds before the start bell rang and they picked up a gallop to the first fence, Sweetnam and “Gizmo” executed a collected counter-canter circle around the open water.

Was it strategic preparation for a turn? Fine tuning the controls? Correcting a right drift?

“But we work together on it.”

Intentional or not, their efforts yielded impressive results. Fourth in the order, Sweetnam and the nine-year-old grey gelding posted the first clear round on a day that would only see three combinations successfully navigate Alan Wade’s 1.60m course—a “proper 5* Grand Prix” by McLain Ward’s estimation.

One round later, Ward followed suit with Callas to guarantee a jump off. But it would be 21 more rounds before Lacey Gilbertson, Sweetnam’s student and Spy Coast Spies teammate, would make a trifecta for the jump off aboard Karlin van’t Vennehof.

In the end though, it was Sweetnam and the scopey grey’s class to lose.

First to return for the short course, the pair posted the only double clear and the speediest time on the day (40.42 seconds) to add the Irish riders name to the storied the American Gold Cup trophy, a class 52 years in the making. It was James Kann Cruz’s first ever 5* Grand Prix win and Sweetnam’s second.

“What a horse. That seems to be the common phrase whenever we’re talking about [James Kann Cruz],” enthused Sweetnam. “It’s one of those horses you search for a long time in your career and then when you find it, you don’t believe it’s really real. Every day he comes out and performs even better. So I have to say, what a horse!”

Sweetnam has been paired with the Irish Sporthorse for a year nearly to the day. A week before the American Gold Cup last year, he flew to Ireland to try the horse on the recommendation of renowned Irish horseman Francis Connors and was quickly made a believer.

“He’s very sharp and has a lot of blood. Very smart horse. So he was a bit of a handful just trying to get the feel of him. But the jump felt amazing. And he’s like dynamite. Any little light touch at all, he reacts to it. So it’s a great feeling,” shared Sweetnam after Friday’s win.

Already the Irish pair has collected CSIO5* Nations Cup victories in Langley, BC and Dublin, Ireland this year. With Sweetnam in the saddle, James Kann Cruz boasts a 70% top ten finish rate in 14, 1.60m appearances, according to JUMPR App. But by the Irish rider’s estimation, they’re still “learning each other.”

On Friday, the Cork-native tested a bridle change on the horse he describes as “sensitive in the mouth but a little strong at the same time.”

“I tried to be clever earlier in the week, and I said, ‘Now because we got through the summer maybe I’ll try a few different things’ and even though he jumped clear in the first round on Friday, it didn’t feel great. So we went back to our [old bridle on Sunday] and then he was happy,” he explained.

“He was mad before and after he was happy. Like I said, we’re a partnership and he gets what he wants.”

What a horse, indeed.

Sweetnam also rode away with the $30,000 CaptiveOne Rider Bonus at Traverse City Horse Shows, which he volunteered to split with his Spy Coast Spies teammate and bonus runner up Margie Engle.

What a teammate, too.