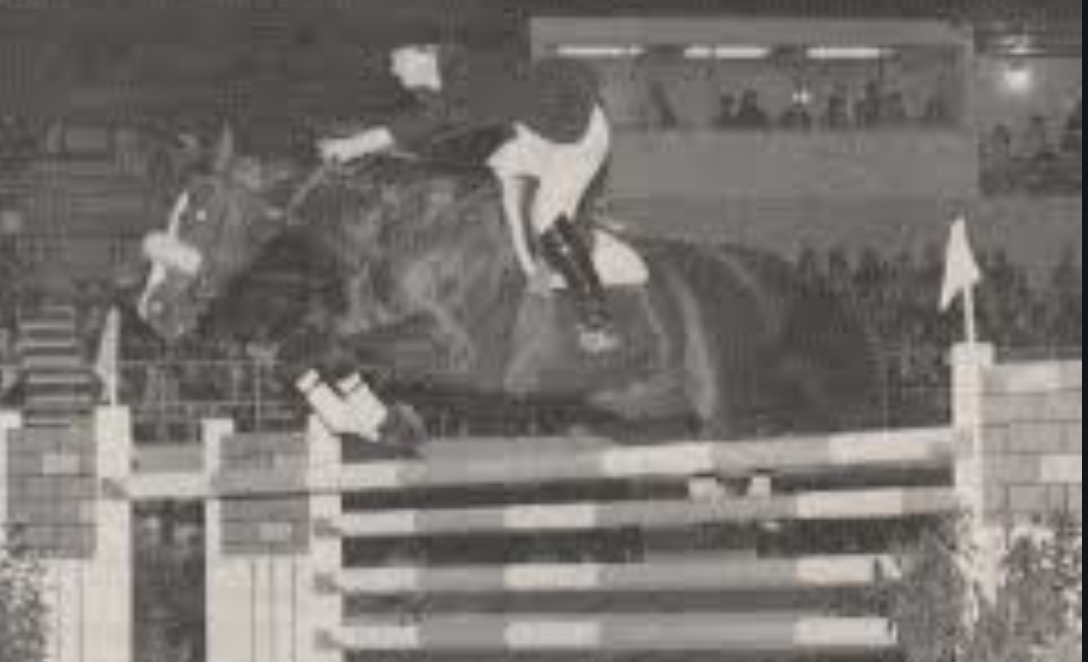 But there was a time when team USA’s most decorated rider was short on both money and good horses. Though never on ambition, it would seem.

Twenty-five year old Beezie (then “Patton”) was working for John Madden in Nelson, New York, when the pair took a gamble on their first ever European tour. Using Madden’s life savings, they booked one-way flights for themselves and two horses overseas.

Naturally, Madden had a foolproof plan going into the endeavor.

“We didn’t have enough money to fly home unless we won enough prize money,” explained Beezie.

It’s important to note here that in the 80s, flying horses across the Atlantic was not an everyday occurrence. Just a decade earlier John flew horses to the World Cup in Gothenburg, Sweden only to discover they couldn’t get them off the truck because the loading ramps used in Europe didn’t line up with the American shipping containers.

“Me and a bunch of other guys went in an Army truck and we got some lumber at the lumber yard and built a ramp to get the horses off,” smiled John. “That’s how different it was.”

By the time the John and Beezie were Europe bound in ’89, ramps weren’t a concern. But their horsepower probably should’ve been.

“We had one horse that was owned by [Johan] Heins, called Elliot Ness. He was a really good horse, a good jumper but he was really bad at water, very spooky. Then we had another horse [Northern Magic] that was given to us for free from the Southern’s because he was not so sound,” said John.

“So we had a free horse and a horse that wouldn’t jump the water and we had no money.”

Given those promising prospects, the pair hedged their European bet and targeted easier shows.

“We started at Rome,” deadpanned Beezie.

Rome, in case you haven’t picked up on Madden’s reserved approach to risk taking yet, is a CSIO event. It’s one of the biggest shows in Europe.

“We were so stupid, we just didn’t even know!” laughed John. “We said, ‘We’ll start there and just like we do at home, we’ll win money and then we’ll come home.’”

And that’s precisely what they did.

Beezie being Beezie—and seemingly immune to pressure even then—posted the only double clear performance of the day in the Samsung Nations Cup at Rome.

“I still have the newspaper of me jumping over the headlines,” she said.

From Italy, they proceeded to stop at all the biggest shows in Europe—Wiesbaden, Copenhagen, Hickstead, Eindhoven—scraping by on winnings and pluck.

“Beezie, she sort of slept wherever we could find,” recalled John. “Some of the shows gave her a hotel room. Other shows, I think she stayed with friends or in people’s trucks.”

John, meanwhile, spent most of his nights in the stable.

“We worked on a shoestring [budget] for a few years there, so we were used to it,” she smiled.

What they weren’t use to was being flush with Deutsche Marks, which is how they left Germany after a particularly successful week in Wiesbaden.

“A lot of times [the shows] paid you in cash,” explained Beezie. “We won a lot in Wiesbaden, so we kind of had pockets full of cash leaving there.”

Europe granted the pair a wealth of experience, as well.

Prior to their overseas adventure, Beezie had contested the Rhode Island Derby in New York, a “serious, serious derby” by John’s estimation. It did little to prepare her for the one she’d face in Eindhoven, Holland.

“We go to this park in Eindhoven and I said, ‘This can’t be any kind of derby, there’s nothing here.’ On Sunday, by the time they set everything up, it was treacherous,” said John.

“In those days we didn’t even see the liverpool trays, the water trays, but in Europe they had them already. So the next thing you know they’ve got water trays all over the place and the banks we thought were just decoration you had to jump them with the horse!”

Again Beezie prevailed, taking second in the Grand Prix and in the Derby on Northern Magic that weekend.

But their biggest challenge was yet to come.

With a string of top results, Beezie was named to the US team for the most difficult and most prestigious equestrian event in Europe—Aachen. Even John’s indomitable spirit wavered there.

“The first time we walked the course at Aachen, John asked me if I thought our horses could jump that high,” laughed Beezie. “I said, ‘Well, I hope so.’ And they did.

Beezie and John eventually did win enough to pay for their trip home. It was the first of many overseas trips—and victories—in the years to come and will go down as a footnote in a flourishing career that continues to reach new, unprecedented heights. (See: CP International.)

But for the Maddens, who married a decade after that fateful European tour, it’s one fondly memorialized by a framed newspaper clipping that hangs in their Cazenovia, NY home and a lifetime of reflection.

“It was just wonderful. Really a lot of fun.”