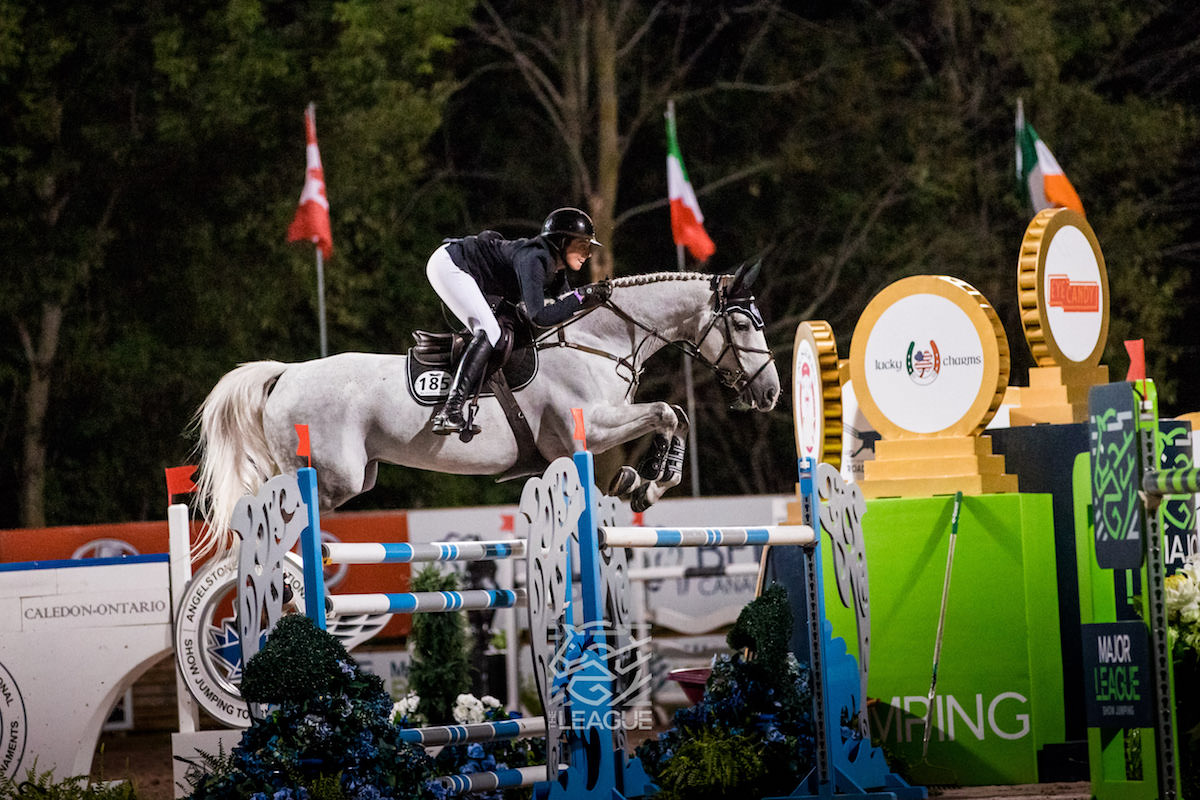 Phase IV of the Major League Show Jumping tour was undoubtedly the most dramatic yet.

Hosted for the second week in a row by Angelstone Tournaments in Toronto, the second of three stops in Canada saw major moves on the leaderboard and a major upset—or three.

Between fan favorite Eye Candy’s Round One elimination, Daniel Rihan’s unplanned dismount in the second jump off and a flurry of team substitutions, there were highlights and lowlights aplenty.

Spin and you’re in out

Eye Candy was leading the team standings by a nine point margin heading into Phase IV. With the Lucky Charms rivalry heating up, oddsmakers had the duo pegged to face off in the gold medal match for a third time.

Eye Candy was on their way to manifesting that showdown, too. Amy Millar posted a clear in Round One. Jacqueline Steffens was working on one of her own when her trip was interrupted mid course by a loose horse. Her teammate’s loose horse to be exact.

Paul O’Shea, preloaded in the ring, fell off a spinning Squirt Gun while Steffens was on course. After a few speedy unmounted laps around the ring and an unscheduled exit stage left, Eye Candy was a shock elimination.

Lucky Charms did make the top four, but were relegated to the bronze medal jump off where they faced off against Diamond Devils, ultimately landing on top with a speedy clear from Jordan Coyle and Picador.

Bluman is a believer

After winning the $217,000 CabanaCoast Grand Prix last week, Daniel Bluman (ISR) said a future appearance on an MLSJ team was not on his radar. Five days later, he wasn’t just on a team, stepping in for Brianne Goutal-Marteau (USA) under the substitution rule, he was on the winning team.

Bluman was singing a different tune by the end of the night.

“I have to say, I didn’t really understand the format before. I never really paid that much attention to it,” he shared.

“And that was my bad…I had to learn the format and I like it. I like it a lot, actually.

“I think it’s really smart. You have to jump one round. If you’re in the top four, you’ve got to jump one jump off, so it’s fair for the horses. It’s really exciting.

“[All four teams] go to the final jump off, some for the gold and some for the bronze. And that’s really cool because you’re going one on one, and you can speak a little bit of trash and you try you kind of do things that you wouldn’t do in our sport normally. And I like that. I think it puts some spice to it.”

A.I.M. stacked the deck in Toronto

“Lorenzo is normally my Grand Prix horse. He jumped two great classes last week, including a top 12 finish in a five star,” she said.

“When I knew we had Daniel joining us this week and Ashlee was bringing out Contefina, I needed to bring my big gun too so I chose to do [the MLSJ team event] as my warmup for the Grand Prix.”

Tyree posted a pair of double clears to help qualify A.I.M. for the gold medal match.

“I wanted to jump the second round, not the third round for the jump off because I knew I wouldn’t go so fast. But I was really happy with how he jumped. I thought it was quick enough and it put pressure on everyone else. And I was lucky to have Ashlee go so fast and give us that little bit of edge.”

Bond has made two MLSJ team appearances to date, the first last week at Angelstone Tournaments. Her horse has contested three. Contefina debuted for A.I.M. United at Traverse City in Phases I and II under teammate Sydney Shulman—Bond loaned her the homebred mare for the occasion—and jumped clear for Shulman in their inaugural MLSJ appearance and again with Bond in Toronto, posting the fastest first round and second fastest jump off of the night.

(Fastest jump off went to Ireland’s Shane Sweetnam and Birdy du Thot, who stopped the clock at 36.17 seconds to Bond’s 36.35)

Bond is feeling the heat

Bond is known for having nerves of steel in high pressure situations. Out of the MLSJ ring, it’s a different story.

“I find the first round to be extremely stressful,” she laughed. “For me, going in and jumping, I feel good. But sitting around after your team has gone is so stressful. You’re praying you get into the second round and then the second round I was like, ‘OK, this is the fun part. We just got to go and run around.

“It’s a great format. It’s exciting. Gets your heart going.”

She had reason to sweat, too. With a rail and a time fault from Bluman in the first round, A.I.M. United was at risk of falling below the cutline. They squeaked through to the second round in the number four slot when Blazing 7s collected two rails and a time fault to land on a score of nine faults.

A.I.M. United won it in the warmup ring

Bluman may have been late to the MLSJ team party, but he wasted no time embracing the team spirit. And stirring the pot…

Poised to go head to head against Otomi Warriors’ Daniel Rihan in the gold medal match, Bluman played a mental game that may or may not have contributed to Rihan falling off mid jump off.

“I mean, I had a friendly conversation with Danny [Rihan] before going into a jump off, but it was just friendly,” he laughed. “You know, my idea was never to see him in the ground! I was just trying to put a little bit of spice to the jump off.

A steady clear by Bluman put A.I.M. United on top the podium for the first time this season.

Major League Show Jumping next heads back to Traverse City for the fifth phase, officially the midway mark on the 10 leg tour.