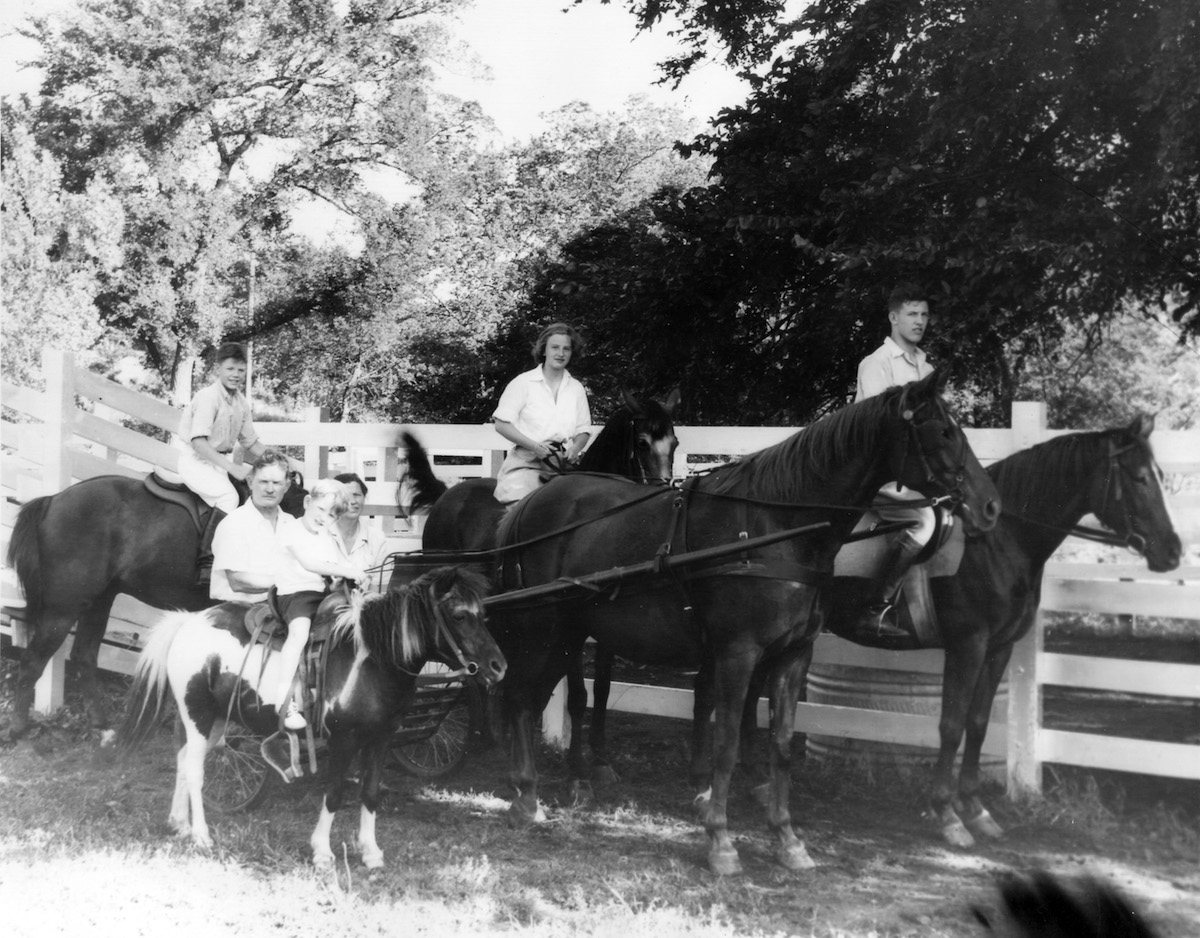 Known for his wit, irreverence, and whip-smart observations on equestrian sport and its participants, three-time Olympian Jim Wofford’s writing is as legendary as his performances in the saddle. Now he has brought his immense talent for telling tales—all of them (mostly) true—to the page in his autobiography. In this excerpt from Still Horse Crazy After All These Years, Wofford looks back fondly on the time he was thoroughly educated by an auction-bought pony with a loaded name.

As the summer of 1964 approached, Mom announced that she would have a new project for us when we arrived. You guessed it; she had been to the local livestock auction. We came home to the news that she had purchased at auction a 13.2-hand pony mare that was ostensibly safe to ride and drive.

You can see where this is going. The mare stepped off the stock trailer looking somewhat the worse for wear, but obviously taking a keen interest in her new surroundings. Did I say, “stepped off” the trailer? “Launched like a rocket” would be more like it. The gentleman delivering her seemed to anticipate this. He snubbed her up pretty quickly and made some smiling comment about how glad she was to get here. Turning down our offer of a cup of coffee and some homemade pie, he sped out the driveway. This seemed a bit odd at the time; later on, we understood.

The auction program had dubbed the mare “Miss Fortune,” and we decided to keep her name, not knowing it was spelled as one word, not two. I was about to say we led her back to a stall, but it was more that she bolted in that direction, and I just aimed her at the first open door. “Aw,” I thought, “she’s just a little skittish.” Ignoring these portents of disaster, Dan and I immediately decided to hitch her up and take her for a drive.

My older brothers and sister were the last children I know of who actually drove a pony cart to school. Pickup trucks had been invented by the time I came along. So, despite my varied farm upbringing, I had never actually driven a horse, much less a new pony. “How hard can this be?” I said to myself.

Here’s how hard it can be. Although we had a small corral with 4-foot board fence all around, we naturally just parked the breaking cart out in the middle of a 50-acre pasture and proceeded to tack up Miss Fortune. She kicked at the harness traces a few times and bucked a little, but she seemed to accept things fairly well; we put the bucking and kicking down to the natural high spirits of youth.

Mom drove up as we led the pony out. She parked her car and got ready to watch us put her new driving pony through her paces. We tried to back Miss Fortune into the extra-long shafts of the breaking cart, but we couldn’t seem to get her to do it. “Funny,” I thought, “she acts like she has never backed up before. Oh, well, we’ll bring the cart to her.” Talk about putting the cart before the horse.

Anyway, that’s what we did: held her and walked the cart up so that we could hook up all the straps and other stuff. She flinched when the shafts touched her sides but otherwise stood like a rock. Dan was not going to fit on the cart; there was no doubt who was going to have the honor of driving the newest member of our four-legged family.

He handed the reins to me and I climbed up into the flat seat of the cart, stuck my feet into the metal stirrups on each side, clucked to Miss Fortune, and slapped her on the rump with the reins as if I knew what I was doing.

Nothing. I clucked louder and slapped harder. Still nothing. I squalled at her pretty strong and cracked the reins along her flanks. Zip! She kicked out quicker than a rattlesnake and twice as deadly.

“That was close,” I thought. “Good thing this breaking cart has long shafts and she is up at the front of them, else she would have kicked my lights out.”

Still not fully aware of the situation, I yelled at her again, and flapped the reins even harder. Zip! Ping-ping! “I understand the zip part,” I thought. “That was her hind feet slicing through the air in front of me. But what was that ping-ping noise?”

Later I figured out that ping-ping was the sound of both metal studs breaking—you know, the ones that keep the horse firmly attached to the shafts, which keep the horse a safe distance from the driver? So I slapped the reins another couple of times; every time I did, she let fly with both hind feet, and now every time she kicked she wound up a few inches closer to me. The reason I figured this out was that her feet started to pass either side of my ears.

“Time to go,” I thought, and bailed out of that cart backward. And just in time, too.

Her very next kick made contact with the front of the seat. This gave her a split-second pause, and then she redoubled her efforts. That mare stood in one place and proceeded to kick the breaking cart into splintereens. By the time I rolled away, stood up, and dusted myself off, there was not enough left of that cart to make a good toothpick, and the harness was in a million pieces. I looked over at Mom, and she was laughing so hard she had opened the car door so that she could get her head down on her knees.

Dan was having a pretty good chuckle, too. When he settled down he said something about, “Next time, we will start her in the corral.”

“I’m not too sure about that ‘next time’ stuff,” I replied.

Miss Fortune went on to be a suitable ride for my nieces and nephews, but we never talked about hitching her to a cart again.

This excerpt from Still Horse Crazy After All These Years by Jim Wofford is reprinted with permission from Trafalgar Square Books (www.horseandriderbooks.com).

Feature image: The Wofford family’s 1949 Christmas card. Jim’s siblings, Warren, Dodie, and Jeb, are mounted in the background. His mom and dad are in the cart, he is on his faithful pony Merrylegs. Out of the six members of the family, four would be on an Olympic team between 1932 and 1984. Photo courtesy of Jim Wofford.