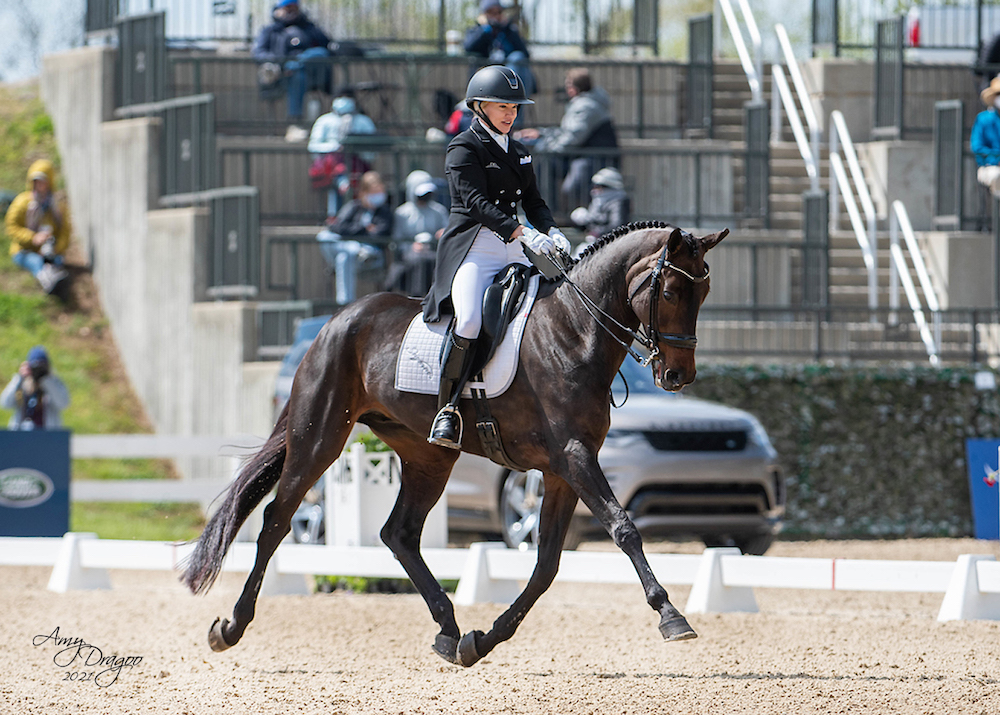 American Marilyn Little dropped the best 5* dressage score seen at the Kentucky Three-Day Event (K3DE) since 2009—a score of 21.7 penalties—to move into first place with her “horse of a lifetime” RF Scandalous.

(And it’s nice to hear that the feeling of driving into the horse park is as exciting to William Fox-Pitt as it is to everyone else.)

The snow may have melted, but it was a cold and very windy day in Kentucky for the first full day of competition. The 4* press conference included riders in winter hats—and they were inside!

By the time Little rode in the 5* competition the sun was out, and yet it was still windy and very cold for the Wellington, FL-based pair. The 2015 Toronto Pan-Am champion explained that their plan went a little sideways when the mare got a little “exhilarated” in the wind and weather, but she decided it was time to go for it in the ring. Their test was not only accurate and ‘clean’ but it was also expressive, uphill and quite dynamic.

“I was riding a little defensively for the first few movements, but then I felt her maturity coming through and we got braver as the test went on,” described Little. “She got some sparkling marks at the end and when you’re rewarded with marks from judges of this caliber it always feels good. She wouldn’t be the most confident horse by nature but she’s really grown into her own. She’s courageous, and always wants to do it right. I’ve learned to trust she will go in there and do her job.”

Sitting in second just behind Little is two-time defending champion Oliver Townend (GBR) with Cooley Master Class on a score of 24.1 penalties.

Last in the ring on Thursday afternoon, their test was confident, flowing and forward. It was every bit as consistent and accurate as Marilyn’s but lacked the wow factor of RF Scandalous. Astonishingly, their score of 24.1 penalties is the identical score they posted in 2019 when they won.

“This new five-star test is a more difficult test from a technical point of view than the last one,” said Oliver. “It’s not a dressage competition by any means but at least he’s put his best forward. He felt very relaxed and probably missed the crowd as it does him no harm to have a bit of atmosphere! He’s done very little since the last time he was here. He needs very little training in terms of dressage, it’s more about keeping him fit and happy and he knows his job very well.

“We always enjoy the crowds here as everyone is so enthusiastic and knowledgeable. We’re huge fans and we wanted to support you and be here. There’s no venue like this in the world and that’s no disrespect to the other five star events! The cross-country is a proper 5* course. I’m a huge fan of Derek di Grazia and I don’t think I’ve ever seen a 5* course which is this technical.”

Most recently at LRK3DE in 2015 just before a traumatic brain injury that could easily have been career-ending, Fox-Pitt admitted to being quite emotional to be driving into the Kentucky Horse Park and also quite excited.

“We’re very fortunate to be here at all this year,” said Fox-Pitt, thanking the fans who helped fund the event, and organizers who were able to pull it together.

Oratorio is not overtly flashy but their test was consistent, rhythmical and insanely accurate. They don’t have the best flying changes of the lot but they’re not the worst, and overall it was enough to leave them in third on a score of 27.9 penalties with half the field remaining.

When asked his thoughts about the cross-country course and specifically how they had managed to prepare given COVID-19 and then the EHV crisis, he admitted he will be drawing on experience and muscle memory as much as talent and luck.

“Given that we’ve done almost no showing in the UK in the last two years, I’m glad Oratorio has done this level before,” he almost laughed. “There are four serious water jumps all with great big drops in, and there are skinnies everywhere. Everything is very fair but it’s a true five star test and you’re going to want a galloping, genuine, athletic horse. I’ll be very pleased when Saturday is done. If anything we’re a little underprepared, but we’ve done what we can. Hopefully, he will remember what to do.”

And yes, it was a very welcome change to see him riding in a helmet, rather than a top hat finally.

In fourth is Boyd Martin (USA) with Long Island T on a score of 28.2 penalties, and in fifth is world number two, Tim Price (NZL) with Bango on 31.5 penalties.

After the first day of 4*-S dressage there’s currently a three-way tie for first place. Liz Halliday-Sharp (USA) with Cooley Moonshine, Tamie Smith (USA) with Danito and Doug Payne (USA) with Starr Witness are all equally tied on 71.91% or 28.1pp. British Olympic gold medalist Leslie Law is hot on their heels with 28.5pp followed by Boyd Martin (USA) and Luke 140 on 31.1pp.

Four-star dressage resumes Friday at 7:45am, followed by five-star dressage at 12:15pm. Don’t forget the cross-country timing has been reversed based on the weather forecast for Saturday. The 5* will run in the morning and the 4* right after. Keep an eye on kentuckythreedayevent.com for changes to the schedule and remember the live stream is free in North America through USEF Network.

And don’t click on any of the spam posts asking for your credit card.