Is Carnage the Right Word? Deconstructing the 5* Cross-Country Day from Kentucky 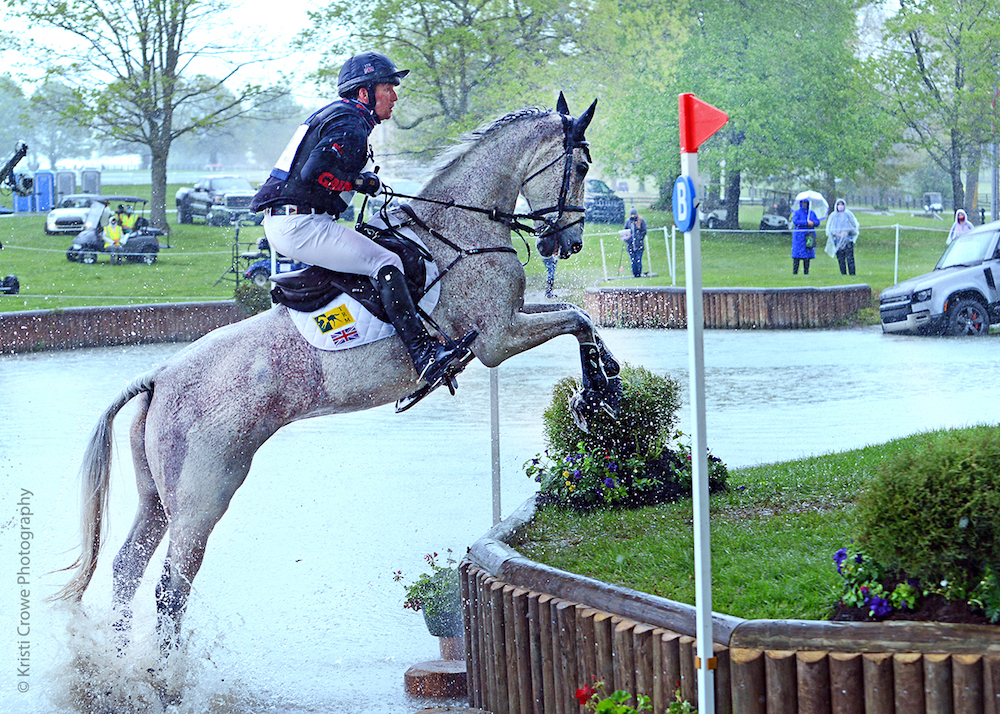 In our admittedly small (virtual) circle watching the CCI5*-L cross country live-stream Saturday from the Land Rover Kentucky Three Day Event the word “carnage” was tossed around a fair bit.

You always expect there to be a few falls and, based on things like the weather forecast, you always wonder who will be able to make the time. There are always ‘educated’ guesses. But as we were reminded all too well today, sport is sport and the mighty can fall just as easily as the maiden.

Following cross country, the 5* leaderboard is still top-heavy with world number one and two-time defending champion Oliver Townend (GBR) in the lead. But he’s swapped horses. It’s Ballaghmor Class (who has never finished outside the top 5 at the 5* level) who dug down deep and put forth a gutsy effort in the sheeting rain. The pair finished just 0.8 seconds over the time allowed and on a score of 27.3 penalties.

Townend and Ballaghmor Class got a little lucky at the Rolex Grand Slam Water. Following a dodgy jump in that knocked them off their line, it was only ‘Ollie’s’ quick thinking and reflexes that enabled them to regroup and present to the double-lettered black-flag option and complete the combination.

“He lost a shoe at fence 7 and it’s really slippy!” remarked Townend. “He’s just shown his class and quality. He kept slipping and I had to really be slow on the hills and turns and protect him. But every time I said “go” he put his head down and just went as fast as I’ve ever gone on a XC course.”

IF everyone passes the jog in the morning (and that’s never promised), it will come down (as it always does) to leaving the jumps up in the stadium ring. One stadium pole is worth four points. The spread of those four points currently runs from first through eighth.

Boyd Martin (USA) is sitting in second on the lovely On Cue, having bookended her ride with falls on either side. Early in the day, he parted ways with Long Island T coming out of the Head of the Lake. (Remember the TREE from the course preview? Yeah, there.) Later, and nearly at the end of the course, he and Tsetserleg TSF caught a leg in the final combination and tumbled. He’s is in good company there. William Fox Pitt (GBR) did exactly the same thing in exactly the same place.

“One thing I’ve learned from watching guys like Tim and Oliver,” said Martin, “is that if you want to win you’ve got to take a crack at it. You can’t save them or take the options. There’s no shame in going for it. I think with Tsetserleg, he was getting a little weary coming home and I was looking ahead and perhaps assuming rather than sitting back, supporting and lifting him up.”

World number two, New Zealand’s Tim Price was one of just THREE to come home inside the time allowed, with his veteran partner Xavier Faer. The other two were Australia’s Kevin McNab and Scuderia 1918 Don Quidam and the remarkable Harry Meade of Great Britain with Superstition. (Meade is just back to this level of competition following a massive head injury.)

In doing so, Price jumped up from 11th to third, Meade from 17th to fourth and McNab from 21st to now sit equal fourth along with Jonelle Price (NZL) and Grovine de Reve.

“My round was actually very smooth,” commented Price. “Xavier Faer has a few skeletons in his closet such as ditches, and sometimes he will hold his breath and become a little unrideable. Today he went out on his game. He has good scope and strength and we were able to be inside the time because I didn’t have to make a lot of adjustments and could keep moving forward.”

The overnight leaders, Marilyn Little (USA) with RF Scandalous, added an uncharacteristic 28.4 time penalties to their record-setting dressage score of 21.7 penalties and are now sitting in 32nd on 50.1pp. Tamie Smith (USA) and Mai Baum, who had been sitting just behind on 21.8pp, added 11 penalties for hitting a fence and (thankfully) breaking a frangible pin. They’re in 18th.

Now that all 61 5* riders have attempted Derek di Grazia’s course, the analysis debate begins. Was the course FAIR relative to the level of preparation available given the state of the world in 2020 and early 2021? Were there MORE falls than usual this year? How much did the weather, the course or the preparation (or lack thereof) of some riders come into play?

In the end of day press conference, Oliver Townend spoke to these thoughts briefly.

“Today was right up there with some of the toughest five stars in the world. It’s my job to have the horses prepared and be as prepared myself as possible. I don’t think anything was ideal preparation—this is as tough as it gets.”

From my *purely non-scientific and not nearly Equi-Ratings worthy* gut feel, the course didn’t feel mean. It didn’t feel trappy. It felt like a true five-star course that rewarded commitment and bravery, made you think, and made sure you were accurate. So, I’m not sure ‘carnage’ is an accurate assessment. (Unlike the 4*-short cross country. More on that in a minute.)

From rookies to gold medalists, the course, the weather and let’s not forget COVID, all took their toll. It’s a long way from decided though, at the #bestweekendallyear.

Now about the 4* Cross-Country…

OK! First of all, as crappy as it is that the 4* riders got “flipped” timing-wise, knowing they were heading into the worst of the rain, I think it was the right decision. Kudos to the organizing committee and welcome to pleasing “none of the people, none of the time.”

Having said that, “carnage” is the appropriate word to use for the 4*-s cross-country and we should likely be generous and attribute most of that to the appalling conditions (rain, and lots of it) today. It truly separated the field today resulting in massive jumps up (and down, and right off) the leaderboard.

Alyssa Phillips (USA) with Oskar added the fewest (5.6) time penalties to her score. (Note: not one 4* horse made the time allowed). She moved from 15th to second, edging Colleen Loach (CAN) with Vermont down one into third.

“We definitely had to work for it,” said Loach. “He tried his heart out, even if we didn’t get perfect distances. Hopefully, we will come back and find he learned a lot. The footing wasn’t that bad, it was mainly the tack and the reins that got slippery.”

Canadian team veteran Jessica Phoenix piloted Bogue Sound from 28th up into sixth, and Rabbit from 42nd into tenth—both “in the mix” heading into Sunday. And Alex Baugh (USA) brought Mr. Candyman from 37th into ninth.

Retaining their lead are Tamie Smith and En Vogue who are currently sitting on a score of 35.0 penalties.

“She was amazing—it was easy,” commented an excited Smith after her round. “She learned so much from going to Tryon last fall. I think we expected that with Derek [di Grazia] it would be a challenging course and I had trouble on my other horse, who was a little bit green. It’s fun to be able to put them to the test and have it work out, especially in the mud and the rain. She was so uncertain of herself last year and now she couldn’t care less.”

Sunday will surely be an exciting finish from the bluegrass!

Click here for the full 5* leaderboard with faults at fences and results.

The third horse inspection will be streamed on Facebook Live @KentuckyThreeDayEvent and stadium jumping will be broadcast live for FREE. Get the link through www.kentuckythreedayevent.com