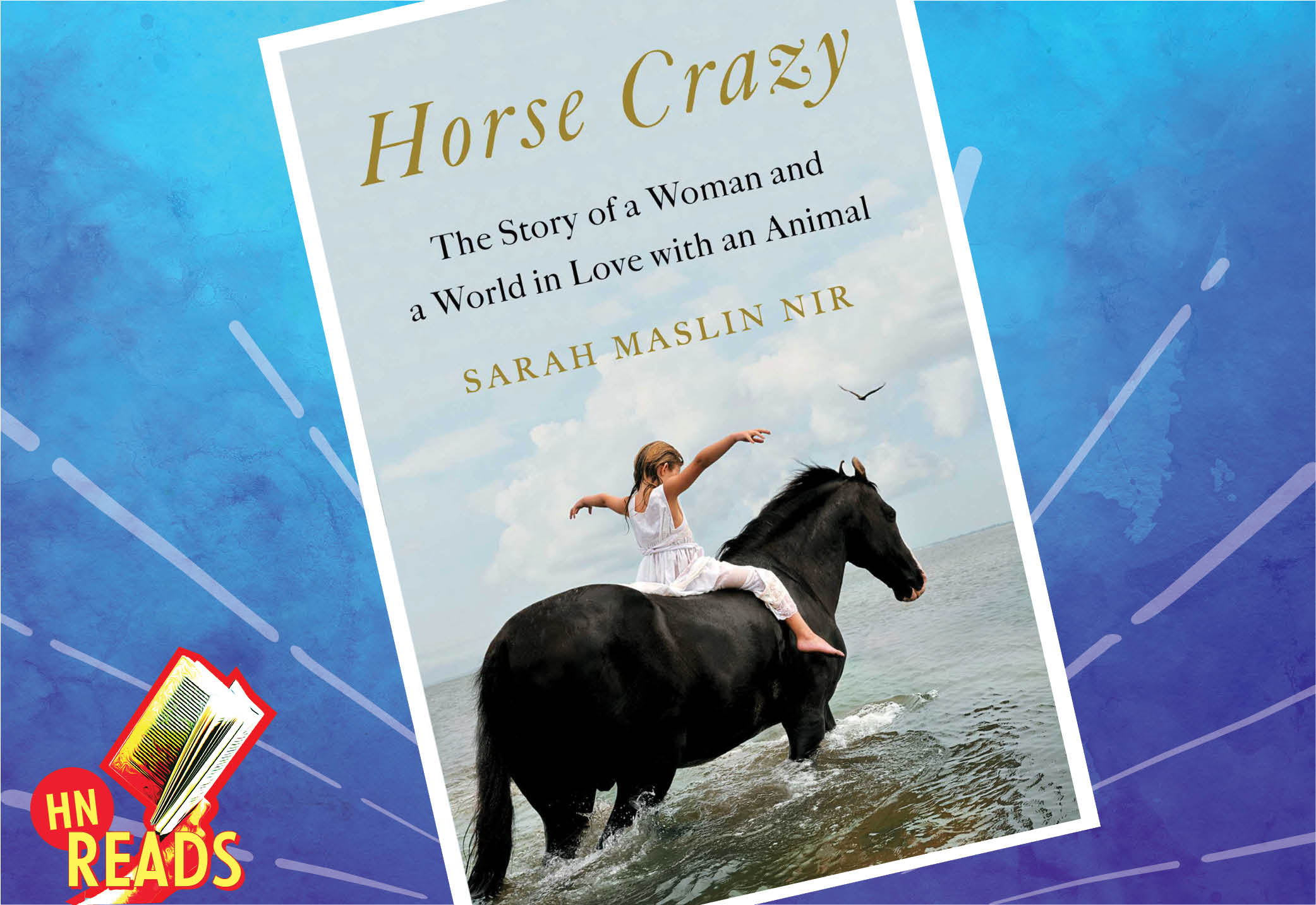 Once on a call that stretched from Manhattan to Tel Aviv, Sarah Maslin Nir’s Aunt took a second to realize who she was.

“Sarah? Who loves Sousim?” she asked, using the Hebrew word for horse.

Like many of us who claim membership to the tribe of Equus, horses are what mark the identity, the perspective, and the soul of Sarah Maslin Nir—even when it is just on the phone. Her new memoir, Horse Crazy: The Story of a Woman and a World in Love with an Animal, is a love letter to the animal who both kept her feet on the ground and her spirit flying.

And it doesn’t disappoint.

Horse Crazy is the horse book of horse books, full of adventure, obsession, nasty falls, and dissections of how horses and human culture intersect. It ranges widely across breeds and experiences, including a grumpy Belgian Police horse, Misty of Chincoteague, who has become the emblem of horse girls everywhere, a few curly eared Indian Marwaris who now graze on pastures in Martha’s Vineyard and many others.

Outside of her horse life, Nir is a Pulitzer-Prize-nominated New York Times reporter and she covers the stories that are shaping. She recently reported on the “Central Park Karen” story and in March contracted COVID-19 after going to a hotspot to chronicle the outbreak.

Nir uses her journalistic prowess in Horse Crazy, too. Embedded in the book are fantastic extra facts that give the reader just enough context to expand the experience without bogging down the pacing. Nir is also an expert braider, often twisting her deeply personal story into that of the horses on the page.

One of the main characters who winds in and out of the book is her late father, Yehuda Nir, who was a prominent psychiatrist specializing in post-traumatic stress disorder. He also wrote a memoir. His, a book about surviving the holocaust as a Polish Jew by pretending to be a Catholic.

It’s an experience that even shows up in Nir’s horse life. At the Hampton Classic, when a teenage Nir could not be found to collect her ribbon, her father got it for her. “He turned to the judge raised his arms and uttered the immortal words: ‘I defeated Hitler!’” recalled Nir.

Despite this defining moment, Nir writes that her father never comprehended or encouraged her love of horses, yet throughout the book horses are what teach her to understand and admire both his complexity and his brilliance.

Nir also writes about feeling like an outsider throughout much of the narrative. At horse shows she was often the only Jew in the ring. At home, she longed for a deeper connection with her ambitious, high profile and usually absent parents, and her emotionally icy brothers.

These reflections are often poignant and give the memoir a deep humanity. However, they are not as vibrant and thoughtful at times as some of her other writing. It is a shame that Nir did not dive deep into the cultural intricacies that left her feeling on the fringes of the elite worlds of upper crust New York and high end horse shows because the evaluation would have been fascinating to read.

Nevertheless, Nir is one of the rare horse authors who can balance good writing in one stirrup with good riding in the other. Her ability to craft action scenes, even shattering accidents, will leave horse lovers and readers alike chewing on their fingernails and flipping to the next page. In addition, Nir’s own hard-won horse sense, cultivated on the backs of an encyclopedia of different horses, is a treasure within itself.

Horse Crazy reminds us why we all ride in the first place and why the soft nose of a friendly horse is always a place to find solace.

See Sarah Maslin Nir on HN Reads, the Book Club, January 13, 2021—LIVE on Facebook, YouTube and Horse Network. Brought to you by Equishopper!