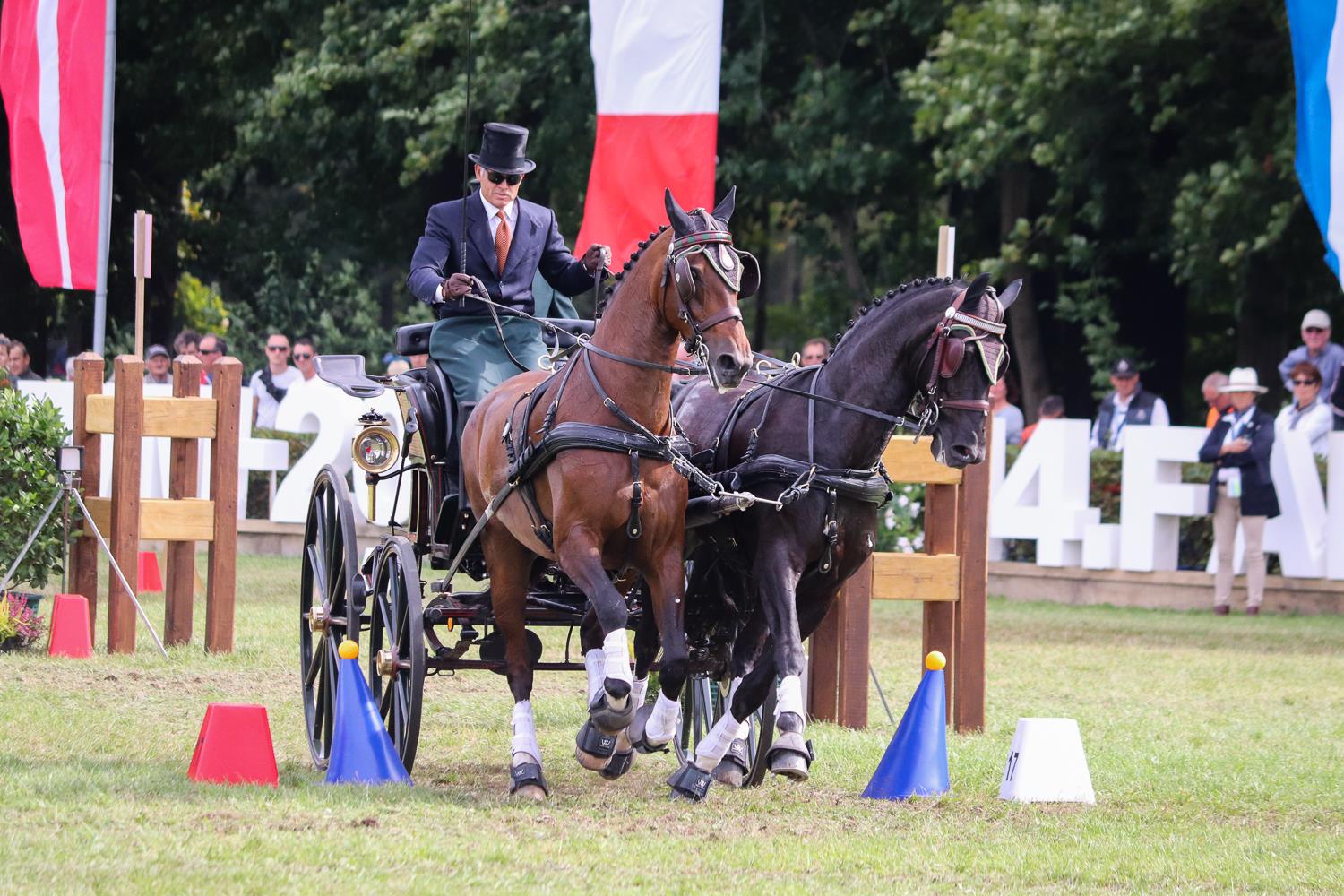 Two years ago, American polo player James Miller took up the reins on a new equestrian hobby and started combined driving with a pair of horses.

Last week, he made his World Driving Championship debut for Team USA in Drebkau, Germany.

It was precisely the goal he wasn’t aiming for.

First, a bit of history…

Married to World Equestrian Games team gold medalist Misdee Wrigley-Miller (USA), James has had a ringside view of the combined driving world for nearly a decade. It’s what made him not want to dip his boot in the discipline. (Combined driving, if you’re not familiar, is a sport conceptualized by HRH Prince Philip and modeled after the mounted equestrian discipline of three day eventing; three phases over three days, including the high adrenaline second-day phase of “marathon.”)

“I always knew [combined driving] was tough,” said Miller, who has been pleasure driving in the four-in-hand sport of Coaching since 2010. “The amount of time necessary for training, travel and competition that Misdee was putting into the sport deterred me from adding another equestrian discipline to an already demanding polo and Saddlebred competition schedule.”

Then Miller turned 50 and decided to try his hand at a less risky sport. Or so he thought.

“You hit 50 and think, Yeah, maybe I need to get into a transitional sport. But I’ve since learned that combined driving can be absolutely as dangerous as polo,” said Miller. “So you have to respect it much the same.”

Now that he’s in the driver’s seat, he has a newfound grasp on the skill, speed and precision it takes to helm a team of horses through a precise dressage test, maze of obstacles and narrow cones courses.

“Of course, watching driving and doing it are different [things]. I have a tremendous appreciation for what everybody is doing in the sport firsthand now,” continued the Sarasota, Florida-based driver.

“With Boyd’s instruction, I’ve been able to fast track a bit,” understated Miller, crediting the team behind him with his rapid ascent to championship competition.

Ironically, last week’s World Driving Championship was the exact challenge he was aiming to avoid when he took up the sport less than two years ago.

“Boyd and I have made a commitment to each other that we wouldn’t force my training because Misdee, she rushed to make a Pairs Championship for the US [Team] when she first started the sport and it was quite stressful. I was there with her for the whole journey and I just asked everyone who encouraged me to start driving, ‘I want to do this a little more slowly and make sure we’re still having fun,’” said Miller.

The US Equestrian Selection Committee had other ideas, however.

Miller was selected to represent the red, white and blue alongside Jacob Arnold and Steve Wilson at the bi-annual World Driving Championship for Pairs in Drebkau last week. Some 82 Pair teams from 24 countries made the trip to Germany. Sixteen flags contested the team competition.

There was just one hitch in his plan… Miller doesn’t have a regular pair of horses.

“We’ve been mixing and matching horses for the past two years, trying to figure out what’s the right pair of horses for me. Then I’ve had some typical injuries with a few of the horses,” he explained.

“It is what it is,” said Miller. “I’m lucky to have access to really nice horses where I can put different combinations together and see what I can come up with. The challenge, of course, is to borrow someone else’s ingredients and somehow bake the same blue ribbon cake.”

Catch driving, as it were, has its perks and its drawbacks for a developing driver.

“When you drive different horses, you learn a lot. You find out all the different nuances of horses, so you might be able to use something you learned with one horse when you’re training another horse,” said Miller.

“You certainly learn to handle the unexpected because you’re adding in uncertainty just by the sheer fact that you’re using horses that you don’t know well. But, when you slip the clutch or oversteer on a Ferrari tuned for someone else, you sometimes stall out or crash and burn.

“There’s no question that every time I drive I always wish that I had two horses that I knew pretty much what they were going to do and I could be ahead of them, I could predict some of their idiosyncrasies and try to head them off before they do something they aren’t supposed to do. Not much different than polo horses.

“Because I’m in the learning process, it’s fine. It’s a good situation.”

It’s also a nerve-wracking one and Miller set his expectations for Drebkau accordingly.

“Boyd has stressed going and getting the experience [at the championship level] so maybe in two years, if I’m able to continue and improve and I’m the right fit for the US Team at the next World Pairs, then I have that experience under my belt,” he explained. “And [it was] an opportunity to improve.”

Turns out, it was an opportunity to contribute.

Out of 82 starters, Miller finished top 20 in dressage (19th), tied 54th in marathon, and finished top 25 in cones (25th) with the top USA result (6.53 penalties). He ultimately finished just outside the top 30 individually (32nd), a mere five points off a prize money finish.

Team USA took eighth place among the 16 countries, with all three of Miller’s results counting toward the team score.

The gold medal went to Hungary, with driving heavyweights the Netherlands and Germany claiming silver and bronze, respectively.

But for Miller, Drebkau was just the beginning.

“Being able to compete alongside Steve and Jacob certainly made it a worthy experience. I think it’s great to be able to compete for the United States, and I think our sport is wide-open for new competitors,” he said.

“I would encourage anyone who has any aspirations in horse sport that they look at American driving as an opportunity not only to develop in a new equestrian sport, but also as a chance to possibly represent their country on the international stage.”