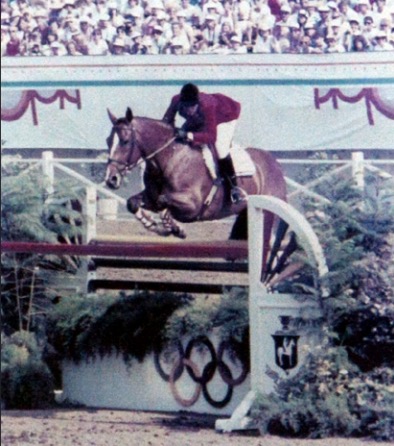 The members of the 1984 Los Angeles Olympic Team, full of Hall of Fame horses and riders plus our chef d’equipe, had one major goal: to win the Team Gold medal for the United States.

In past Olympic Games, Billy Steinkraus had won the Individual Gold in Mexico City in 1968 and the American Show Jumping Team had won Silver, but the team Gold had remained elusive. 1984 proved to be the year that the Team Gold was finally won by the U.S. (a success that was later duplicated in 2004 and 2008).

From my perspective, there is nothing quite like the feeling of representing your country in international competition. And there is nothing like the feeling of a clear round in Nations’ Cup competition, unless, of course, it is a double clear! Nations’ Cup events push you to do your best, so as not to let your teammates or your country down. There is considerably more pressure in team than in individual competitions simply because so much is riding on them … literally.

After a long selection process that stretched from March to July, the team of Joe Fargis/Touch of Class, Leslie Burr/Albany, Conrad Homfeld/Abdullah and myself on Calypso were chosen for the Games to be held on our home turf in August. It turned out to be a difficult choice for the selection committee as it was clear the U.S. could have easily fielded two or three elite teams that year. Horse/rider combinations such as Anne Kursinki and Livius (1 st reserve), Michael Matz and Jet Run, Norman Dello Joio and I Love You, and Katie Monahan and Noren were left in the wings.

I remember George Morris saying that what stood out about the ’84 team was that each of the horse and rider combinations had won major Grand Prix and could be counted on to produce clear rounds on the most important occasions. He called us the Dream Team of show jumping that year because we were all winners at the top of our game and sport.

In those days, the opportunity to compete as teammates was rare unless you were selected for a summer European tour. All of us had competed against each other on many occasions at national horse shows and a few times in Europe and with that depth of experience, we trusted that our best individual performances could add up to a win for the team. It certainly helped that all four members were equally strong. Joe was our lead-off rider with Touch of Class in the Nations’ Cup and he produced a textbook clear in the first round. Leslie had 4 faults with Albany and Conrad finished with 8 on Abdullah. I felt honored to ride the anchor leg, bestowed on me by chef d’equipe Frank Chapot following voting by my teammates. I remember Conrad’s words to me as I prepared to enter the ring: “Just go clean.

Calypso came through with a brilliant clear to match Touch of Class. Since each team can drop a score in each round, Conrad greeted me afterwards with relief, saying, “Thanks for erasing my 8.” Of course, he paid me back in the second round as his beautiful clear round assured a U.S. victory after the third rotation of riders. We were so far ahead that I, as anchor, didn’t even have to jump the second round. We had already won the Gold! There are many things about those Games I will never forget. One of them is riding into that arena in Santa Anita with the hometown crowd cheering wildly and then hearing the hush fall over the crowd as Calypso and I circled and prepared to begin the course.

This was repeated with each rider. When we all rode in for the final awards, the jubilation that greeted us was staggering. Our grooms, who had played such an integral role in our success, accompanied us into the ring to share in the glory of the ceremony. As we stood on the podium receiving our medals, we all were beaming. When the national anthem began to play, I knew I would cry. I often do when I hear it, but to my surprise I was grinning so broadly from ear to ear that all I could do was think, “YES! We did it!”

We had reached our goal of winning the first Olympic Gold Medal in Team Show Jumping for the United States of America. For icing on the cake, Joe and Conrad would go on to win Gold and Silver in the Individual competition a few days later, but it was that moment when we won the first-ever Team Gold for the U.S. that I will remember forever.