The Tao of Mediocre Dressage 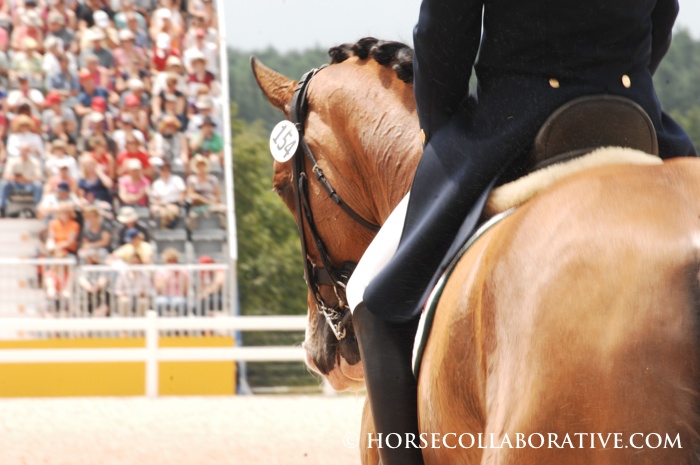 I was swing dancing one night, and the concept of tension kept spinning around in my brain.

Not chick-flick tension, but the rubber-band-like feeling between partners that lets them communicate what move comes next. If the tension is too loose and there’s no communication; it’s dancing with overcooked linguini. Too stiff and you’re dancing with a 2×4.

“Wait,” I thought. “This is just like learning dressage.”

I don’t recall much about the poor fellow I was dancing with, but I remember examining his hands, noticing how in closed position his hand on my back worked just like the outside rein, providing support and balance, while his left hand was there to cue what came next.

In equestrian sport, the idea of “dancing horses” isn’t new. It is an ancient cliché that has crossed centuries and cultures.

“Dancing and dressage were also both part of the French Court,” author Sari Wilson once told me. She had recently published a novel about ballet, and then we geeked out, talking about how both disciplines were obsessed with the perfect line and the correct position.

In the court of Louis XIV, ballet and dressage became fixtures associated with the palace of Versailles. They were used as displays of power, wealth and exacting etiquette. Some historians claim that Louis understood that if his courtiers were too busy with exacting niceties, they wouldn’t have time to think about overthrowing him.

While no one is plotting a coup with pirouettes anymore, both ballet and dressage continue to focus on athleticism, precision and a series of specialized movements.

And both are disciplines with which I have limited personal experience.

I got kicked out of ballet when I was four years old and I grew up riding horses through the woods, more often avoiding wild turkeys than practicing frame. I am also one of those people who is built more like corgi than the waif-with-the-strength-of-ox required of a Balanchine ballerina.

However, I love to dance, and I get more and more out of dressage with every lesson I take.

I love that dressage, like the Chinese philosophy of Taoism, values the flow of things above most else. The sport rewards observation, relaxation, and using the natural dynamics of both the horse and the human body. I like that it is a puzzle and an exercise in lightness and quickness.

I like it because I am so unlike it.

I am not by nature, a person that goes with the flow. I am called “pigheaded” often. I’m a grit my teeth, muscle through kind of girl. Learning dressage challenges me to rethink my stubborn ethos every time I climb in the saddle, and I am a better rider for it.

What I have learned in my dressage lessons has come in handy on trails, on backyard ponies, or helping friends in show rings. It has been useful on every type of horse I have had the privilege of riding no matter how stocky or refined.

A bonus is that I am more and more in awe every time I watch a horse and rider piaffe, shoulder in or, heck, ride a straight line with ease. When I watch dressage clinicians like team USA’s Steffen Peters, I now actually understand what they are saying.

I will probably always be pretty dang mediocre at dressage, but for many of us, Olympic Gold isn’t really the point. The point is to ride well and to know as much about our horses as possible—and dressage offers that in spades.

Gretchen Lida is an essayist and an equestrian. Her work has appeared in The Washington Post, The Rumpus, the Los Angeles Review of Books, and many others. She is also a contributing writer to Book Riot and the Washington Independent Review of Books and currently working on her first book. She teaches composition in Illinois, lives in Chicago, sometimes resides on Nantucket Island, and is still a Colorado native. Find her on Twitter at @GC_Lida.