Let’s all take a moment to TALK ABOUT ME…

The recipients of the 2018 Equestrian Canada (EC) National Awards were announced yesterday and my name is on the list. Look!

“In memory of Susan Jane Anstey, and in recognition of her invaluable contributions to Canadian equine interests, Equestrian Canada (EC) presents the Susan Jane Anstey Trophy to an exceptional individual or corporate entity who has delivered outstanding media coverage that served to enhance the image of Canadian equine interests to the Canadian public. Carley Sparks of Toronto, ON is the recipient for 2018 in recognition of her innovative approach to promoting equestrian sport and industry in Canada.”

How great is that?! For me.

For you, it’s a non-starter. To be honest, I would have been happy to file the press release away in the compliments and complaints folder I keep on my desktop (don’t judge me), but Elayne Fowler, Horse Network’s CEO, says it’s important to share our successes and the only thing that felt more cringy than writing a post about an award I received was asking one of our amazing writers to pen a post about an award I received.

So here we are!

I was tempted to just share the press release and be done with it, but I’m morally opposed to running press releases as news items. Also, our good friend Google Analytics says that’s not an effective means to distribute news. Instead, I’m going to share a few a insights about the press release that you might not otherwise know—for your infotainment.

True to the conventions of Tinder, the headshot included in the press release is dated. I look older IRL. Also, I provided that photo.

Despite appearances I am not in love with the French Olympian featured in the other photo above. I know it looks like I’m gazing adoringly into his eyes, but that’s just how I look at people I’m interviewing. Invested. If I gave you the wrong impression, well, that’s on you. (Also, you wouldn’t be the first. It happens more often than I care to admit. Thanks for documenting WHY, Erin Gilmore.)

Seriously, though, interviewing people who are passionate about what they do is just about my favorite thing. It’s a privilege to tell a small part of someone’s story. And if they happen to cry in the interview, all the better. (Happy tears are preferable. I’m not a monster.)

This award is actually very special to me. Susan Jane Anstey was a pioneer in Canadian publishing and one of the first people to pay me to write. She forever holds a special place in my heart and is in part to blame for all of this (*waves hands around*). If it weren’t for her and daughter Jennifer Anstey’s support, I might never have started the show jumping blog that landed me a job at Horse Network that made me a living repository of ridiculous show jumping facts. For instance, did you know that Israel’s Daniel Bluman had a side hussle in high school selling women’s underwear to his classmates? You do now!

One version of the press release says that Horse Network is my company. It’s not. Horse Network is a wholly owned subsidiary of Wrigley Media Group, which is majority owned by 2018 World Equestrian Games driving team gold medalist Misdee Wrigley Miller. There is an incredible team of brilliant minds who initially conceived and brought to life the Horse Network magic and many more who continue to do so today—I’m lucky to work with them.

Susan Jane Anstey was a serious journalist. Nothing about the press release suggests that I share that attribute. Case in point: “Utilizing her unique style of writing, Carley generates light-hearted content that is easily digestible for everyone, including those not familiar with complex horse terminology.”

Our in-house video editor, who is non-horse person, onced asked me if I dumb down my storytelling style to accommodate the masses. No, Aaron, that’s just how I write.

[Note to self: Is “unique” ever really a compliment?]

Also, from the press release: “athletes appreciate Carley’s ability to present them in a positive and fun light that contributes to their brand and ability to engage their fans.” I can’t fact check that statement with any sort of reliability (George Morris and Robert Ridland aside, very few people can be trusted to criticize you to your face). I can tell you I once wrote an April Fool’s Day story announcing McLain Ward’s retirement that was referenced as a career fact in an FEI press release when he reached number one on the world rankings a year later. To date, it’s the highlight of my career.

Many years ago, I nominated myself for the Susan Jane Anstey Media award and did not win. This year, Canadian Olympian and my dear, dear friend Amy Millar surprised me with the nomination, which is ironic because 1) she only ever wants to write stories with me when other people suggest it and 2) WHY DIDN’T I GET HER TO DO IT 10 YEARS AGO? Moral of the story: It’s always preferable to get an Olympian to put your name in the hat for any award. 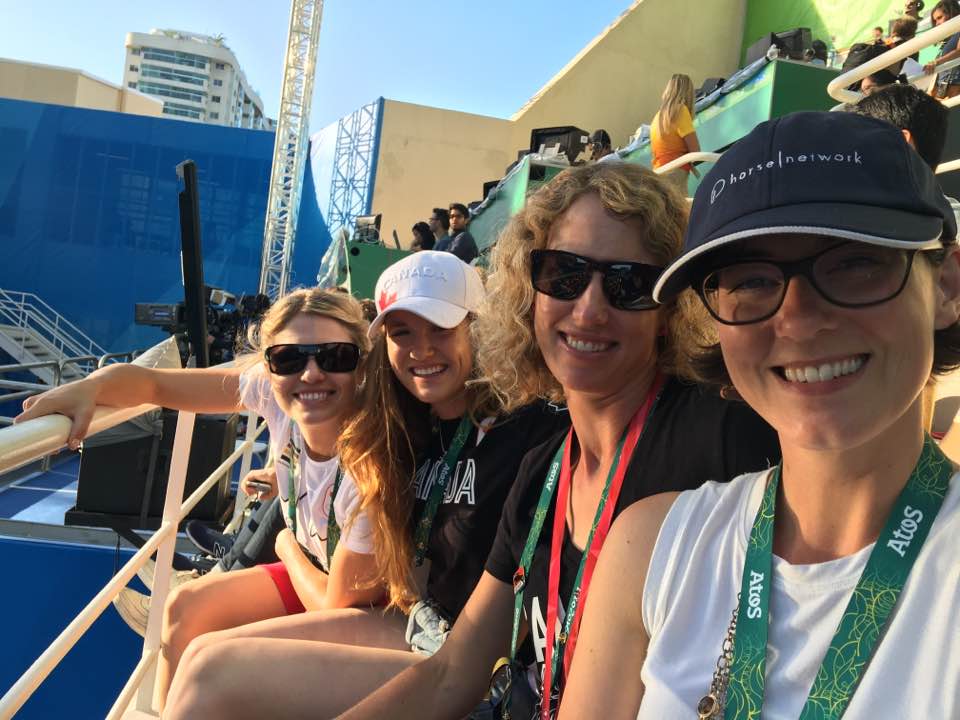 Thank you for the recognition, EC! You’ve made Elayne and my eventual obituary very happy.