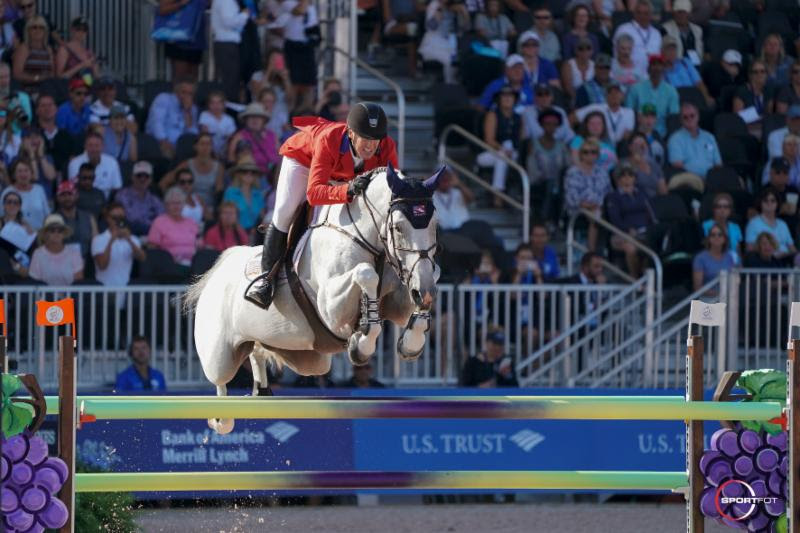 You might think he’d already gotten there, what with the double Olympic gold medals, World Cup title and 500,000+ Grand Prix titles to his name. But you’d be wrong.

Because Friday’s performance, the clutch clear that captured the gold medal for Team USA at the FEI World Equestrian Games™ (WEG) in Tryon, NC, was an epic piece of riding from an athlete already sporting more feathers in his cap than Danielle Goldstein’s colorful extensions.

And like all great moments in sport, it was one awash in dramatic tension.

Ten nations returned to contest the medal-deciding round of team competition. As the rails fell and faults added it up, USA and Sweden rose to the top of scoreboards, duelling factions locked in battle for gold.

Exactly four points in front, Team USA was sitting on 16.59 penalties after a single rail from Devin Ryan (Eddie Blue) and a clear from Laura Kraut (Zeremonie). (Adrienne Sternlicht and Crystalline, a rail and a time fault.) With just Ward to return, they needed a clear from their anchor to take the win outright.

But a collective gasp from the crowd told another story. Ward and Clinta caught a rail mid course to force a jump off, the first in team jumping history at WEG!

Pretty sure my entire neighborhood heard me scream “FUCK” when McLain pulled that rail.

sorry to my entire apartment complex bc I was just screaming at the top of my lungs watching Mclain’s WEG round for gold. Also gave myself an ulcer watching. WE HAVE A JUMP OFF FOR GOLD FOLKSSSS

Tensions at an all time high, the Swedes and Americans returned to face off for one final round. All four riders jumped again with times and faults collated.

First to return for Sweden, Von Eckermann poured the pressure on, posting a fault less round in 32.99 seconds.

Ryan answered with a clear for Team USA in 34.88 seconds.

Baryard-Johnsson opened the door when she and and H&M Indiana caught a rail in 35.39 seconds.

But Sternlicht posted the same total in 34.61s.

The gold came down to Fredricson and Ward.

In a nail-biting finish, the Swede put the screws to the American with a clear in 34.43 seconds. Team USA needed a clear to win and a fast one at that…

The USAs gold medal is in the hands of McLain right now and if anyone can bring it home, it’s him

“It has been a very long three or four days and I take my hat off to Sweden,” said Ward. “I knew the situation. I had one fence down and then I knew I couldn’t afford a time fault. I got a second opportunity in the jump-off. I wanted to go in and just do the best round I could. All the guys came through brilliantly and I am so proud to be American today.”

Which brings us to Ward’s GOAT status (“Greatest Of All Time”). Because equally awestruck was everyone watching at home:

McLain Ward is incredible…that is all thank you

I feel like McLain Ward may be the George Morris of the 21th century, at least in terms of popularity

McLain Ward is amazing ! What a ride what a horse , he flies over fences https://t.co/dJMJBA1KvS

Once upon a time, @AdultAmmyStrong and @espressoponies helped me check off a HUGE bucket list item and meet McLain Ward. #theGOAT pic.twitter.com/pDQ1QQS9jm

The top 25 riders return for Sunday’s individual medal final. But how anyone could top Friday’s performance remains to be seen.