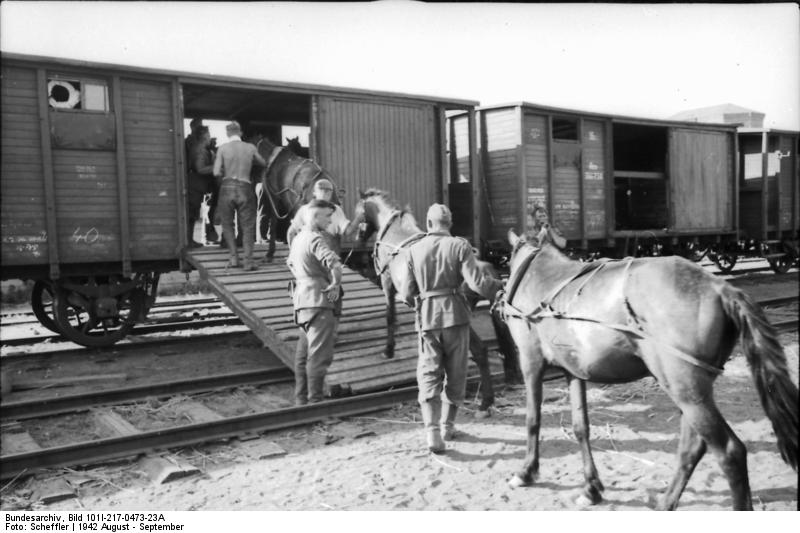 That simple time when horses were horses and no one travelled further or faster than their trusty steed could carry them. Or did they?

While shipping horses in trailers designed to be pulled by motorized vehicles didn’t become a viable option until the 1950s, (1912, for short distances), humans have successfully transported horses across seas and nations since before Christ. It just wasn’t necessarily a pleasant experience at the time.

In the beginning, there were hooves

The simplest way to transport horses long distances before the invention of the horse trailer was, you guessed it, on foot. It was also the most time consuming (see: walking), least accessible (weather and terrain permitting), and most likely to exhaust your horse.

According to the Museum of the Horse, British socialite/adventurer Lady Hester Stanhope records that her brother James once rode a horse for 2,000 miles—at one point, travelling 900 miles without rest and only dried peas to eat. Fun road trip!

If history tells us one thing, it’s that humans are nothing if not industrious. Particularly if there’s a war to be won.

Shipping horses by sea is one such example of that. The practice dates back to Ancient Greece—with the earliest known record provided by Greek historian Herodotus via a seal impressed with a horse in a boat from 1500 B.C. To be clear, that’s 1,500 years BEFORE our calendar even started.

By the early Middle Ages (fifth century), horses were being transported in boats for the purposes of war.

That practise, as depicted in this section from the Bayeux Tapestry, which shows horses being unloaded during William the Conqueror’s invasion of England in 1066, was adopted by Europeans as early at the 10th Century. William, it’s worth noting, brought more than 2,000 horses with him across the Channel. By row boat.

If shipping horses by oar-powered boats sounds like a terrible, terrible idea, it was even worse in practice. The animals were usually slung in slings on deck, or tethered tightly and boxed into compartments in the hold, which, unsurprisingly, often resulted in death.

Also, there were no loading ramps for horses at the time, so getting them on and off the ship presented its own special peril. Many were simply thrown overboard upon arrival.

Despite the dubious logic of that system, it’d be seven centuries before General William Carter, of the US Army Veterinary Corps, came out with research suggesting that restraints such as slings were not, in fact, suitable for horses. Let’s hope someone gave that man a medal.

Come the 18th Century, horse “vanning” was introduced as an effective means of shipping horses long distances by land. Vanning involved horses hauling other horses as cargo. Unnatural? Sure. Slow? You bet. But effective? Indeed!

The first incidence of vanning dates back to 1771 when an adapted horse-drawn van was created to spare the bad feet of famed British racehorse Eclipse from the long journey to the stud farm where he would begin his new vocation. Thus, ended one historic career and began the official history of the “horse trailer.”

The practice didn’t become common, however, until the 1830s.

Once again, it was the fortunes of men that inspired the shift. In 1836, trainer John Doe convinced the owner of a racehorse called Elis to drive his steed in a horse-drawn wagon to Doncaster racetrack in England, which was a fair distance from his stable. Elis won the race at such high odds that British trainers all over soon adopted the practice.

Then the trains came…

With the rapid expansion of the railways in the 20th Century, train travel became a viable option for shipping horses quickly over long distances. There was just one problem: horses don’t actually enjoy being enclosed in dark, rattling boxes.

J Wortley Axe, a former president of the Royal College of Veterinary Surgeons, wrote in 1905 that the loud conditions on board the train and short tethers used to restrain the animals seemed intentionally designed to spook horses.

It was at this time that trade in leg wraps, shipping blankets, head bumpers and other protective gear began, a practice widely used today.

Which brings us to the advent of the modern horse trailer

Trailer models have evolved over the past 70 odd years from open boxes on wheels to the comparative comfort of roomy box stalls and air ride suspension. So next time your horse gripes about his ride, you can assure him that he has it far better off than his ill-fated predecessors.

Or, you know,  just give him a carrot.

Be Social! Connect with Equo: