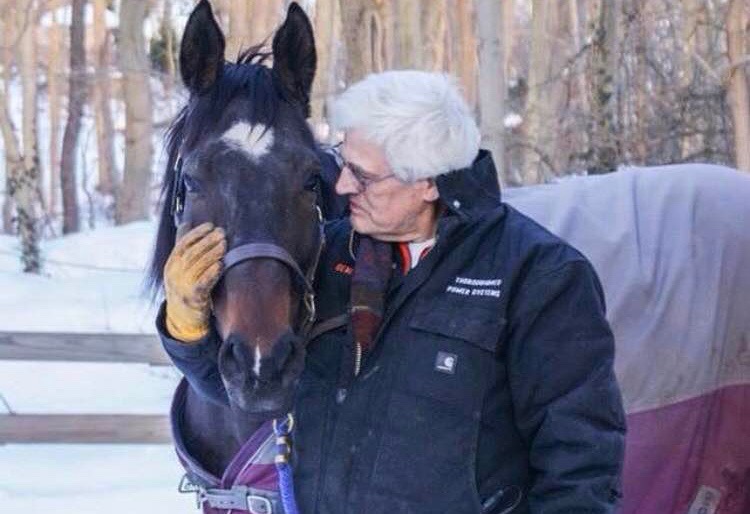 Before the morning of July 28, 2001, I had never before awakened to the scene that was playing out although I had been seeing it over and over in my head for some time: there was a horse outside my window.

From my second floor vantage point, I could see Buddy, the first equine inhabitant of our brand new barn, and the broad white blaze on his chestnut face stood out even in the pre-dawn twilight.

I had ridden my first horse only three years earlier at age 48. It took only a few months to realize that I not only wanted my own horse, but wanted to live with horses as well. Within a year, we had put things in motion, which led to the sale of our comfortable little house in a beachfront community and the purchase of a very old house on undeveloped horse property. Before another year had passed, Buddy was staring up at the house from his stall and I felt I was living a dream.

My daughter, Samantha, was ten years old when Buddy arrived, and within two months we acquired Magic, a been-there-done-that older mare as Sam’s first horse.

Those first two years were a fun filled, horsey dream. We had parties at the house where kids would take turns riding the good natured Buddy and Magic and adults would sit on the deck overlooking them and talk about horses. Even before our competitive careers took hold, we would haul out for lessons and trail rides and dress the horses in costume for Halloween and Fourth of July; these were the days of pure fun with horses. 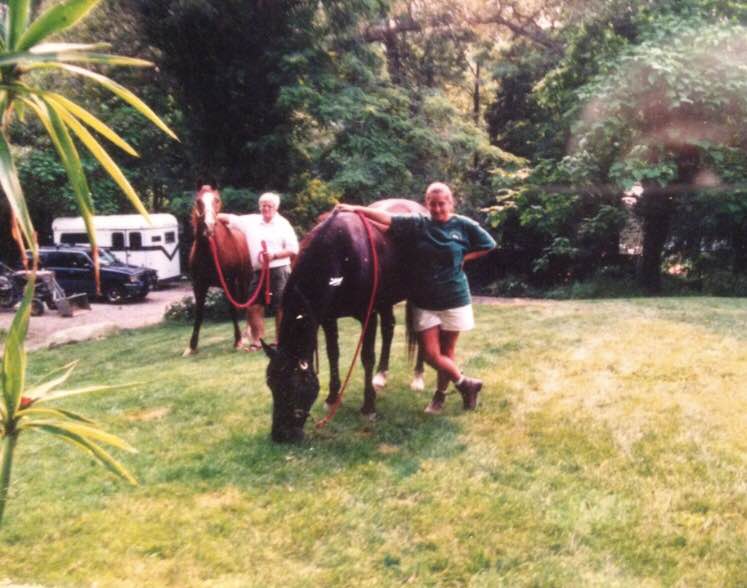 Fun filled days of early horsekeeping: Buddy with the author and Magic with a young Samantha.

One evening while we were attending a school function for Samantha, I received a phone call from our boarder: Buddy was down in the paddock and couldn’t walk. I left the school immediately and called the vet to meet me at home, a 30-minute drive away. He gave Buddy some medicine that at least let him get up and walk to his stall, and I remember spending the balmy late summer evening in the bedding with him.

I had cared for other animals before, but with small animals my care consisted of being observant and willing to bring them in to the vet practice when warranted, and following simple instructions. I had taken for granted the fact that any intense nursing care for small animals was done at the veterinary practice. Due to nothing other than ignorance I had never considered my ability to provide a high level of care to a horse.

I accepted the responsibility, but at that point in time I wasn’t clear as to what that responsibility might entail. In a word… unprepared.

In my day job, I’m considered to be a master tradesman. It had been a long time since I was an apprentice but I was lucky enough to have a veterinarian who treated me like one and when I was able to demonstrate proficiency in a one procedure, he would give me more and more responsibility. In anything other than the most urgent of circumstances he was content to let me find my way by following his instructions and, in so doing, inspired a confidence in me to pursue a new set of skills that I never even knew I would need or want.

The days that followed that first incident with Buddy were a mind-spinning blur filled with medications to control his pain and tests to pinpoint its source, eventually found to be a severe case of Lyme disease, then considered a rarity.

I was instructed on how to prepare and administer scores of crushed antibiotic pills multiple times every day for months. In follow-up tests during that time, Buddy was also diagnosed with Cushing’s disease and it was thought that the anti-inflammatory effect of large doses of antibiotics had also masked the beginnings of founder.

The level of care needed intensified.

Further test results indicated an abnormality in Buddy’s liver enzymes and we had to take him a large vet school for a needle biopsy of his liver. The diagnosis was not good, and the trailer ride home was a long and sad trip.

At home, we consulted with our local vet and agreed that we would keep him comfortable until we no longer could. We didn’t focus on the six months that the university vets gave Buddy to live; we focused just on the next 24 hours. And so, this suddenly anointed caregiver learned to live in the day, and not in the future or the past.

It was life changing for me and, as it turned out, for Buddy as well. He lived and thrived for seven more years, no longer ridden but finding a new purpose in mentoring a pair of young horses we had acquired. Buddy died in his sleep at age 33. 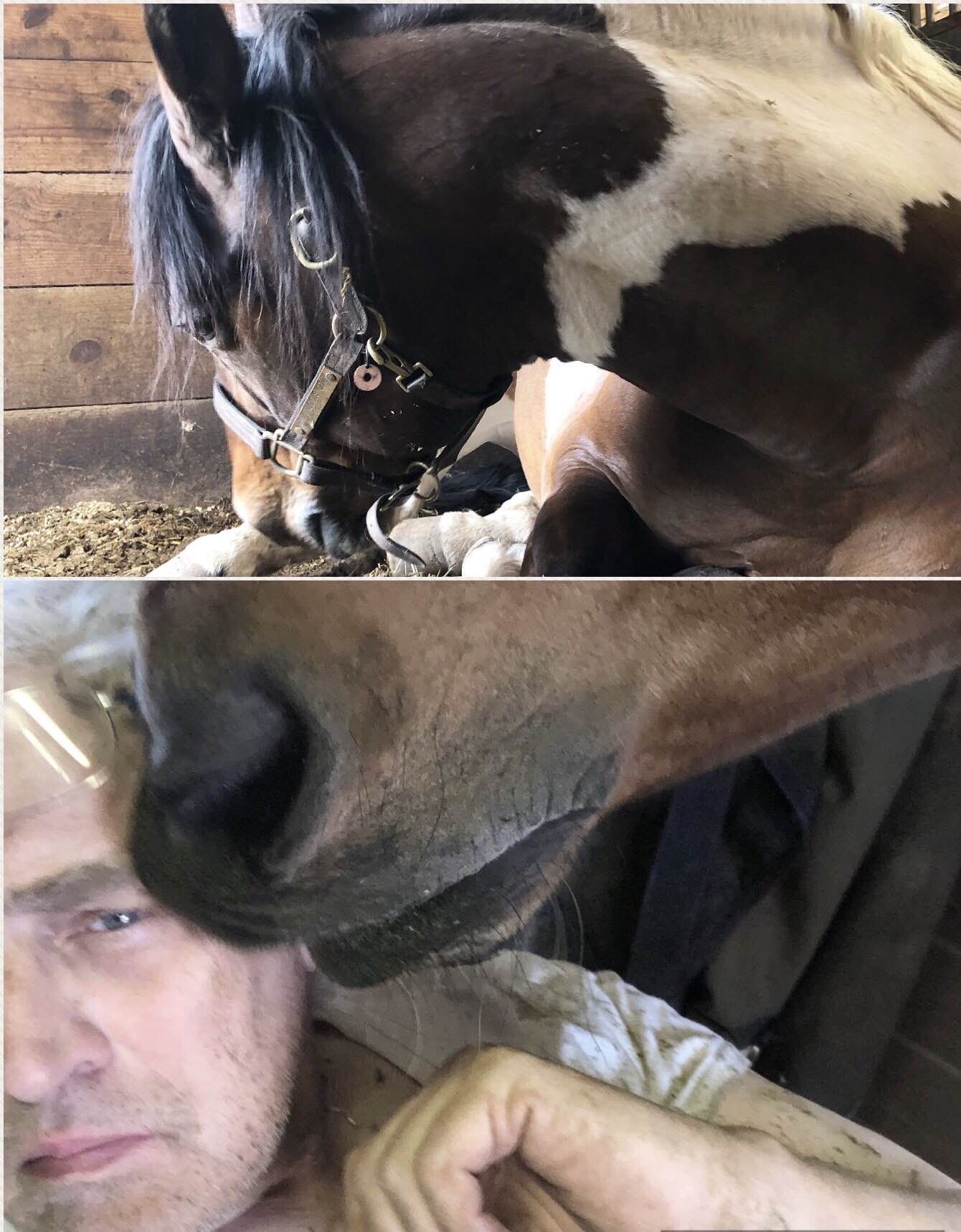 DannyBoy had a bellyache and was appreciative when the author helped alleviate the symptoms. Perhaps a bit over-appreciative?

Since Buddy, I have been blessed by facing perhaps more than my share of challenges with soundness and medical problems in horses that have crossed my path. I guess I’m a little amazed that I have come to think of it as being blessed rather than cursed because the “me” that existed before horses was not quite so accepting.

When a human is hurt, injured or ill, I have always been the type to call for help, seek out anyone more skilled than me to take charge, and to provide whatever backup assistance I could.

Unlike my RN wife Mary, I avoided involvement in any hands-on care… but with horses, my reaction has been quite the opposite. I find myself always ready to jump in and do whatever I can for as long as I can. I moved from a “why me?” mindset to one of “why not me?” confident in my abilities and having faith in the universe for sending these animals where they needed to be. 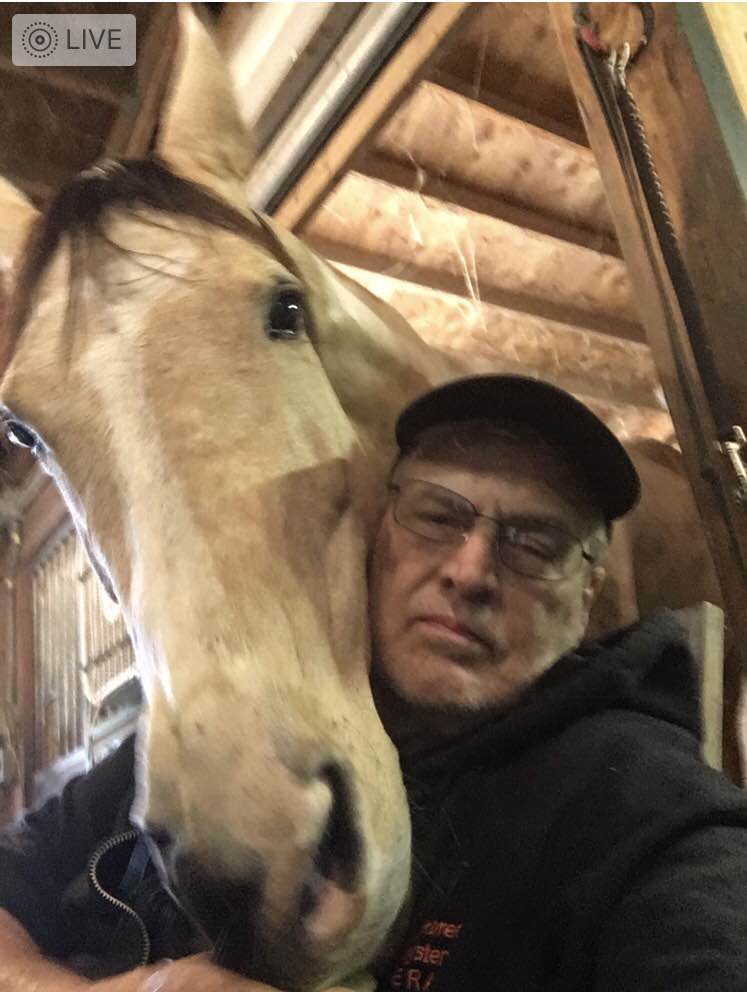 Bella back to her old self after a bout with laminitis.

In the seemingly strange but perhaps predestined path of my life, a passion for horses revealed another passion as a caregiver that I had no idea existed within me. I no longer question why horses requiring extra care seem to land in my barn; I find that I’m grateful that I have been given the wherewithal to provide it. Being of service to horses has freed me from the bondage of self, and has made me a better parent, grandparent, boss and human.

That’s a lot more than I had bargained for when I signed up for that first riding lesson 20 years ago. Yes, I loved it when I was handed my first ribbon in competition and remember it well. I love hearing that first nicker, after months of silence from a horse I was able to be of some assistance to, more.

Who knew that so many of the life lessons I had yet to learn at middle age, would be taught to me by a horse?