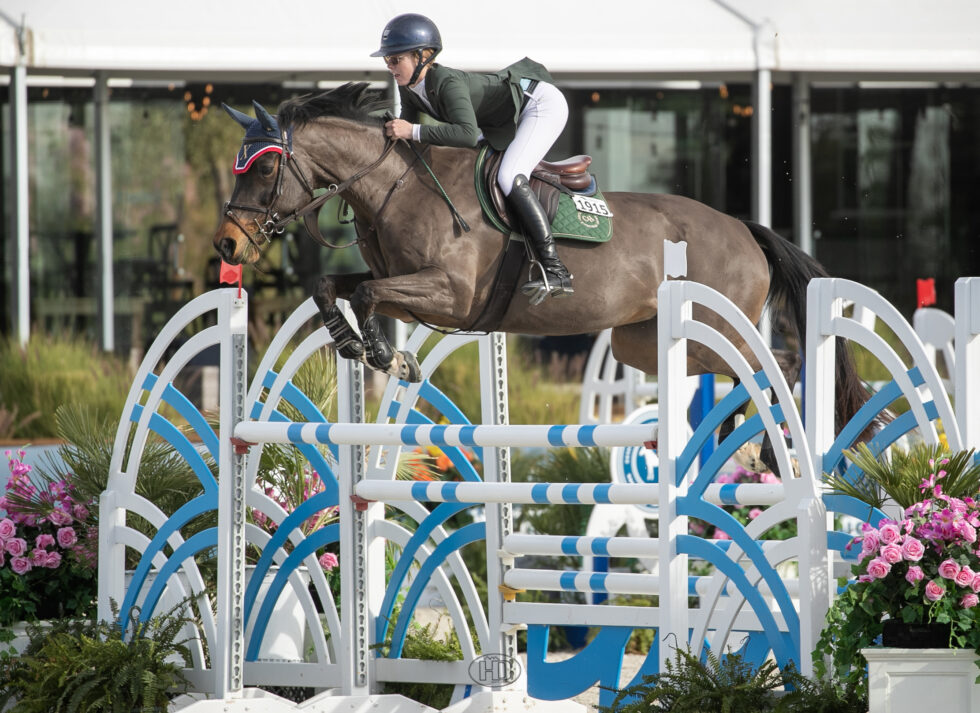 It’s been a triumphant return to the show ring, to say the least, for 18-year-old, newly minted professional, Skylar Wireman (USA).

On Sunday, Wireman and De Laloma took home the $30,000 Marshall & Sterling 1.40m Open Classic at the Desert International Horse Park (DIHP) after a brief hiatus from the circuit during the DIHP Fall season. And she clearly hasn’t wasted any time getting back in the swing of things.

The win came one day after her victory with Coolio 23 in Saturday’s Valencia Saddlery National Grand Prix. On Sunday, Wireman doubled down, stopping the clock at 29.931 seconds, just (and we mean just) edging-out Della White (USA) and Giggs on 29.995 seconds; Kaitlin Campbell and Laremo took third (30.536).

“I haven’t actually shown her that much,” Wireman said of the 15-year-old KWPN mare, De Laloma. “She’s generally better in a smaller ring, so in the bigger ring, she gets going a little bit. [She can also] get going in the jump-off, so I try and do more turning than galloping.

“She is naturally very careful, and naturally fast across the ground, so I don’t have to worry too much about going fast as much as how I can be efficient with the track.”

As an award-winning equitation rider in her junior days—not to mention the 2022 USEF Junior Equestrian of the Year—Wireman knows a thing or two about following the track. Last February, she and Heritage Farm’s Charisma made headlines when they won the World Equestrian Center—Ocala (Florida) Premier Equitation Cup Championship. Back in 2020, Wireman took home the [Platinum Performance/USEF] Talent Search Finals—West aboard Hot Pants.

But the Bonsall, California-based rider—who has said she likes to fully enjoy her time with her horses rather than letting nerves get to her—keeps a similarly light mentality when it comes to structuring their training.

“We do a lot of flatwork, with lots of lateral work, just getting them very broke [on] the flat. That way, when you need to turn, and go fast, and have the brakes, it’s all there for the jump-off,” she explained, adding that she believes it’s important to save her horses’ jumps for the show ring.

“They all go in the turnout and just hang out—they have a low-key, easy life at home,” Wireman says of her management mentality, which, by all accounts, seems to be working.

“They just get to the shows and they’re ready to perform.”