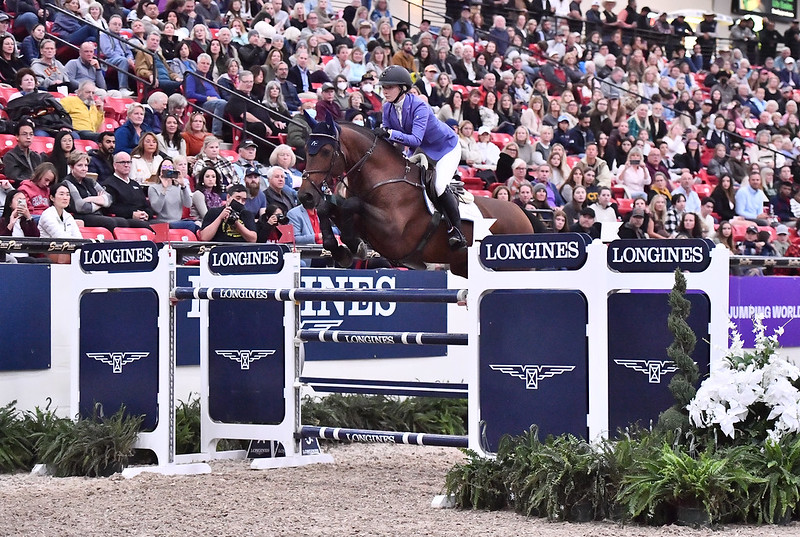 “You have to ride the wave because it never lasts in this sport,” said Lillie Keenan (USA) after catching yet another career first on Saturday night in Las Vegas.

A world class rider, Keenan is familiar with the fleeting nature of success in show jumping. But after a challenging summer the tides have undeniably turned in her favor, and she’s committed to holding onto her moment for as long as it takes to propel her career to the next level.

On Saturday, Keenan was last to go in the CSI4*-W $150,000 Longines FEI Jumping World Cup™ Las Vegas with 11-year-old stallion Agana van het Gerendal Z, coming out on top of the six horse jump-off. The win marked her first World Cup qualifier victory and the beginning of her Final campaign, where the courses are only getting more challenging as the weeks lead into Omaha. Just ask course designer Anderson Lima (BRA), whose plan was always to dramatically slim the 27-horse field.

“My idea was between four and six [clear]. I think the beginning of the class was a little harder for some riders, but as the class moved on, some of them just stuck to plan and got it figured out. I’m really happy with the result,” said Lima.

Keenan was one of the riders who managed to stick to her original plan and not allow the course or her fellow competitors rattle her nerves. She knew the level of the challenge ahead of her, but felt well prepared. Her first speed class win in the opening CSI 4* Las Vegas National “All In” Speed Classic set her up with the advantageous position of last to go in the order, and an added dose of confidence.

“It was quite delicate. When I walked it, I thought there were a few jumps that were big enough, and that’s exactly how it should be. It’s a World Cup qualifier, and it was built exactly to the standard,” said Keenan.

“Anderson’s one of the best course designers in the world, and that was reflected in the field today. You saw enough clear rounds, not too many; you saw faults all over the arena, and it was really about riding correctly and having your horse be there for you. I think that we had a jump off that was really appropriate for the field.”

The field included quite a few prospective winners, but her main adversary was Daniel Coyle (IRL), who logged the most recent victory along the World Cup Qualifier tour with 14-year-old mare Legacy in Washington. This time, he was in the irons of 9-year-old Ivory, who has less experience but is arguably just as quick. Keenan never underestimated Coyle, but she also didn’t let his blistering round change her plan.

“I’ve taught myself when I go later [in the start order] to just walk my course, think about my plan and stick to it. I know Daniel’s really fast. I didn’t need to see him do it to know that I’d have to do everything I could to try to beat him,” explained Keenan.

She shaved off just enough time, crossing the timers in 36.31 seconds ahead of Coyle’s 36.47 seconds. Rounding out the podium was 18-year-old Elisa Broz and 12-year-old mare Kardenta van’t Meerhof.

“On the approach to [fence] one, I can trust my horse so much to go on a slice. For him, he’s so competitive in every kind of class.”

Agana van het Gerendal Z is only getting more competitive as their partnership develops. Keenan took over the ride from Jil Verheij (NED) in 2017 when the stallion was still jumping 1.30-1.35m. Now, charting 15 rounds at 1.60m, Agana sports a 40% top ten finish rate and 33% clear round rate according to JUMPRApp.

Saturday’s win means Keenan’s agenda is booked for the near future as she makes a bid for the World Cup Final in Omaha.

“My idea was, if I was top three here, I would go on to Fort Worth (USA). Obviously, that turned out to be the case, so I will be changing my plans now to do that. It’s just about making the best plan for each of the horses and giving them their moments to shine,” said Keenan.

It’s the first major championship she’s zeroed in on since the FEI ECCO Jumping World Championships in Herning, Denmark this past August, where she wasn’t quite able to secure the results she wanted. However, her time on a Major League Show Jumping (MLSJ) team, the Trailblazers, has brought her to the next level.

“I spent the summer in Europe, and the first half of this year was solely based on the goal of going to Herning [for the World Championships]. I didn’t perform to the level that I had hoped and I had planned. After that I felt like, ‘Okay, I need to regroup’,” said Keenan.

“I got an opportunity to jump on a Major League team. I wanted to come home and try something different. So, I went first to Mexico, and I won my first CSI5* Grand Prix. It kind of just started rolling from there. I have some younger horses that had some pretty unbelievable results. And as they say, when you’re going good, you’re going good.”

Three World Cup qualifiers are still to be seen, which means there are three more opportunities for Keenan to secure her place in Omaha.