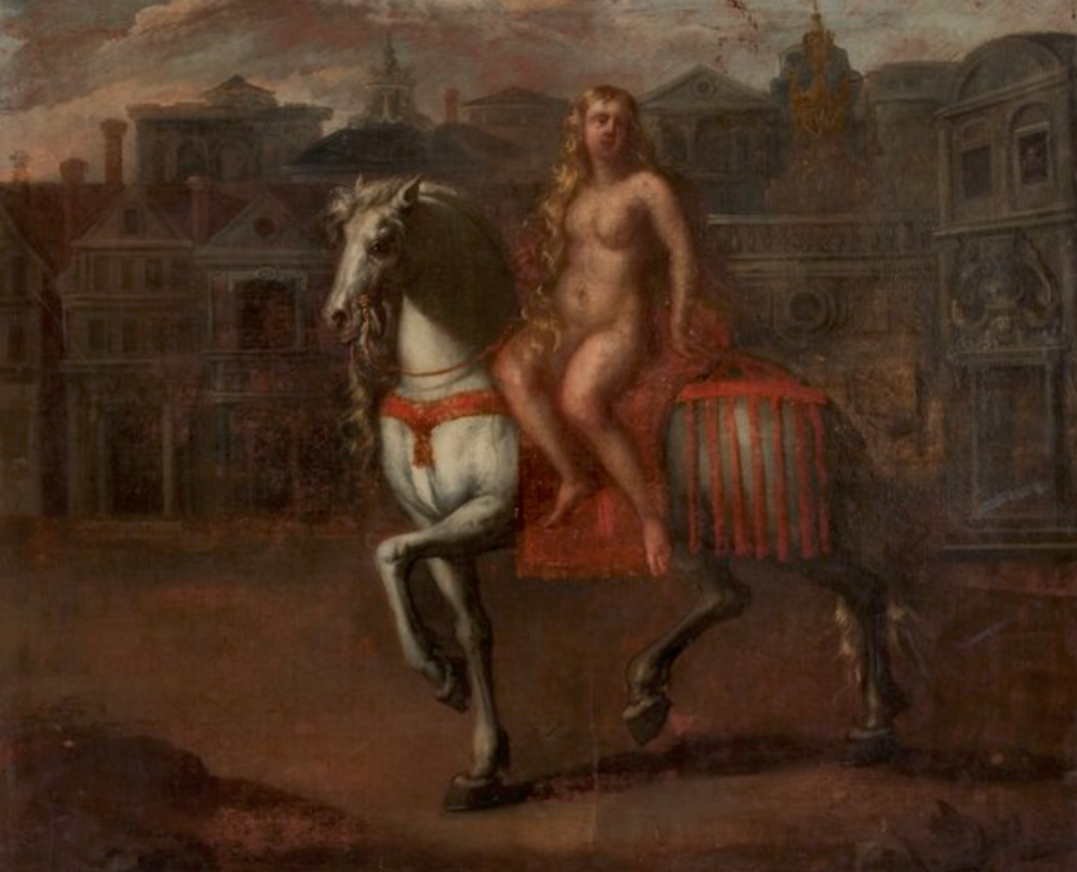 For as long as I can remember I have known the line, “Lady Godiva is a freedom rider.”

I say it from time to time, but for the life of me, right now, I can’t think of one occasion where that might be an acceptable thing to say.

The line is from a song called And Then There’s Maude, which was the theme song for the 1970s TV show Maude, written by Alan and Marilyn Bergman. I don’t recall watching the show, but I think it’s almost safe to say that I’ve known that line my entire life since I was born in the 70s.

I got thinking about Lady Godiva the other day, as you do, and since I’m continually searching for topics, I thought why not write about a naked lady and her horse? There must be a story in there somewhere.

And indeed, there is.

Lady Godiva a.k.a. Godgifu, was a real person way back in the 11-century, and a good one at that. She didn’t make it a habit of riding around town naked as a jaybird. That was a one-off and a legend.

Godiva and her husband, who went by the handsome name of Leofric, and who was also the Earl of Mercia and a powerful nobleman, donated to religious establishments on the regular, as they say. They even founded a monastery at Coventry.

The story of Lady Godiva’s ride ‘in the altogether’ first appeared in the Chronicle of Roger of Wendover, who was a monk in 1237, which was a hundred years or so after her death.

The legend goes that Lady Godiva was annoyed at Leofric for heavily taxing the townspeople of Coventry and as a woman of conviction, asked her husband repeatedly to reduce the crippling tolls placed on the poor. In what I can only assume was a bit of a tantrum, Leofric said and I’m paraphrasing here, “The day you ride through town naked, is the day I reduce taxes.”

Lady Godiva saddled her horse and set about riding through town with nothing more than her hair to cover up the necessary bits.

True to his word, Leofric, whose name I can’t say enough, reduced the taxes except for those on horses. Needless to say, I’ve researched these horse tolls and have come up empty-handed.

Now, before Lady Godiva went on her legendary ride, she requested the townsfolk to remain indoors, if they’d be so kind, so she could retain her dignity. Everyone did so except one man who just had to look. I suspect his name was Tom because due to his nosiness the expression “Peeping Tom” came about. Tom, or whatever his name was, was struck blind due to his curiosity.

The “Peeping Tom” anecdote was added to the legend several centuries later, which seems odd, but also interesting.

And that is why Lady Godiva rode her horse naked. Mystery well and truly solved.

Legend or otherwise, Lady Godiva was a woman before her time, and it took the aid of a horse (as usual) to help the poor people of Coventry.

Mentioning the name Godiva 11 times in this article got me thinking about the chocolate of the same name. Of all the names in the world, why choose that one? I’ll tell you why. In 1926 Pierre Draps started making chocolates in his Brussels confectionary in an attempt to impress his wife.

She was suitably dazzled and a name for the chocolates was needed.

The family found inspiration in the legend of Lady Godiva as she embodies such traits as boldness, generosity and a pioneering spirit which are values the chocolate company still hold today.

There you go, Lady Godiva in life, in legend and in chocolate.