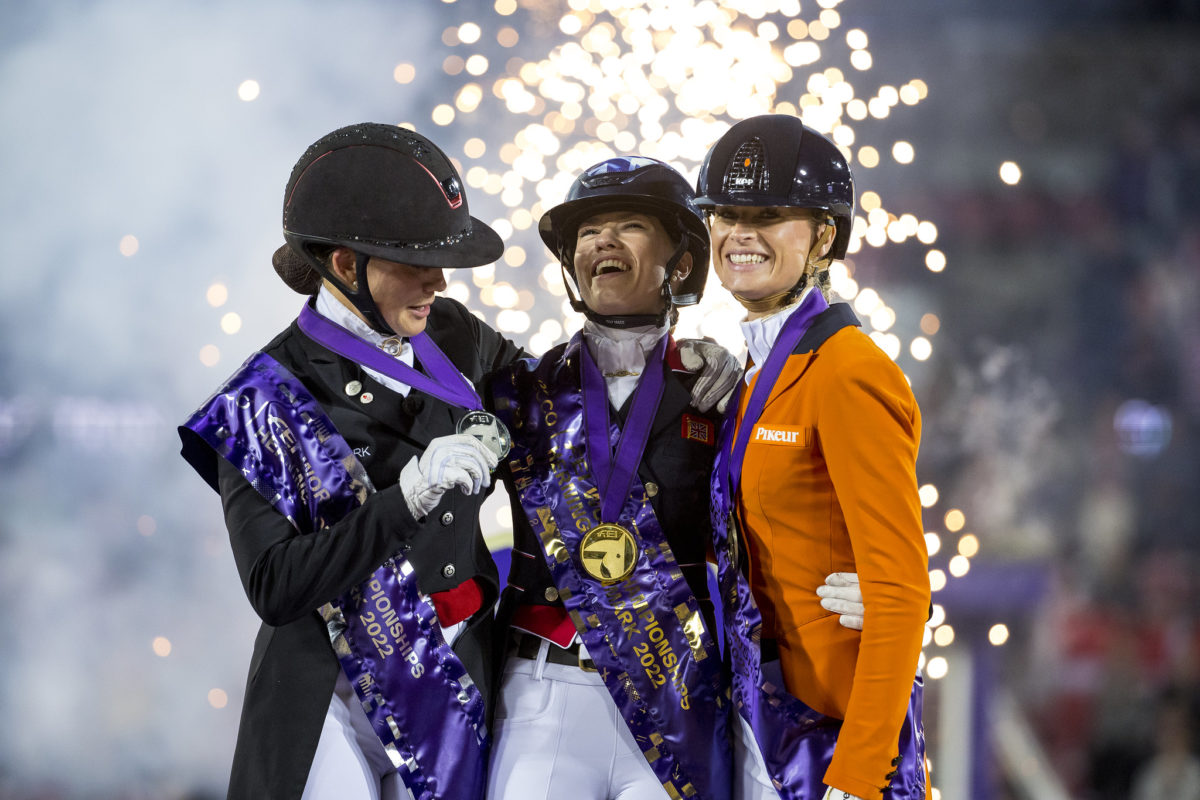 “As soon as the music started it was the most insane feeling. [Glamourdale] was dancing to his Freestyle and I just felt I could sit there and enjoy it,” said Great Britain’s Charlotte “Lottie” Fry.

Still riding on cloud nine from their gold medal finish in Monday’s Individual Grand Prix Special, the pair claimed a second victory on Wednesday in the Blue Hors FEI Dressage Freestyle World Championship in Herning, Denmark. They were the single combination able to break into the 90s, tallying a monumental score of 90.654%.

With a standing ovation of 10,000 spectators strong, the 11-year-old stallion blossomed into a superstar this week in the Stutteri Ask Stadium. For Fry and her team, who were moved to tears in the kiss n’cry, it felt like nothing less than Glamourdale’s destiny fulfilled.

“The second you entered the crowd was going crazy before you even started, and that already was exciting for Glamourdale to go in there and he knew that it was full and he needed to show off.”

And show off he did. Paying tribute to Freddie Mercury, it was power from the first stride as they passaged down the centerline to Queen’s energetic “Another One Bites the Dust.” The music then evolved and they settled into their program, but there was never a dull moment.

Anticipation built as the pair seemed to effortlessly rack up 8s, 9s and 10s leading up to their now iconic extended canter pass. They swept six 10s and one 9.5 to achieve a near perfect score.

“I was listening to the crowd singing along and getting excited about his extended canter. Honestly it was the best feeling in the world and I never have been in an arena like that or ridden a test like that before,” said Fry.

The musical freestyle wasn’t reserved to the composition emitted from the speakers, the crowd was integrated too, inspired to join the chorus by the blend of popular songs.

“Everything with Glamourdale is nothing short of amazing. He has had this music at stallion shows growing up, so he always dances to it. When the crowd joined in and sang tonight he just loved every minute of it,” said Fry.

The podium was an exact copy of the Grand Prix Special

“I was super happy with my horse, he was hot today but with that said he’s ten years old. It’s my third horse within four years to take an individual medal and I’m very proud of him and my team,” said Laudrup-Dufour.

Laudrup-Dufour’s Vamos Amigos has a fiery streak, but the gelding has matured this Championship outing. On Sunday, the pair helped Denmark clinch the Blue Hors FEI World Dressage Team Championship Grand Prix. Double silver is further evidence Vamos Amigos is coming into his own.

“You always go for gold but it’s an honor to be here with these two girls and I do really think that we are a part of changing the sport of dressage and it makes me so proud.”

As for Hermes, he had plans to stir the audience and exit the ring with his favorite sound, a boisterous applause. While the first two days of competition he was initially sharp to the atmosphere, on Wednesday he was all business.

“On Saturday and on Monday he was a little bit tense and I thought today with all the audience he would be more tense but he was actually so relaxed. He’s just getting better and better so I was extremely proud that he did such a good job and I had all his focus,” said Van Liere.

As the British say, even the judges were ‘chuffed’ to evaluate the pool of talent at Herning.

“It’s amazing to sit there giving marks for such good riding and floor-plans and music, and it’s the small details that decide the placings and we saw extraordinary quality. Out of 15 combinations 13 were plus 80% scores,” said the Judge at C, Susanne Baarup (DEN).

According to Baarup, the high score average is an indicator that the sport of dressage is evolving in the right direction. While it hasn’t always been common to see exceptional youngsters sustain their career to the Grand Prix level, many of the horses competing in Herning were familiar faces.

“A lot of people say we don’t see a lot horses from the [Young Horse] World Championships doing Grand Prix. But here in this field of nice horses there have been a lot who had success as young horses. It shows the basic riding was done in the correct way,” said Baarup.

Fierce competitors, but stronger together.

Fry, Laudrup-Dufour and Van Liere might compete under different flags, but together they’re making some notable fundamental and stylistic impressions on the sport.

“I think style-wise all three of us, we are light riders and we want to try to shape the horses in the softest way possible. It is tricky with such powerhouses, all of our three boys are super powerful and it takes a lot to control it but I think it’s impressive. The way both Lottie [Fry] and Dinja [van Liere] ride, it’s so light and you can’t see that they are doing anything,” said Laudrup-Dufour.

“As Susanne [Baarup] said, to see the young horses coming through the system is great. They start to get older now and they can show how much the breeding meant over the last few years. You can tell that these horses are born to do this and it makes it so much more fun for us riders. You don’t have to tell them what to do, you can just go along with them,” said Laudrup-Dufour.

If you’re a World Championship rider it might be simple to just go along with them, but as for the rest of us, we’re just happy to watch the magic happen ringside.