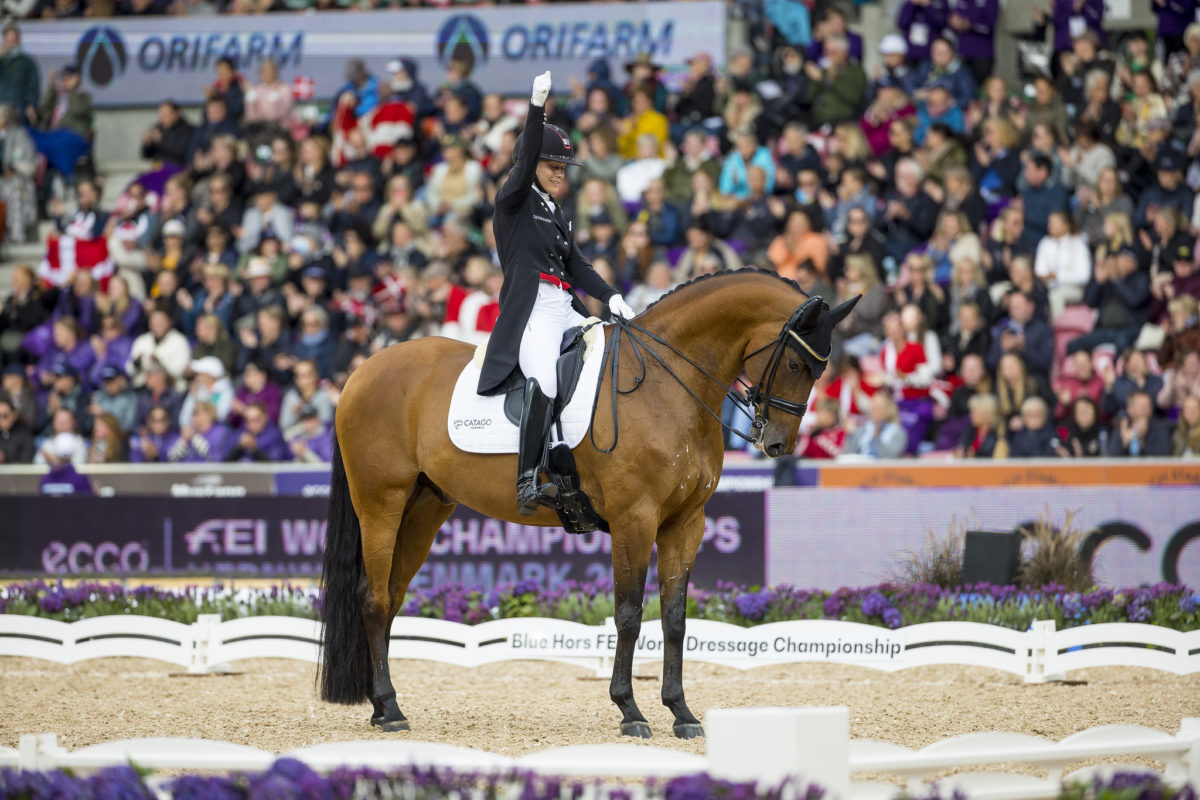 The Danish got their just-desserts on Sunday in the Blue Hors FEI World Dressage Team Championship Grand Prix in Herning, Denmark.

Nanna Merrald Rasmussen, Carina Cassøe Krüth, Daniel Bachmann Anderson and Catherine Laudrup-Dufor collected a team total of 235.41% and were hailed hometown heroes as they climbed atop the podium.

Great Britain followed on the wind of their swishing tails with a hard fought 234.223% team total. The defending champions, Germany, settled for bronze this go ’round the rectangle (230.791%).

In the sport of dressage, the fine line between genius and madness comes down to the slightest half-halts. A rider’s movements are so delicate they are elusive to the naked eye. While, by contrast, the horse demonstrates nearly metaphysical expression.

It is a balancing act that reigning world number two Laudrup-Dufor performs with expert precision. She earned the score to prove it, halting on a clean 81.864%.

“I managed to ride him [Vamos Amigos] to the limit but stay on the right side of chaotic and brilliant today,” said Laudrup-Dufour of her 10-year-old mount.

“He’s had a super season so far, he’s been riding a wave since Neumunster really. Leipzig was like riding on a bomb, but I think that atmosphere might have matured him too.’

So, Vamos Amigos might feel explosive on some ocassions, but surely that’s because he is the bomb.

Olympic gold medalist Charlotte Dujardin has no shortage of championship experience. Her horse, on the other hand, nine-year-old gelding Imhotep was getting his first feel for a championship atmosphere in Herning.

“He’s only done three Grand Prix competitions, he’s very inexperienced and I had no idea how he was going to be in there today. I was so proud of him, I had one little blip but it was just a miscommunication more than anything, I absolutely love that horse. He makes me smile from ear to ear every day. He has so much power, so much expression, he wants to work and to please you. Now he just needs to get used to the environment and to be given some time,” said Dujardin.

Dujardin has been riding Imhotep, who she affectionately calls “Pete,” since he was five years old. Riding for second place isn’t usually in the ultra competitive Brit’s plan, but her winning ways are rooted in her patience for developing horses.

“I haven’t done big shows with him but I know him well and have a really good partnership with him. It’s a fine line because he’s nine and I don’t want to overdo it, but I wanted to do enough to get enough points for the team today,” said Dujardin.

“I didn’t want to scare him and I felt I had a really nice ride, but I can’t tell you how big everything feels. In a year or two when he can manage all that power he’s going to be spectacular.”

“He’s a massive showman. He and I were in our own little bubble but when the crowd clapped on the last centreline he loved it, he lifted his head and he went ‘wow!'” said Fry.

Fry’s ride might have been what brought Great Britain so close to Denmark in the results, but it was the added push for Laudrup-Dufour. Upon hearing the crowd roaring for Glamourdale, she only became more focused.

“I’ve been dealing with [the pressure] since I did my first Championship when I was 11 years old and I’m fine with it, it just brings me closer into the zone,” said Laudrup-Dufour.

“I was shaking and so stressed when Catherine was riding. We saw Lottie [Fry] riding on our phone in the stables and saw she was amazing so we knew Catherine had to ride at her best to get the gold. To finally bring this medal home is amazing,” admitted Merrald Rasmussen.

Germans were given a run for their medals

The defending champions weren’t going to let the title slip from their gloves quietly. Seven time Olympic gold medalist Isabel Werth is far from disappointed, welcoming the vibrant insurgence of competition in Herning.

“We didn’t come here as favorites and we knew the Danish would ride for the gold. We were not quite sure about the British but Charlotte always delivers when she needs to,” said Werth.

“We are not disappointed at all and we knew when we came here with new riders and horses that it would be difficult. It was a great competition and we are all satisfied with our results.”

By the looks of it, legend Ingrid Klimke is in agreement.

All eyes on the Grand Prix Special

Action in the dressage ring continues Monday as the top 30 riders will return for the Individual Grand Prix Special. Stay tuned!