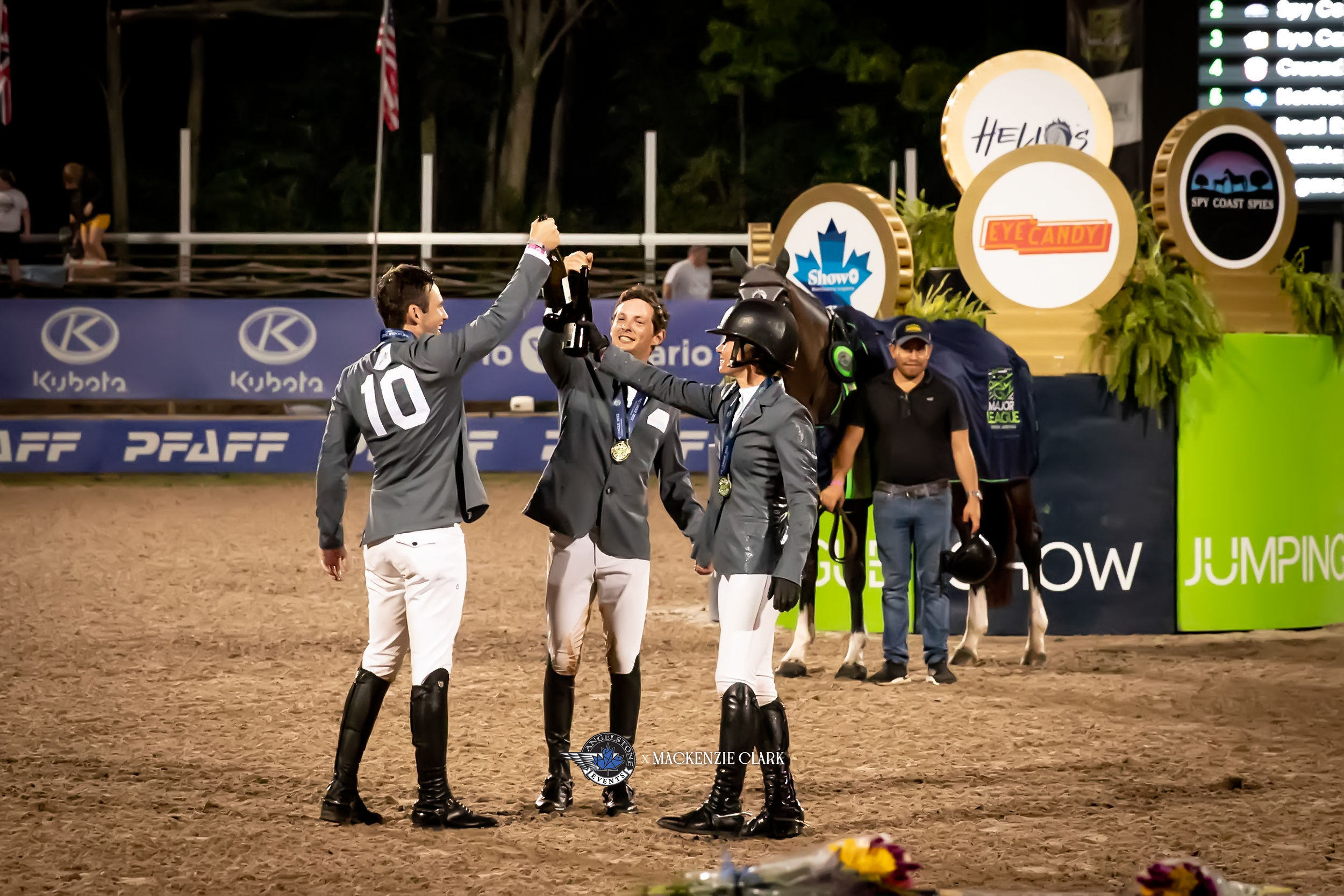 For the third leg in a row, Helios and Spy Coast Spies faced off in the gold medal match.

And for the third time in a row, Helios came out on top.

Eye Candy is riding for second

“Thank God Amy is back,” said Eye Candy manager Erica Hatfield before Friday’s team event. Fresh off the FEI World Championships in Herning, Millar made her first appearance for Eye Candy in 2022, helping put the team on the podium for the first time this season with a pair of clear rounds alongside Jacqueline Steffens and substitute rider Richie Moloney.

But with Helios taking the win for the third consecutive leg, the stats are against Eye Candy reclaiming their championship title. Hatfield took to Instagram the morning after to declare that the team is now riding for second, like the Shakespearean tragedy it is.

“O tedious morn, awakening to another win by Helios!” started the post. “And worse—according to my calculations, unless they start falling off their horses in all future rounds, they have the season championship locked up! They simply have created too great a gulf between them and us—us being all the other teams! How did this happen?”

You can read the full missive here (or jump straight to the conclusion):

“I’ve concluded that the REAL competition is the one for SECOND PLACE. This is the spot upon which all eyes will be trained, as Helios makes its tediously consistent winning run each week—who cares!…So, the mission now is to scrape our slow and ploddingly way past the Spies, who sit at Number 2 in the Team Rankings. By hook or by crook, we climb up past them and seat ourselves in the Place of Honor—the peak by which we can see Helios, the Sun God, shining brilliantly across the vast distance of space!”

Helios vs Spy Coast Spies, Round 3

Helios elected to bring in the first of two permitted rider subs for the season and tapped a horse rider combination that has MLSJ experience for the job: Sydney Shulman Desiderio and Classic Penny.

Shulman rode for A.I.M United in 2021, helping the team to a third place finish overall. Classic Penny was previously campaigned on the MLSJ tour by Lugano Diamond’s Erynn Ballard.

“I was super excited to join with Helios. Also, a little bit stressed considering they are two for two and I felt like I was coming in with a little bit of pressure on me for sure,” said Shulman Desiderio.

The pair didn’t disappoint. First in the ring (Helios drew first in the order), Shulman Desiderio and the 10-year-old Norwegian Warmblood mare started the night off with a clear and one of the fastest first round times of the day. Mark Bluman and Noortje vd Windheuvel followed suit, while a single rail from McCarthy put the team on 4 faults.

“Simon and Marky are great teammates, and are definitely fast riders; you can count on clear rounds with them,” said Shulman Desiderio. “My horse, Classic Penny, who’s super careful and naturally extremely fast, [was the perfect] kind of horse for this set up in the team event.

“I was super excited to be able to go fast and let it rip a little bit in the second round, and she was fantastic.”

Turns out, getting along with Classic Penny was, appropriately enough, a bit of a coin toss for Shulman Desiderio, who said she always liked the mare from afar but bought her from Ilan Ferder in 2022 without so much as a test ride.

“She’s super spicy [and] right up my alley, and we just really blend well together,” she said. “It’s quite hard to find horses these days, so you have to take a little bit of a chance sometimes.”

With two wins under their belt, Helios wasn’t feeling the pressure

“Honestly, when you have the group of riders that we have [and the] bond that we have as a team, there’s really no pressure. We’re basically just encouraging each other to do our best, and I think that’s why it’s worked out in every leg,” Bluman said, adding that this week’s performance was of a decidedly different caliber than MLSJ Traverse City before it.

“In the ring, the first two legs, we got a little bit lucky; this time, it was not [due to] luck—we owed this win to Sydney and Simon tonight.”

“We’ve an unbelievable team,” McCarthy echoed. “I think going into this, myself and Marky [Bluman] were a lot more confident than we were in [MLSJ] Traverse City, because we now have the win, and everybody on our team has felt that winning feeling. I think the pressure to perform for our team is a little bit less, because everybody now knows everyone on the team is [capable]. I know it definitely helped me today.”

Helios has made no secret of their strategy: Use your fastest two riders in the second round. But they’ve learned to apply it to their own order-of-go as well. Gotcha, McCarthy’s horse, is sensitive to atmosphere, something MSLJ Toronto brought in spades, so the team opted to let her jump last to give her ample time to cool her jets.

“Gotcha is an unbelievable mare. She tries so, so hard every single time, so she’s not very good at conserving her energy,” he explained. “I said that going into [MLSJ Traverse City] a couple of weeks ago, and we made the plan that we would try and give her as much time as possible in between the rounds.

“I just try to keep our moving and try to keep her away from anything that would hype [her] up or get her blood going,” McCarthy continued. “It’s normally only for the first five or 10 minutes [after a class] when she’s quite wild, and then she’s over it, and she’s a bit tired.

“It was unbelievable to get into the gold medal jump-off [in MLSJ Traverse City] but the win was kind of handed to us.” McCarthy continued. “So, for me personally, I’m just delighted that I was able to go in today and lay down the round that I did, and that the mare just responded incredibly well.”

Bluman is catching a vibe

Despite bouncing back from a little good-natured ribbing from one of his teammates over the Helios WhatsApp group chat, Bluman said he’s keeping his eye squarely on the prize—and his head in the game.

“The format is great, jumping for a team, with people from all different countries. Like, every person in the team is from a different country—there’s Irish, there’s Mexico, there’s Israel, the U.S., [and Colombia represented]. There’s a mix of everything,” he said.

“For me, this class is the most fun class I’ve ever jumped in my life.”

Next up: MLSJ heads to Ottowa August 25–28 then back to Traverse City for the American Gold Cup September 15-18.