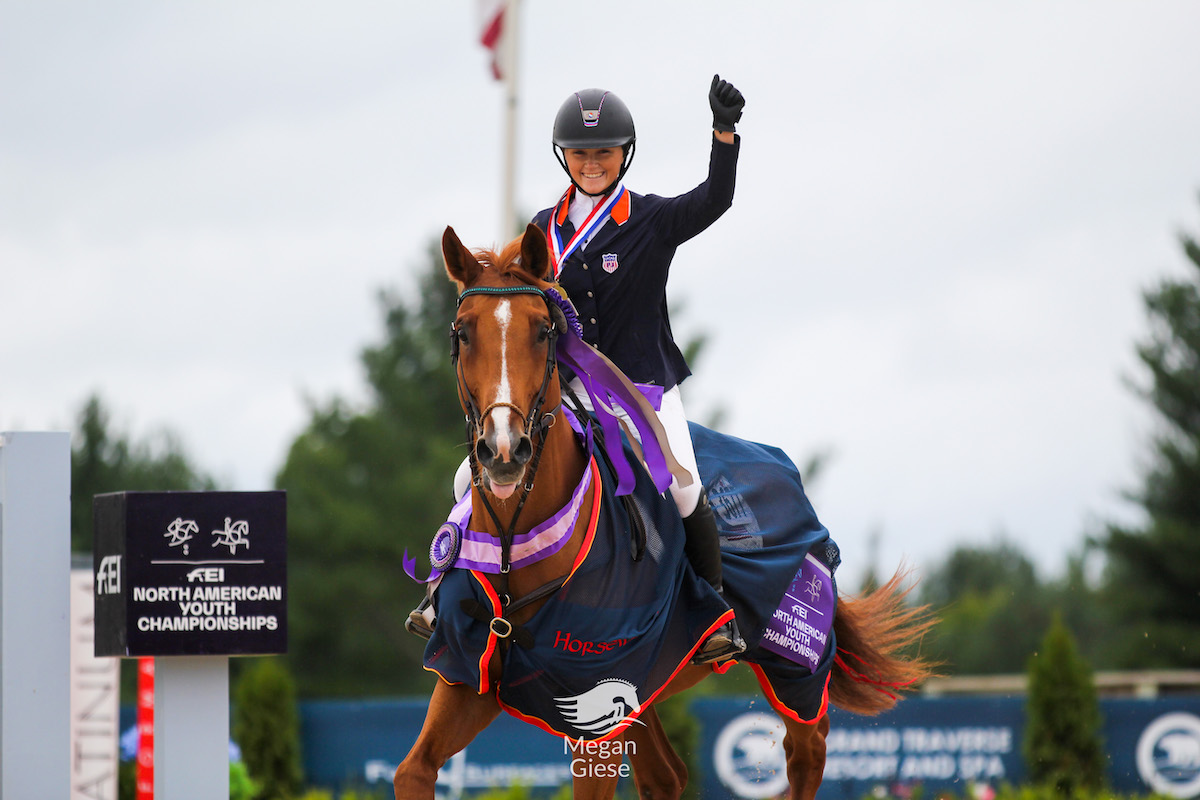 Four months ago, D’artagnan was living in a field.

The 14-year-old chestnut gelding, previously campaigned by Brazilian Olympian Santiago Lambre up to the 1.50m level, hasn’t shown internationally since 2018. For eight months, he was out of work entirely.

Then Lawson Whitaker gave him a job.

“We got him around April,” she shared. “He came from South Carolina, and he was not really doing anything out in the field, not being ridden.”

Connected by her trainer, Gaston Escamez at GE Sporthorses, the Dutch warmblood came to Whitaker’s farm on trial.

“I rode him and he was out of his mind for the first 10 minutes,” she laughed.

“At first I thought, oh god, I’m going to die. He’s going to throw me off. And then I clicked with him and I was like, okay, I got this, everything’s going to be fine.”

More than fine, by their record.

In just four months, the pair has moved up to 1.35m, not only qualifying for the pre-junior division at the North American Youth Championships in Traverse City, MI, but riding away with the individual gold. Whitaker and D’artagnan were the only pair to produce five clear rounds over three days of high pressure competition.

“He’s naturally fast. I think he was just made that way,” said Whitaker of her speedy partner. “His mind is like two steps ahead of his feet. So it took us a second to kind of figure out how to ride it. But afterwards it’s just click after click after click.”

You could say Whitaker is the ice to D’artagnan’s fire.

“I figured out just to be cold mentally, because if I was going the same speed as him, we were not going to do as great,” the Zone 4 rider explained.

But the fiery chestnut you see in the ring isn’t necessary what you get at home.

“I feel like if we got him on video at home, he would be sold as a hunter because he’s just so long and low when I’m flatting him at home. And then we take him to a show and he’s just like, I’m ready to go!“

Still, D’artanga gives her plenty of opportunity to practice keeping a cool head and staying on her toes.

“He has days where he just won’t calm down. And then there’s also days where you have to kick him to make him go forward. But I’ve never really had any issues of him calming down when he’s in the ring. It’s always more in the schooling ring because he sees all the horses jumping.”

That enthusiasm had some questioning her decision to bring D’artagnan to NAYC instead of her other mount, Finch Farm Clifford, a horse she competes in the high junior amateur division.