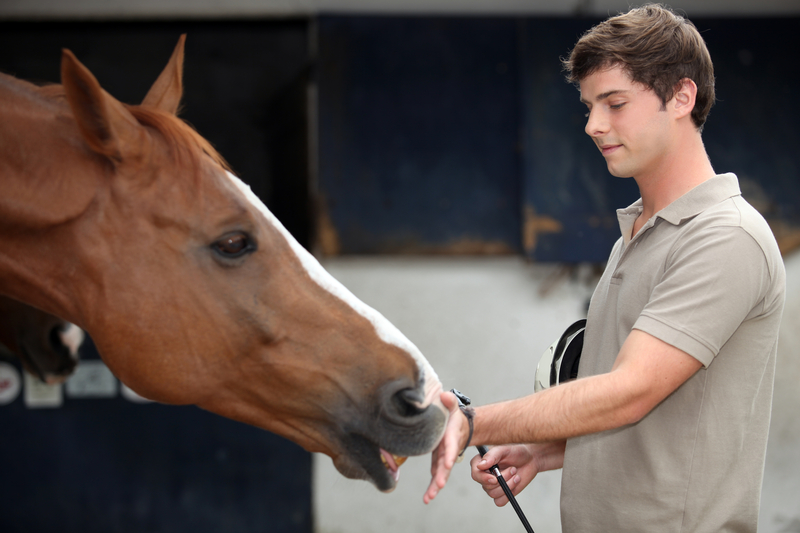 Let’s be real, horse show boyfriend is auditioning for the much more grueling role as horse show husband.

Before they have to pull your trailer, repair broken fences and drag the arena, they have the luxury of perusing around the horse show as an elevated spectator with a VIP stables pass. You imagine he might look around and be impressed at this horse world he never even heard of before he started dating you.

Okay, so we have to do some damage control. It’s not all doom and gloom—yet. We have some solutions for the boyfriend who doesn’t jump at the chance to watch you jump your horse.

Look, ladies. I know, “he’s great.” But opening up this article in the first place is a red flag, and not the little one that goes on the right side of the jump. A BIG one. You’re worried because you took him to his first show and he didn’t fall head over heels in love in the same fashion you did when your horse stopped at the liverpool.

Splash some water in your face. It’s time for a wake up call. Him huffing about with grumbling realizations that this is where you spend all your time and money is foreshadowing. If he doesn’t appreciate the horse show, he isn’t going to understand why you decided to miss another thrilling weekend of Netflix and chill a year from now.

If you keep him, be prepared for the years long tug-of-war between him and horses that awaits you.

Ha! Kidding. In the event you took my first piece of advice and said “thank you, next,” think before you date a fellow equestrian. While at first it might seem nice not to have to explain your lifestyle, instead you’ll have arguments about the training that caused the series of cringing chips on course that your non-horse boyfriend never would have noticed.

It’s also a very small world, and instead of having your friends say “Oh! Who is that cute, mysterious boy you brought with you?” they’ll have their own stories about the time they dated your boyfriend too. One is significantly more fun than the other, I can assure you.

Give him a job

Shoot, you’re still reading. Okay, so you don’t want to just go find another one. (With 3.5 billion men in the world, I would urge you to reconsider…). Cosmo might tell you to appeal to their masculine ego by making them feel useful. You absolutely couldn’t get through the day without them finding a water spicket and hobbling back with a brimming bucket, or surveying the ground to see if it’s too muddy to park the trailer.

To keep him engaged with the class, ask him to keep an eye on the leading jump-off time for your own course reference. He’ll be excited when he points out a new leader. Just don’t tell him you’re watching the live results on your Showgrounds app.

Don’t overcorrect him (at first)

Bouncing off my last point, nobody likes to be wrong all the time. Here’s the thing, a non-horse person will be wrong all the time. Your boyfriend especially seems to have a magnetic draw to the most infuriating phrases, and you’ll have the strong urge to mercilessly correct him. Here are some examples of how you can kindly redirect him while maintaining his intellectual integrity:

“Both of your brown horses looks the same,” he says.

“To you. Can you grab my special CHESTNUT shampoo from the trailer, please?” you reply.

“I told my friends I missed golf to watch your race today,” he says.

“Well it’s a good thing I didn’t forget my JUMPING saddle,” you reply.

Introduce him to the overpriced vendors

So, he’s spent hours ringside waiting for a hundred riders to jump the .85m before your class even begins, and you notice his bushy brows furrow in growing contempt. But let’s not make assumptions, any boredom complaints at this point might just poorly disguised hangry-ness. Think about American baseball, the slowest moving game in all of history with nine impossible innings. For some reason a hot dog, a beer and good company makes it a fun social event. The formula works, as does the theory of translation.

Find the most decadent crepe stand or deep fried assortment, then some equestrian labeled craft beer, and set him up in the stands with a tried and true horse show dad, or another horse show boyfriend. Misery loves company because it becomes less miserable. He might even be excited to come to the next show to see his new friends.

Tell your boyfriend that your horse loves him

This is my personal weapon, because it’s those big brown eyes that swooned us in the first place. I’m talking about my gelding’s, just to be clear. The most heartwarming thing is watching the person you love fall in love with your pet, but horses are more intimidating than dogs or cats and will take more time. So, arm your boyfriend with molasses muffins and show him how to expertly flatten his hand, and play up how sweet your horse is with him. Tell him your horse isn’t like this with anyone else (which will be true, because over the course of the weekend you’ll essentially turned him into a walking peppermint bag).

Once they have a special bond your boyfriend will look forward to seeing and spending time with your horse too. Maybe he’ll even do little favors for your horse every once in a while, like soft brush him or take him for grass. Think, the dad who said he didn’t want a dog but ultimately becomes the dog’s best friend. That’s the energy we’re striving for.

Equestrianism is often an acquired interest, which is sometimes easy to forget because all it took for us was one weekend at pony camp. The best thing you can do is give your bored boyfriend time to learn what is going on in the sand square at his own pace. If he is the right one he’ll make the effort, especially for you.

This article was inspired by The Jump Clear Daily Fantasy Podcast episode 15: The Solution For the Bored Horse Show Boyfriend? Listen to it here: