How I Survived the Mongol Derby: The World’s Longest, Toughest Horse Race 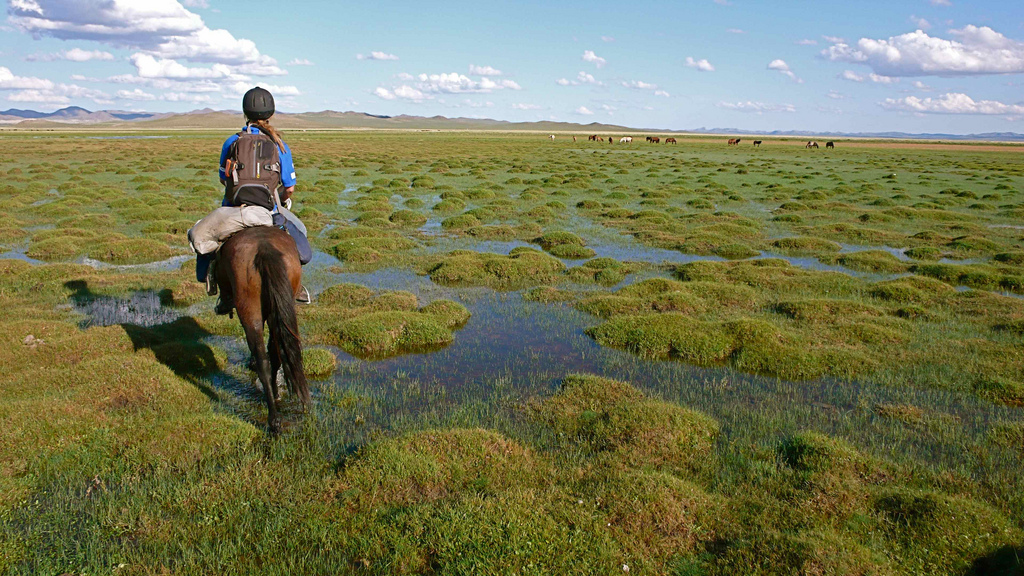 The young teen with a feathered mustache shuffled over to me, his eyes slightly down cast as he tried to shove the lead rope in my hands. Reflexively, I sighed and waved him off. I’d already ridden more than 60 miles today and it was only 3 p.m. My grasp on reality—and good manners—had vanished many kilometers before, left somewhere out on the wide open steppe.

Mongolia. August, 2015. The sun was an angry burning orb in an endless blue sky, no clouds in sight to offer even a wisp of respite from the heat. Sweat ran in small rivers down my back and chest, drenching my long sleeved shirt intended to protect my skin from the vicious UV rays. The only thought I had was seeking shade in the nearby ger, where I could sip water and try to settle the dizziness and nausea that had been plaguing me since the early morning.

As I made a move toward the tent for a second time, the kid tugged at my sleeve and I felt his calloused hand close on top of mine. He said something to me, insistently in Mongolian, and jerked his head toward the horse at the end of the rope. I eyed his animal, a 13hh stocky flea bitten grey with a forelock that hid his eyes. The gelding didn’t look like much, especially after I’d just made good time on a lovely lithe chestnut athlete that was a mini version of the Thoroughbreds back home, but the boy looked excited at the prospect of me riding his pony and all I wanted was five minutes of peace. I raised a shaky hand and pointed to my saddle that had been tossed in some goat turds and gave the boy the thumbs up. He grinned and got to tacking the horse that would carry me over the next 25 miles of inhospitable Mongolian wilderness. 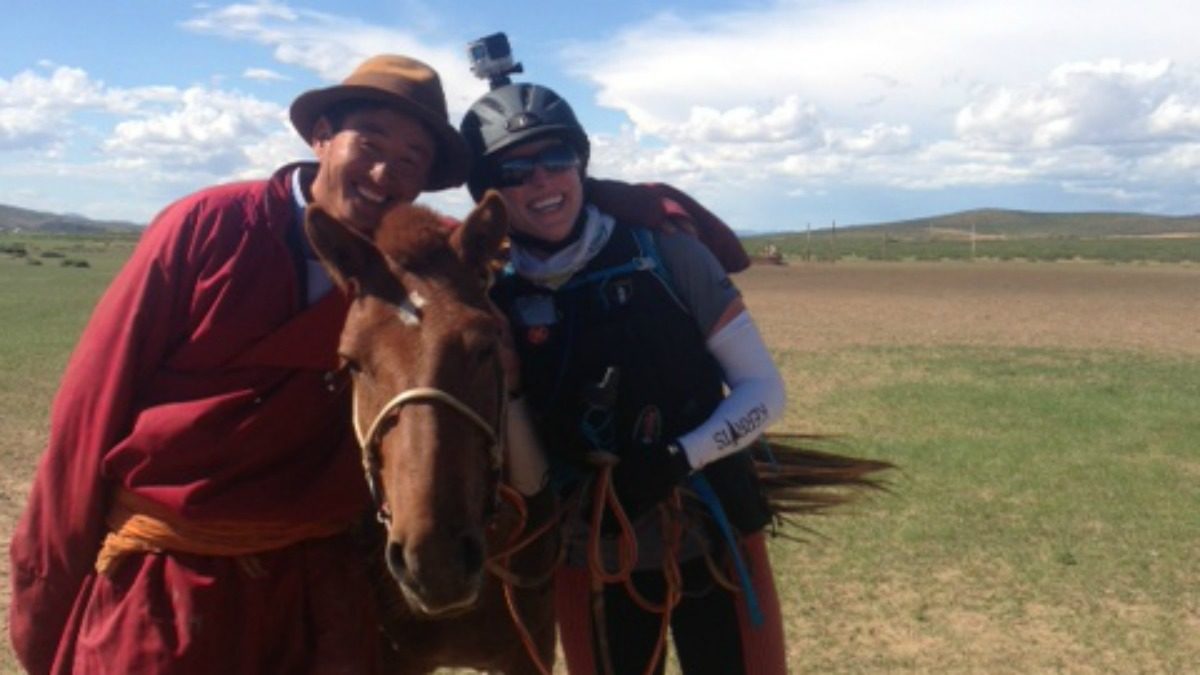 Celebrating completing the first 25 miles of the Mongol Derby. I had no idea what was to come.

Fifteen minutes later the boy and his father were working together, holding the grey’s head to prevent him from bolting while I tried to mount. In the span of a quarter of an hour, the animal I’d dismissed as a Thelwell pony had morphed into the Mongolian American Pharaoh. The herders knotted my reins in a tight loop and as I swung my leg over, they released the grey’s head and pointed vaguely in a northwestern direction. I had just a second to grab my reins before we were in a flat tack bolt across the marmot-hole riddled grasslands.

As the wind whipped my face and watery eyes blurred my vision, I glanced around for my riding companions—Irish jockey Paddy Woods and Swede Thomas Ellingsen. Paddy was right beside me, galloping on a little bay, yelling “just let him go!” as I battled the open-mouthed grey for control.

In the span of a quarter of an hour, the animal I’d dismissed as a Thelwell pony had morphed into the Mongolian American Pharaoh.

Thomas was on a bolter he couldn’t steer, galloping the opposite direction through a swampy wetland. I gritted my teeth in terror praying we wouldn’t hit a hole and cartwheel and Paddy cackled. “These horses are brilliant. Tough as nails I tell ya,” he whooped as we covered more than nine miles in just over 20 minutes. By that time Thomas had somehow steered his bolter in the same direction and we were all galloping together, three semi heat stroked maniacs headed towards horse station 14.

It was Day 4 of the Mongol Derby and as I finally relaxed aboard the grey and accepted I’d have to put my faith and fate in his surefooted hooves for the next hour and a half, I realized I still had no clue how to assess a Mongolian horse for speed or endurance. Horses with the sprung-ribbed greyhound look of an endurance athlete could turn out to be lazy duds that travelled at speeds of less than 10 kilometers an hour, while equines that looked like fat pony ride mounts—like the one I was currently strapped to—turned out to be stunning racers that left me simultaneously crying tears of joy and terror while I clutched their necks, my only thoughts centered on surviving the immediate few moments into the future.

When I was alone on Day 2, I had a wild dog chase me and my galloping mount…

So it was in the Derby, where the only predictable element was that everything was unpredictable. In the first four days, we suffered through record heat that hovered around 104 degrees Fahrenheit. The medical team put several riders on IV drips to combat dehydration, with repeat Derby rider Devan Horn—the field favorite to win—permanently knocked out of the race due to heat exhaustion and near kidney failure, who spent a night vomiting bile and urinating blood. Earlier that day, the same day I thought I might die on the bolting grey, Horn had collapsed off her horse, staggering to a nearby stream to cool off and finally deliriously knocking on the door of a ger, where a kind Mongolian family took her in until emergency help could arrive. Around the same time another rider, Sian Dyson, was evacuated back to Ulaanbaatar, also with heat exhaustion, after her condition couldn’t be stabilized out on the steppe.

Halfway through the race, I remember feeling crushed for these riders who had their adventure cut short, who’d both ponied up the $15,000 entry fee for the ride of a lifetime. But then, on Day 7, when the rains came and the temperature hovered around eight degrees and I battled a chest infection and fever through biting winds, in a fit of hypothermic delirium, I wished I could trade places with one of them, so I too could lie down and rest my shattered body.

This sort of irrational thinking haunted me throughout the 620-mile journey. When I was alone on Day 2 and had a wild dog chase me and my galloping mount for a good ten minutes, I started screaming “I DON’T HAVE MY RABIES SHOT” as the dog lunged and snapped with foaming fangs. And when I was safe five minutes later my deranged laughter at escaping death quickly turned to inconsolable weeping as I realized I’d dropped my GPS somewhere in the domain of the Mongolian Cujo. 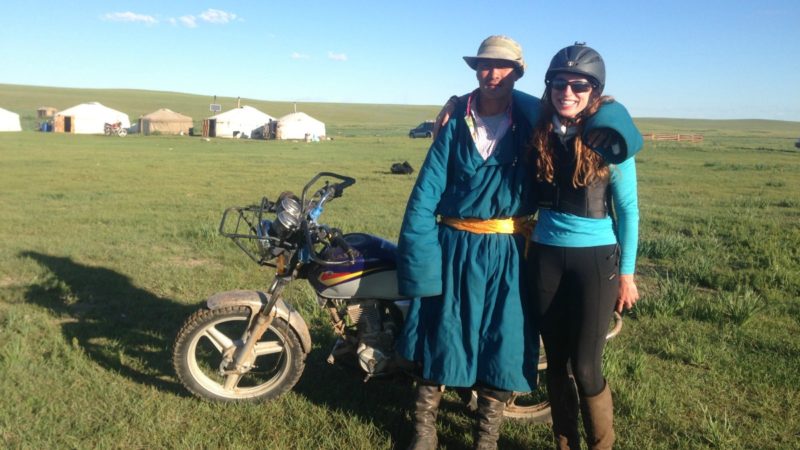 My hero, who took me on the back of his motorcycle to search for my lost GPS.

Half an hour later I was giddy again as I bombed across flats and through rivers at 80 miles an hour on the back of a Soviet-era motorcycle, my Mongolian driver swooping down and picking up my
lost GPS on the path.

The good, the bad and the ugly

“Things become very primal out there,” offered Derby volunteer Erik Cooper two mornings after the race was all over and we were lingering over coffee at a Mongolian camp halfway between Ulaanbaatar and Lake Hovsgol.

I’d just confessed a meltdown I’d had on Day 6, when three fellow riders on speedier mounts had abandoned me in a valley in the middle of a thunderstorm. With lightning striking the ground all around and both my horse and I shaking in terror, I started wailing “why the F—K did I think I could do this?” and almost pressed the SOS button on the spot tracker race officials required all riders to wear. An SOS call meant immediate disqualification and my race would have ended right there. After a moment of collecting myself, I continued on, repeating a mantra I’d adopted after the dog chase: You wanted an adventure, THIS is an adventure.

For four nights I stayed outside of Derby-sanctioned camps, relying on the hospitality of Mongolian families who didn’t speak one word of English. I’d ride up at dusk and play a game of charades, miming that I’d like to sleep in their ger. They all graciously obliged, no matter what their economic situation. I stayed with families who slept on dirt floors because they couldn’t afford beds and families wealthy enough to afford solar panels and freezer chests inside their gers.

I continued on, repeating a mantra I’d adopted after the dog chase: You wanted an adventure? THIS is an adventure.

The common bond was their kindness to strangers and respect for the horse. Each family I stayed with would immediately take my horse from me, untack it, and lead it to water, then hobble it for the night to graze. In the morning before sunrise, as I readied myself to race yet again, they would rise with me and assist me in readying my mount—a gesture I was incredibly grateful for due to my lack of experience handling the local horses (twice I was kicked when I approached them from the side instead of their shoulder).

I finished the race in nine days, firmly in the middle of the pack. Aside from muscle strains, bruises and chafing in unmentionable areas, I escaped unscathed. I had my first and only fall on Day five when one of my horses tumbled in a marmot hole and luckily only landed on the fatty part of my thigh. The most noticeable impact was the psychological scarring as for days after the race ended, I’d wake up in the middle of the night screaming “I NEED TO GET TO THE NEXT HORSE STATION.” 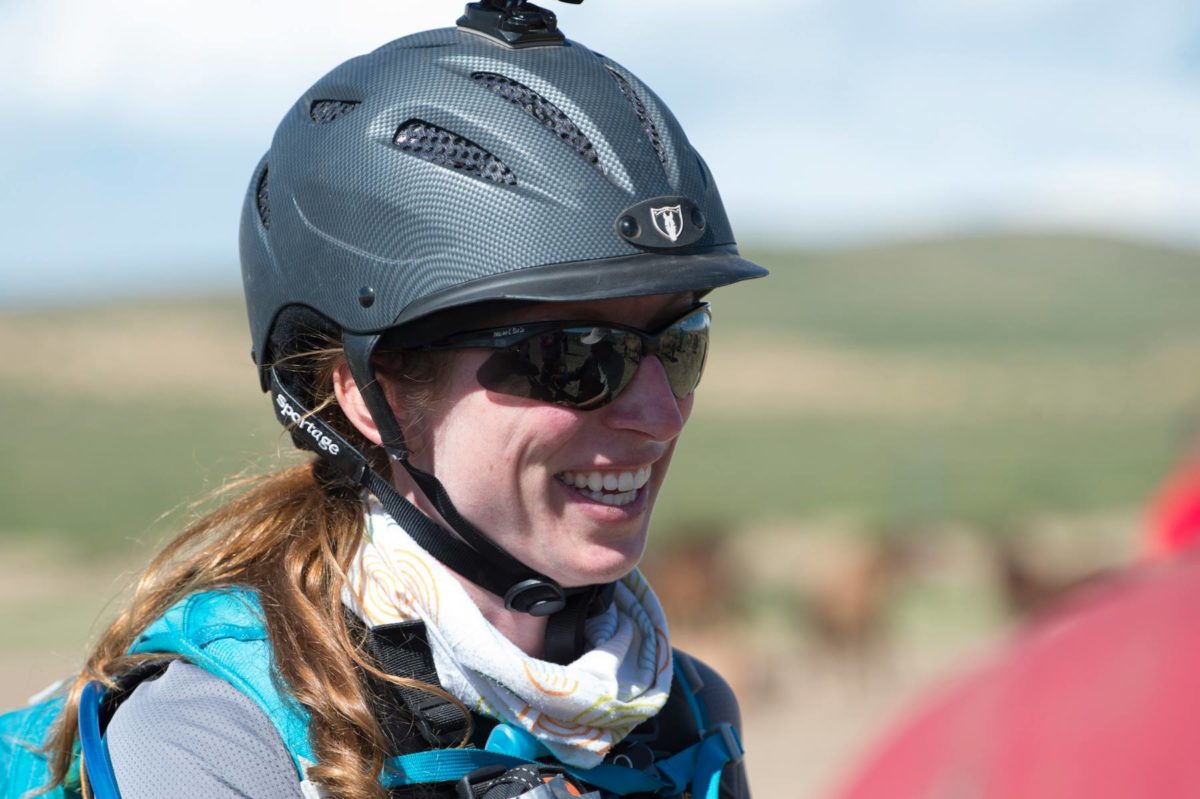 All smiles in the beginning…©The Adventurists

My performance won’t go down in the annals of Derby history, but the experience was life altering. I rode almost 200 kilometers alone in the Mongolian wilderness on horses I barely knew. I worked cooperatively with riders from all parts of the globe to navigate from horse station to horse station. I crossed cultural barriers and made friends with people who live a life entirely alien to my own. And in the darkest times, when I was sick, heat stroked, hypothermic and injured, I drew on an inner strength I was never aware I possessed.

On Day 6, two time Derby rider Simon Pearse said to me “If you make it through this race, you truly realize ‘shit, I can do absolutely anything.’”

And with this newfound confidence, I’m searching for that next adventure.