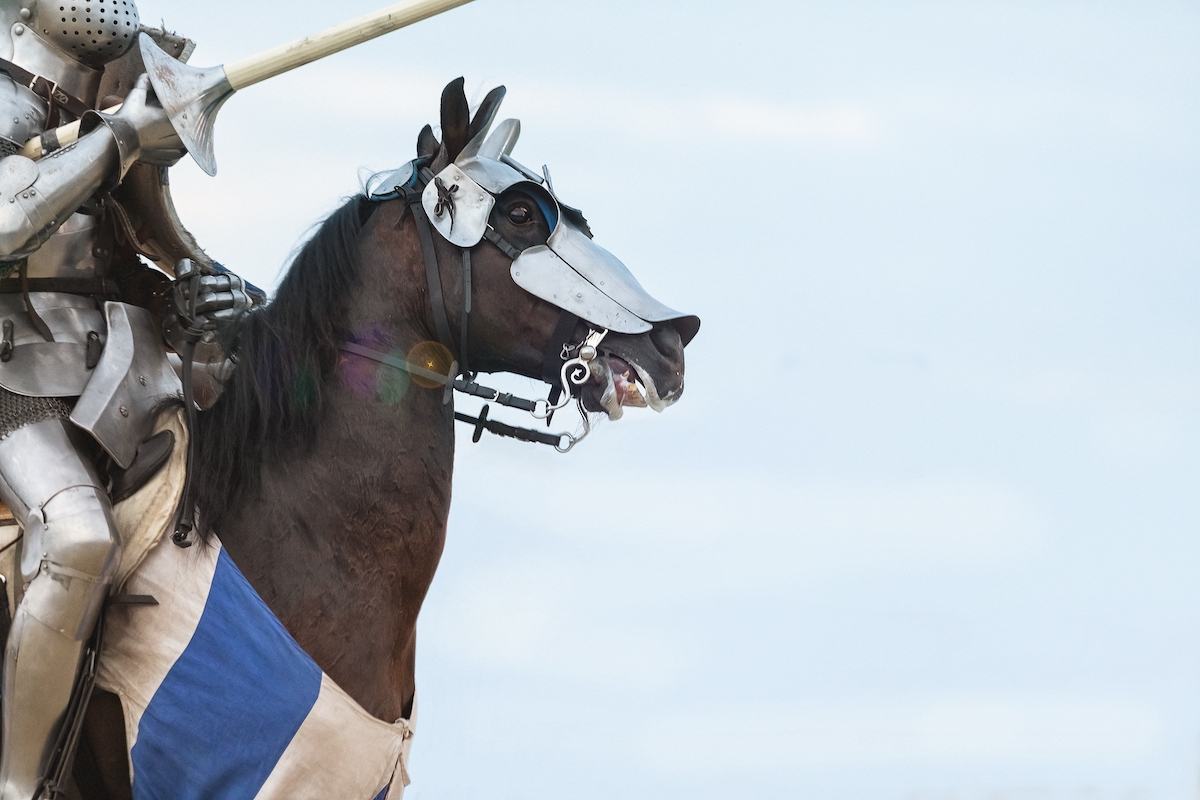 We do it because that is what we were taught, but why?

Cast your mind back a few hundred years and envision wandering about with an enormous sword dangling from your hip. Now, imagine if you will, trying to get on your horse, from any old side because rules concerning this have yet to be created. You put your foot in the stirrup and hoist yourself up giving your horse a bit of a jab in the flank with your scabbard. Your mount, suitably surprised, propels forward leaving you in the unfavorable position of being neither on, nor off.

It probably only took a few swordsmen landing in a heap before one of them said, “Hey, you know what?”

As most people are right-handed, swords were worn on the left, allowing you to draw your weapon with ease. And since the sword is swinging about on your left it makes sense to mount and work with your horse from the left to avoid any mishaps.

And all this time I thought it was some arbitrary Pony Club rule.

But that’s not all…

Did you know that swords and horses play a prominent role in how we drive cars?! I suppose if I spent any time thinking about swords, I might have come to this realization earlier, but we are here now.

If we go all the way back to Roman times, it is believed carts and chariots were driven with their left hand, leaving the right hand free to brandish weapons at annoying drivers when necessary. Because most people are right-handed, and you might want to stab someone from your chariot on the way to the market, you’d drive on the left side of the road. And in 1300 AD, the keep-left road-rule was sanctioned.

As the centuries passed, people continued to travel down the left side of the road as swords were a common accessory. These were still feral times and people felt compelled to fight things out, rather than talk them out, so in 1773 driving on the left in medieval Britain became official.

France, however, did the opposite and we can thank our postillion friends, creators of the posting trot, for this. Postillions, as we know, rode the left-hand horses that pulled wagons or post-chaises and as such the post-boys preferred to drive on the right side of the road, which enabled them to avoid wheel entanglements with other wagons and such. It also allowed the postillions to better see oncoming “traffic.”

Then came Napoleon, one of the great lefties of the world. Napoleon discovered that fighting left-handed in combat, when most fought from the right, was discombobulating for his adversaries and a sneaky military tactic. Napoleon, on his high horse, demanded that every country he conquered drive on the right.

There are some exceptions, such as my beloved Canada, and for that we have Henry Ford and his 1908 Model T with the driver’s seat securely placed on the left to thank. Several countries, including Canada, did a switcheroo in the 1920s to better suit their neighbours and this new form of transport.

Today only 35% of the world drives on the left-hand side.

And there you have it. It all comes down to swords and horses.