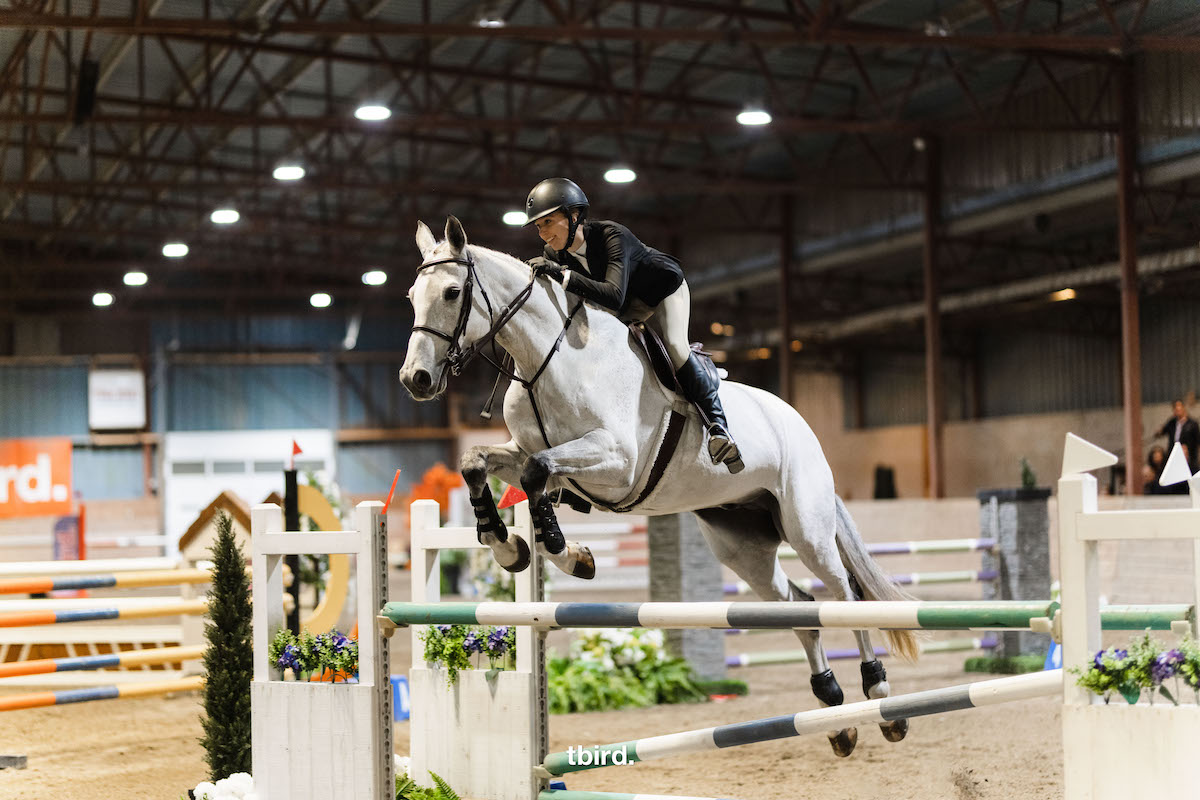 A year ago, Kate Walkington and Clarimero T were a new partnership just getting to know one another in the ring at Thunderbird Show Park—and to mixed results.

“I got him just over a year ago. We were kind of playing around in all three rings, doing the hunters, jumpers and the equitation,” shared the 16-year old. “Last year at this horse show, we were struggling to get around the meter jumpers and the 3’3” hunters.”

The CET Regional Medal Final, sponsored by Butet Sellier, is a jumper style equitation class open to the top 20 riders, ages 21 and under, in the BC region. The Final features two phases—flat/gymnastics and jumping.

As a pair new to the equitation—Walkington and Clarimero had only done three CET classes prior—the young rider and her trainers, Brent and Laura Balisky, set modest goals for her Regionals debut.

“We didn’t really know how my horse was going to react to the crowd and to it being a night class,” Walkington said. “It’s the first time he’s done medals as well, so we didn’t aim too high. We just wanted to get a good, solid first round, and we ended up exceeding those expectations.”

Walkington and Clarimero scored an 83 in the gymnastic phase. It was good enough to put her in second behind Lily Van Elliot and Carvill VA, who scored an 88.

“My horse is incredible. He was perfect with the crowd. He never batted an eye at anything,” enthused Walkington.

In Phase II, all 19 combinations returned in reverse order, which played to her advantage.

“Going into the jumping phase, I got to go in second-to-last, which really helped me a lot, getting to see all the counts that everyone was doing. Our main [goal] was really focusing on getting the numbers right and [riding] all those bending lines. My horse does tend to be on the lazier side. So, you have to ride up quite a lot. But he ended up doing it all really well. We got all the counts that we wanted,” said Walkington, who scored an 81.

“It was a super fun course to  ride. I was a bit intimidated going in: The jumps are a little bit bigger than what I’m used to.”

The top six riders returned in reverse order of their combined scores from Phase I and Phase II for a mandatory ride off, consisting of a jump-off course. Scores were awarded based on “the rider’s ability as a show jumping rider and the way the course was ridden regarding technical merit, judgement and the execution of an efficient time saving pace.”

“Going to the jump-off, we focused on the track. I really wanted to make sure I got those turns in super tight, because my horse is not super quick” Walkington explained. “And again, he was so great.”

Taking the win was the icing on the cake.

“It was all honestly super unreal,” Walkington said. “We went in there with a top six [goal]. To go in and win it was incredible. It’s not something I thought would happen, especially in my first year doing the medals.”