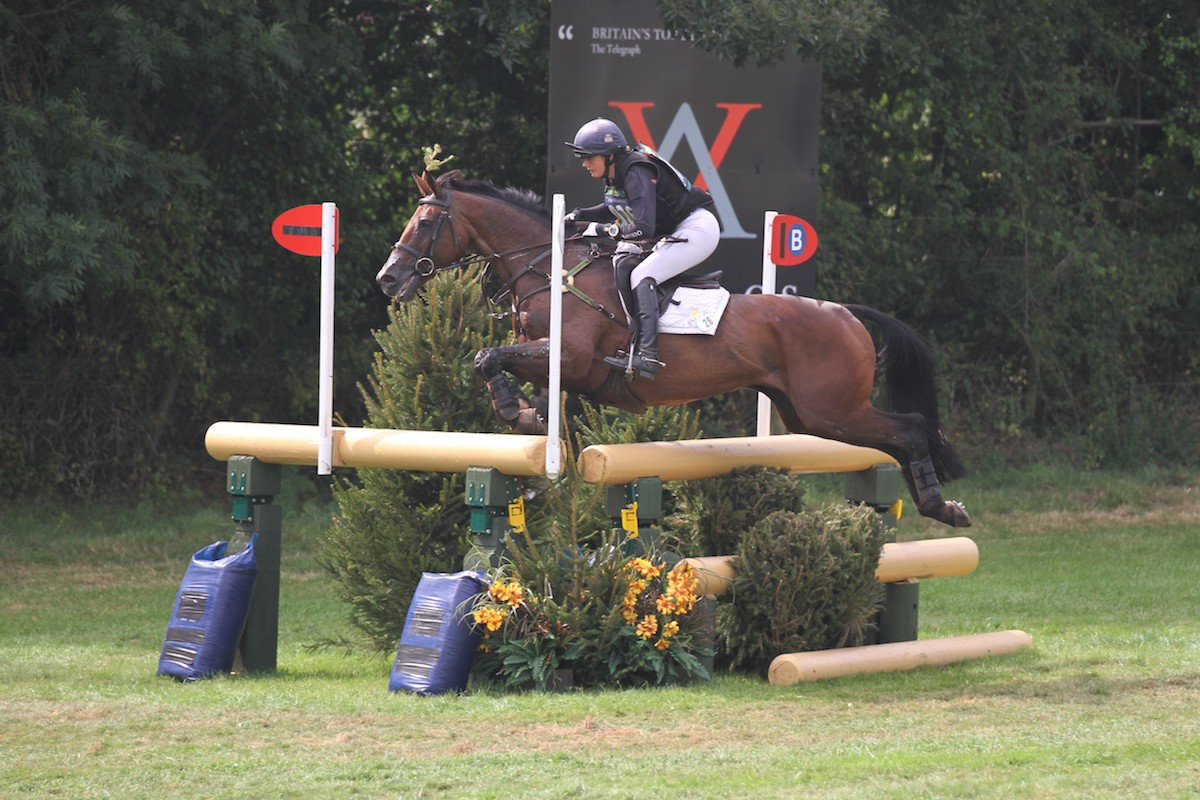 Any thoughts that the Burghley replacement, CCI5* Chedington Bicton Park Horse Trials, was a going to be a pale imitation of a ‘proper’ 5* event were banished on Saturday when the 32 original starters were reduced to 19 finishers over Captain Mark Phillips challenging cross country track.

Only three riders got inside the time of 11.16 minutes, with 13 riders posting cross country clears. Another four riders were only penalised for dislodging a MIM Clip at 16a. That fence was a true coffin at the bottom of a downhill stretch. The first element was pinned with the new yellow clip that caused controversy at the Tokyo 2020 Games and it certainly dislodged easily enough at Bicton Park. None of the riders who faulted there were in danger of falling.

Going back to the leaderboard, Piggy March is now at the head of affairs on 2019 Badminton champion Vanir Kamira, who did get home inside the time.

“It rode much as I thought it would, very tough but I knew what I was sitting on so I was quite confident,” said March of the track. “[Vanir Kamira] is just unbelievable! Two years since she has done a course like this and to go out and attack it like that. She gets very low as she gets fast but if I try to interfere, she just makes it clear I should leave her alone and I have learned to give her a longer rein and let her get on with it. Apparently, I was one of the best down the slope into the arena (Fence 8 and 9ab), but she makes it easy, she wants to go through the flags. Just an unbelievable horse.”

Rival Pippa Funnell scored 4.8 time penalties with dressage leader Billy Walk On. Funnell has dropped to third place going into the stadium jumping phase, with Gemma Tattersall now in second place on Chilli Knight, who was the first to get home penalty free. It was a super result for Tattersall, who has had Chilli Knight since he was a foal.

“I am the only person who has ever ridden [Chilli Knight] so we have a great partnership but he is so funny,” she shared. “You can look at him and think he is a bit like a pony with his stride and his agility, but then he starts galloping…and gets round with just as much scope as a horse twice his size.”

With the top three on scores of 25.5, 27.8 and 29.7, the ladies do not have a fence to spare between them. Breathing down their necks, in fourth, is another female rider, world champion Ros Canter (Pencos Crown Jewel) who is on 34.7.

“She went like the wind!” said Canter. “It was not my plan to circle before Fence 9 but when I came down the slope, I knew I had to. It was a five star.”

Funnell was also clear on her other ride Majas Hope, and the only multiple rider to complete on two horses.

The first male rider to feature on the score sheet is fifth placed Oliver Townend, who had a fall on his first ride, MHS King Joules. The world number one returned with his second horse, Tregilder, to become the third rider inside the time, but was among those penalised at Fence 16 for a dislodged clip.

Another to fall foul of the notorious clip was the competition’s oldest horse, Ringwood Sky Boy, who made light of his 18 year age. Ridden by New Zealand’s Tim Price, he sailed up and down the hilly terrain and pulled up looking ready to go round again.

“He is some horse,” said Price, “but I got a couple of time because I didn’t want to push him. He owes us nothing, this is just a good outing for him. But he did do a small spook in the lake to make sure I was paying attention! He actually lost a shoe as I came down to Fence 16, but he only tapped the fence with a hind foot so he didn’t really deserve to be penalised there.”

The oldest horse was shortly followed by the youngest rider. Felicity Collins scored time penalties on RSH Contend Or, but was otherwise clear.

Other notable clear rounds came from Francis Whittington on former Novice Champion DHI Purple Rain, Padraig McCarthy on HHS Noble Call and Richard Jones on Alfies Clover. William Fox-Pitt pulled up Oratorio when the horse got a nose bleed. Only four riders were eliminated for falls, but all four returned safely to their stables. The other non finishers were retired.