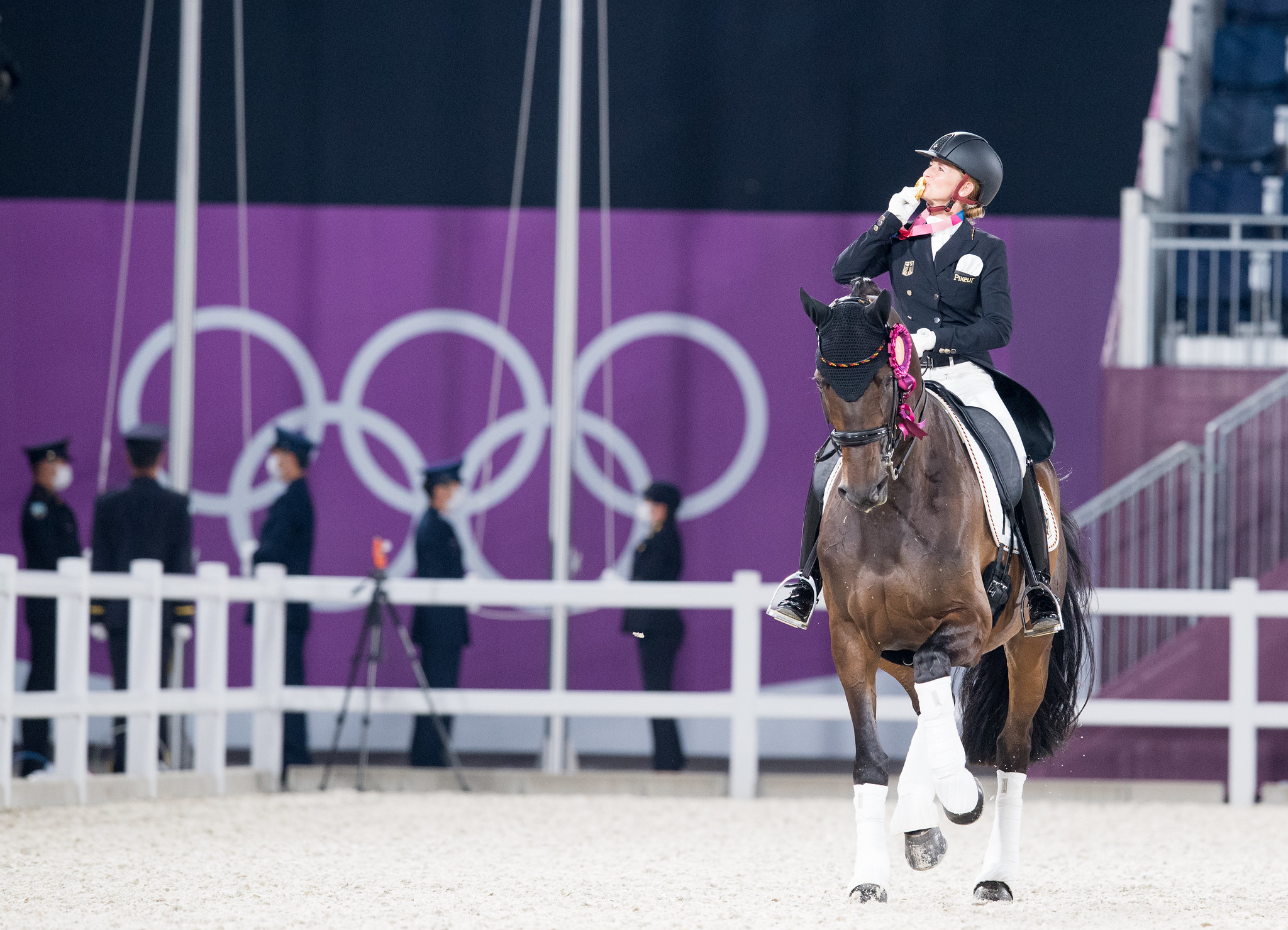 Needless to say, the Grand Prix Freestyle, the final dressage event in Tokyo, was an absolute blockbuster.

It took a score of 91.732 % to win gold, and unsurprisingly, Germany again dominated following the nation’s team gold medal from the Grand Prix Special test just a day ago. Jessica von Bredow-Werndl, who anchored that team, captured double-gold in her Olympic debut aboard the 14-year-old mare, TSF Dalera.

“I feel pure joy, relief and incredible gratitude,” von Bredow-Werndl said. “I have such a wonderful horse and such an incredible team that stands behind me.”

Riding her test to the soundtrack of the Academy Award-nominated La La Land, Bredow-Werndl pulled out all the stops, executing on what was also a technically intricate routine. They failed to score below 8 on just two movements: collected walk and extended walk. Meanwhile, 10s were littered across the scorecard, from piaffe to harmony, choreography and difficulty. In fact, this pair has score 81 10s over the course of these Olympic Games.

“It was my goal to crack the 90 percent,” von Bredow-Werndl said. “In the beginning, I used tactics, [and] in the end I took more and more risks. Everything was good, there weren’t any major blunders—instead many highlights, I could feel that.”

La La Land got snubbed for their Oscar for Best Picture. Bredow-Werndl did not.

Today, she rocked out to Beethoven’s Fifth Symphony, which, were it not one of the most famous pieces of classical music in history, I would have sworn was written specifically for Bella Rose’s extended trot. I thought they might just go straight to the top, and they put up a big score (89.657 %), but it was only good enough for silver on this day.

The individual gold medalist of the past two Olympic Games, Charlotte Dujardin (GBR), riding the young and exceptionally talented Gio, took home a second bronze of these Games, recording an 88.543 % score. Look out for this duo at the next Olympics, because while this may be the best that we’ve seen from them thus far, it is far from the best that we will see as this 10-year-old matures.

Adrienne Lyle (USA) elected not to contest the individual final with Salvino following the bay’s big effort in Saturday’s team final, leaving Sabine Schut-Kery and Steffen Peters as the only Americans in the field. Schut-Kery continued to overachieve in Tokyo with her longtime partner, Sanceo, and is the American hero we didn’t know we had. This pair hadn’t performed their freestyle in three years. Still, they came out and recorded a third-straight personal best score, this time 84.300 %, which was good enough for fifth individually.

“My husband made this music for me,” Schut-Kery said. “The first song with the piaffe and passage is from the Last Samurai, so it’s very fitting and I just love it. It has some elegant pieces, and I think it really resembles Sanceo.”

Steffen Peters (USA) and Suppenkasper were a joy to watch, as expected, and received especially high marks for musicality—with a meaningful soundtrack. They rounded out the top 10 on 80.968 %.

“The beginning of the music is ‘It’s Going to Be Okay’ by James Blunt, and personally, I’ve gone through a couple of rough years and my wife always kept telling me, ‘It’s going to be okay,’ so to honor her, I picked that music,” Peters said, “and also included the music I used with Ravel in 2009 when he won World Cup Finals. I figured after twelve years it was eligible for recycling.”

While off the podium Wednesday, U.S. riders must hold their heads high. They’ll return home with the first silver medals earned in Olympic team dressage competition in more than seven decades.

“We came into these Olympics knowing that we could really deliver on the world stage, and this historic silver medal is a testament to all of the hard work everyone involved in this program has built upon over the last several years,” U.S. Dressage Team Chef d’Equipe, Debbie McDonald. “What an incredible few weeks we’ve all had together, and I am just so proud of this entire team.”

As we all should be.