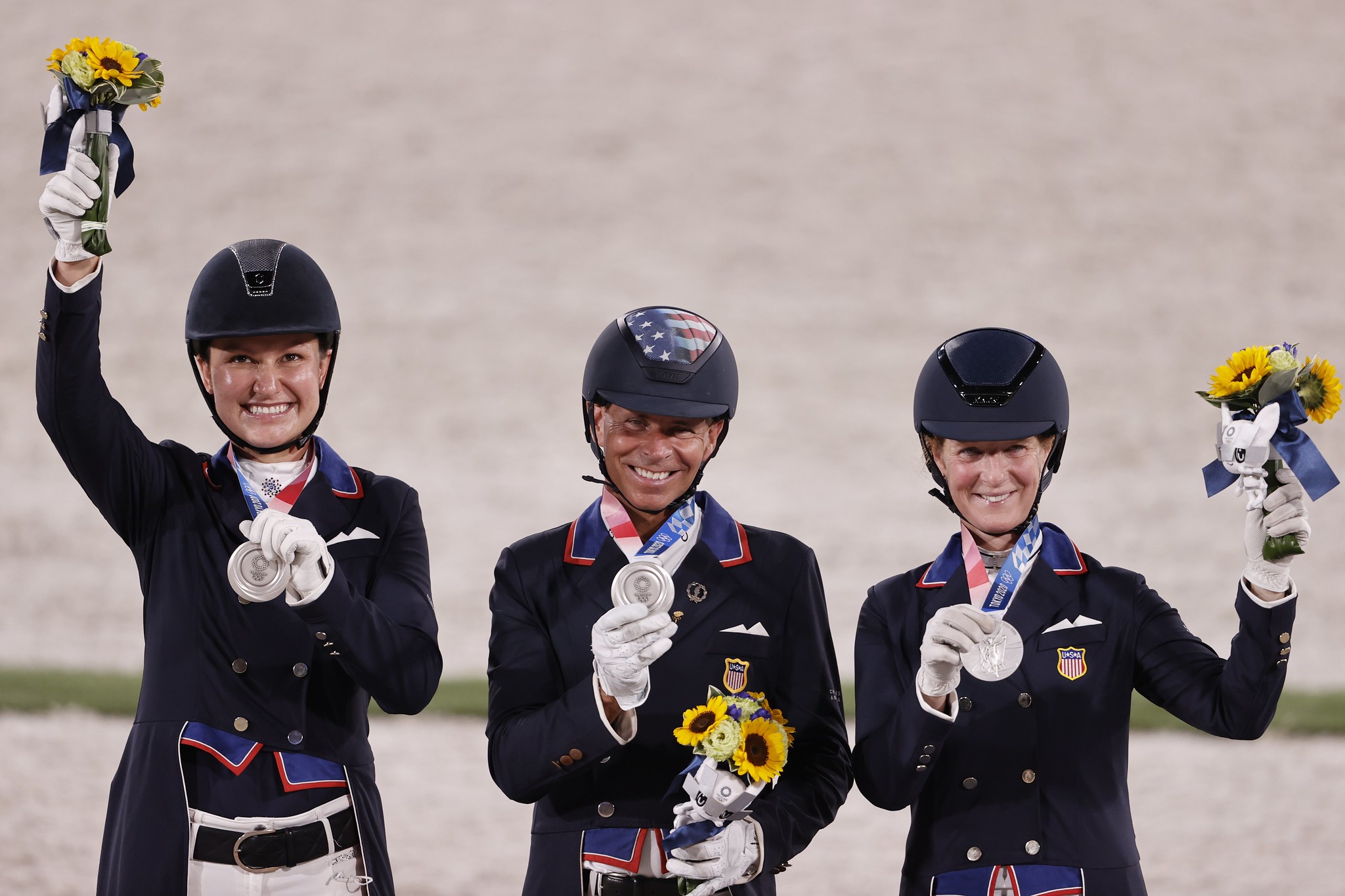 Heading into the final rotation of the dressage team finals at the Tokyo Olympic Games, Team USA sat in third position with the apparent task of maintenance.

Denmark was hot on their heels, with World No. 6 Cathrine Dufour on deck aboard Showtime Frh to challenge for the podium. All eyes were on the bronze medal.

A few minor missteps from Dufour (77.720 %) began to make the pathway to medaling seem a bit smoother for Team USA. Team anchors Sabine Schut-Kerry and Sanceo could achieve their averages in the Grand Prix Special test to clinch bronze. But in a dazzling performance, Schut-Kery made it clear that she wasn’t quite satisfied with just any medal.

Obliterating their personal best by more than three percentage points, Schut-Kery and Sanceo recorded a whopping 81.596 % to push the United States past Great Britain and into the silver medal position. Charlotte Dujardin (GBR) and the young Gio needed to score 80.274 % or better to hold their team’s position on the leaderboard. Instead, they received marks of 79.544 %.

Just like that, the United States earned its first team silver medal in dressage since 1948, making history Tuesday evening at the Baji Koen Equestrian Park in Tokyo, Japan. All three of the squad’s riders delivered: Adrienne Lyle and Salvino kicked off the evening with 76.109 %, a marked improvement from Sunday’s Grand Prix. Steffen Peters and Suppenkasper were mesmerizing, recording a personal best of 77.776 %. And Schut-Kery and Sanceo, averaging the lowest (while still very credible) scores of the group heading into these Games, ended up the most deserving of anchors. This pair has—on the world’s biggest stage—emerged with undeniable star power.

“For me, this was my first time here at the Olympics, and it was quite intense to wait that long for the end of the class, but I am so proud of my horse, my team, my owners, and the coaches,” Schut-Kery said. “It’s been a really, really great experience, and I am still a bit speechless.”

Germany, of course, did as Germany does in this sport. They dominated, though not without their own set of surprises. World No. 1 Isabell Werth was not the team’s anchor and did not deliver its highest marks. That honor went to Jessica von Bredow-Werndl and TSF Dalera, who could have scored 75 % and still come away with team gold for their country. With massive marks of 84.666 %, the pair set a new Olympic record for the Grand Prix Special. Germany has now won team gold in dressage at nine of the last 10 Olympic Games. (The exception: Great Britain in 2012).

Great Britain—consisting of Dujardin, Carl Hester and the exciting young Charlotte “Lottie” Fry—took home bronze this year, followed by Denmark, The Netherlands, Sweden, Spain, and Portugal. These eight nations were the best to emerge from Saturday and Sunday’s qualifying, in which riders executed the Grand Prix test.

As the first equestrian sport to take place in Tokyo, dressage was also the first to debut its new Olympic format, which, most notably, shrinks national teams from four to three members, with no drop score.

Change is always difficult, and while this format isn’t perfect, it made for an extremely exciting team final. Also new to the Grand Prix Special was the addition of (non-judged) music, which with no spectators in the stands, certainly helped create more atmosphere in the arena. Peters, known for his choreography (I cannot wait for his Grand Prix Freestyle), rode his test to a brilliant compilation that included Coldplay’s Fix You and Snow Patrol’s Chasing Cars.

Olympic dressage concludes Wednesday, July 28 with the individual final—the Grand Prix Freestyle—in which fans will be treated to encore performances from every member of the medaling squads. That includes Werth, who will become the most decorated female German Olympic athlete of all time should she take individual gold. (An aside: I was today years old when I learned that Werth is riding in a pair of “lucky boots” that she got in 1991—the same year I was born).

The 18 qualified riders competing will start fresh with blank scorecards in the Freestyle. Individual medals will be determined solely by the single test.