Luck Had Nothing to Do with the “Charms” Decisive MLSJ Win 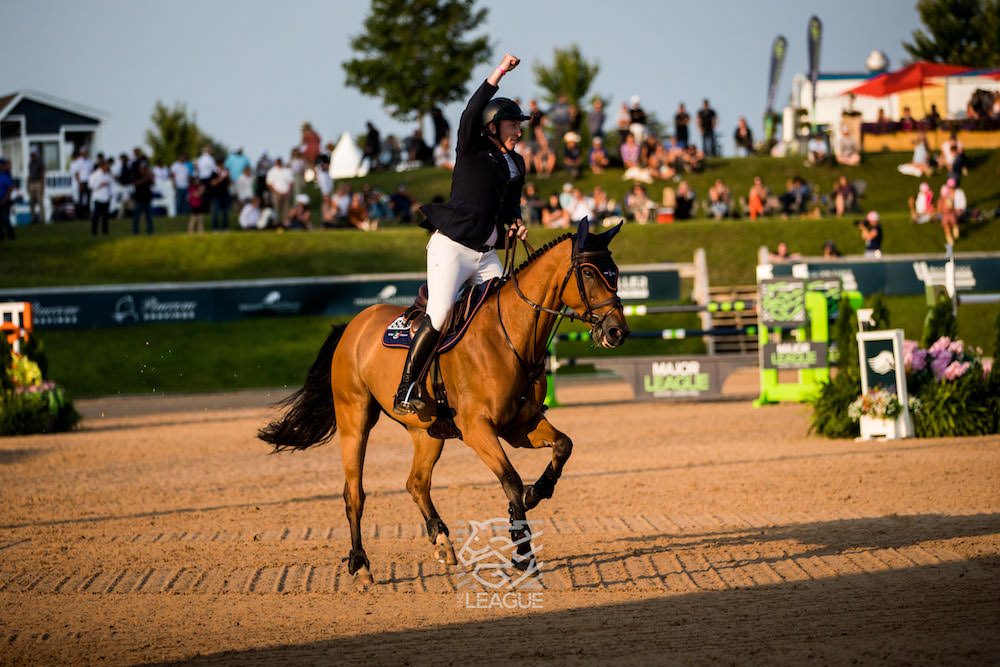 Co-founders Keean White and Matt Morrissey have been dreaming about the team concept behind Major League Show Jumping for years.

On Saturday night in Traverse City, MI, after months of pandemic delays and a forced location change, that dream finally came to life. And it was everything they hoped—and more.

There were highs—Lucky Charms three brilliant clear efforts in Round 1.

There was strategy—Roadrunners and Blazing 7’s “save the veteran for last” podium showdown.

There was speed—Jordan Coyle’s blistering fast jump off ride.

And ultimately there was a winning team: Lucky Charms, fielded by three Irishmen and captained by Shane Sweetnam.

Let’s get into the weeds.

All three team riders ride back to back in Round 1. The team score is determined by their collective faults. In the event of a tie between teams, total time over all three rounds decides the team ranking.

A.I.M. United drew first in the order. This week’s Rookie Spotlight, Sydney Shulman, kicked the team off with a brilliant clear aboard Contefina LVF over Marina Azevedo’s 12 obstacle course. But an uncharacteristic 16 faults from teammates Brianne Goutal-Marteau (Tanael Des Bonnes) and eight from Andrew Welles (Catoki’s Son Z) pushed the team total to 24 faults and, in the end, out of the competition.

Diamond Devils (Kristen VanderVeen, Natalie Dean, Erynn Ballard), touted as the team to beat, followed with a team total of 20 that ultimately put paid to their MLSJ bid.

Four teams advanced to the First Jump Off. The Blazing 7’s, made up of Nicolette Hirt, Chandler Meadows, and Rodrigo Lambre, and Eye Candy, composed of Jacqueline Steffens, Amy Millar, and Paul O’Shea, booked their tickets to the second round with combined team fault scores of 12 each. They were joined by The Roadrunners, who ended on team total of eight with a clear from Kaitlin Campbell and a pair of four fault performances by Kyle King and Erin Davis-Heineking.

The standout stars of Round 1: Lucky Charms. Riders Shane Sweetnam, Andrew Bourns, and Jordan Coyle posted three clear and quick to move straight into first place with a combined time of 196.79.

Two riders from each team contest the First Jump Off, a Table C format where faults convert to three second time penalties. In short: careful clears are not an option.

Blazing 7’s chosen two, Hirt and Meadows, took to the speed course first, finishing with a combined time of 99.76 seconds. But the Roadrunners Davis-Heineking and Campbell were faster, squeaking just ahead on a team total time of 97.74 seconds. Both teams would advance to the Bronze Medal Jump Off.

Eye Candy and Lucky Charms locked in the Gold Medal jump off, finishing with a combined time of 87.66 and 86.63 seconds, respectively.

In the third and final round it all comes down to a one horse and one rider for each team. Jumping the same track and faults-converted format as Round 2, the two riders that didn’t compete in the First Jump Off face off for the medals.

In the Bronze Medal Match, Blazing 7’s Lambre set the time to beat in 44.84 seconds. Speed savvy King and Etalon snatched the bronze medal out of their grasp when they shaved two and half seconds off, stopping the timers at 42.31 for The Roadrunners.

The Gold Medal Match saw Eye Candy’s O’Shea and Squirt Gun go faster still, tripping the timers in a speedy 41.72 seconds. But they were no match for Lucky Charms’ Coyle. Setting a blistering pace, Coyle and Picador set the arena alight, completing the course in a blazing 38.27 seconds with no faults to claim the top podium position and the lion’s share of the $200,000 prize money.

“Jordan is the fastest, as he proved,” said teammate and team captain Sweetnam. “He was three seconds faster than every other rider out there, and I thought I was going pretty fast!”

Next week, the teams will do it all over again when the second leg of the MLSJ tour continues in Traverse City!