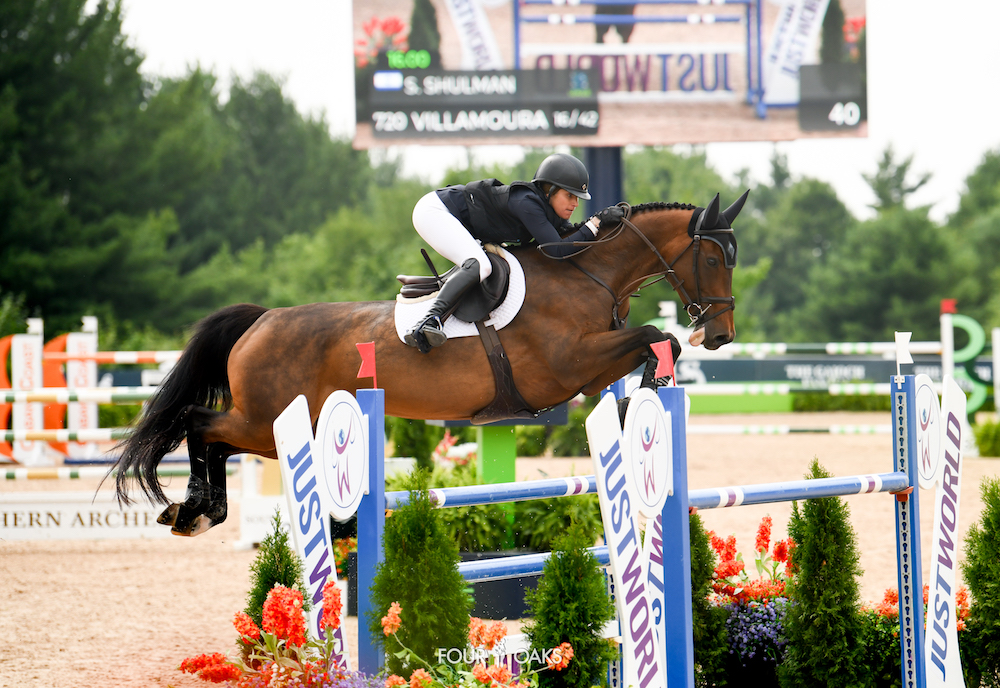 The inaugural season of Major League Show Jumping, a new league of five-star events in North America kicked off in Traverse City, MI, this week—the first of 10 events that will run through December.

With a new and unique team concept designed to generate excitement for both the sport enthusiast and casual fan, eight teams of five-star athletes will face off at each event in a three-round competition that includes not one, but two jump-offs.

There will be many familiar faces on this continental tour, particularly with two-time Olympic gold medalist McLain Ward and World Equestrian Games team silver medalist Margie Engle-Goldstein among the athletes participating in MLSJ. For this series, we’re shining the spotlight on the fresher faces, the “rookie” riders in their first season competing with an international team. First up: Israel’s Sydney Shulman.

It’s hard to believe Sydney Shulman is just 26 years old. The young professional has firmly established herself both a competitor and a coach on the show circuit, competing at the highest levels of the sport as well as coaching riders alongside her mother, Jill Shulman and Gabby Hero at the Greenwich, CT-based Back Country Farm.

Shulman has truly gone from strength to strength in the saddle, from ponies to international show jumping. As a child, she was a two-time a USEF Pony Finals individual jumper championship gold medalist. She later won the prestigious R.W. “Ronnie” Mutch Equitation Championship at the 2013 Devon Horse Show before earning a bronze medal at the North American Junior and Young Rider Championships, now known as the North American Youth Championships (NAYC), later that year.

She immediately turned professional upon aging out of the junior ranks at 18 and has only continued her winning ways. She was both the leading international open jumper rider and leading U25 rider at the 2019 Washington International Horse Show.

Shulman will unquestionably be an asset to the A.I.M. United team, whose initials stand for the American, Israeli and Mexican riders that make up the squad. Shulman has had her greatest successes in speed classes; her top mount Villamoura—always placed for success with some adept management from Shulman and her team—is undoubtedly one of America’s most talented and decorated speed horses. The quick-footed mare has accounted for 10 of Shulman’s 23 career international victories, including both career CSI5* triumphs.

Shulman, who switched nationalities from the U.S. to Israel in 2018, will compete alongside Americans Andrew Welles and Catherine Tyree in Major League Show Jumping’s inaugural team event in Traverse City, MI.

“I think we have an edge, because there are very fast riders on our team, which will play big factor in the team classes,” Shulman told Major League Show Jumping. “There’s a nice group  of horses underneath the riders that we have.”

In addition to Villamoura, Shulman boasts the 11-year-old chestnut mare, Azilis du Mesnil and a brand new ride — 9-year-old Contefina LVF, the homebred mount of A.I.M. United (and Team Israel) teammate Ashlee Bond. Bond is sharing the mare with Shulman while she is in Tokyo contesting the Olympic Games. Now that’s a teammate.

“I think having Major League Show Jumping in North America will be amazing,” she said, “because most of time, you only see these kinds of events specifically in Europe. I think this will bring a really high level of sport here.”