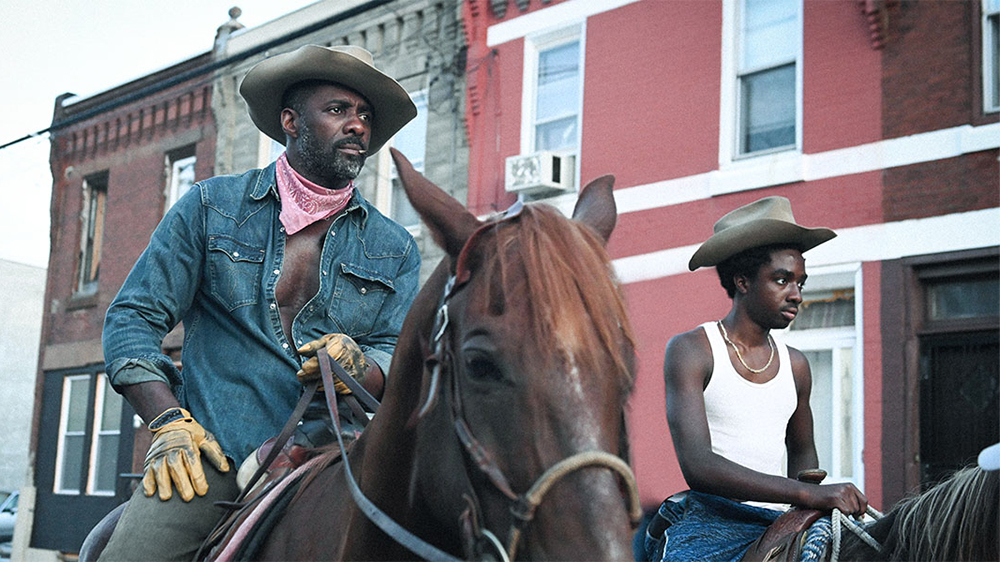 The new Netflix film, Concrete Cowboy, is much more adult than the young adult novel it’s based on.

Unlike G Neri’s Ghetto Cowboy, there is more swearing, drugs, and violence. However, both celebrate the century-long legacy of North Philadelphia’s Black Cowboys and the healing alchemy of a boy and horse.

This father-son tale tells the story of Cole, who, after getting kicked out of school for fighting, is sent to live with his estranged father, Harp, in Philadelphia. Harp, played by Idris Elba, is a black cowboy, a horse owner, and a member of the Fletcher Street Stable. (Fun fact: Polo player and author Kareem Rosser, who appeared on HN Reads in March, stood in for Alba’s riding scenes.)

Once in Philly, Cole begins a double life. At night, he deals drugs with his friend Smush. During the day, he learns to become a horseman like his father. While Cole finds himself falling deeper and deeper in love with horses, the two lives threaten to tear him apart.

While the themes explored in Concrete Cowboy run deep, the plot is flimsy and the characters are often hollow. The scenes where emotions run high are well-acted but fall flat because the writing fails to give any character much of a backstory.

Early on, there is the painfully tired trope of an untrained kid, in this case, Cole, climbing on the back of Boo, an untrained horse. While the sweetness of the scene was admirable, it will make anyone who has spent more than 10 minutes around horses facepalm.

Despite the wild-horse-no-one-can-ride issue, the chemistry between the young man and the buckskin gelding makes the film worth watching all by itself. The quiet moments between Cole and Boo create a captivating contrast when juxtaposed against the loud and complicated chaos of Northern Philly. Cole’s relationship with Boo is reliable and safe in a way nothing else in his life is.

The film also captures the realities of horse ownership in a way many movies gloss over. Cost, sacrifice, dirty barn chores, and the precarity of urban horse ownership are all front and center. A sequence when Cole shovels manure in brand new, bright white Air Jordan’s is both satisfying and relatable to any who has blistered their palms on the edges of a wheelbarrow.

As I watched, though, I worried about the comments my fellow equestrians would have made if they walked into the stables on Fletcher street. The cobwebs and haphazard tack and tools everywhere made me worry that some would cry “neglect” even if the horses were fed, loved, and well tended. It is not a crime to be poor, although sometimes the horse community behaves as if it is.

While the film isn’t perfect, it is a solid step toward addressing the historical erasure of Black and Brown equestrians and their many contributions to the horse industry. Early in the film, a group of riders sitting around a campfire in front of the stable explain the historical ties of the word cowboy to African American cowhands—a fact defended by many historians. Many of the actors in the film are also members of one of Philadelphia’s real-life urban cowboys.

In one scene toward the end, we see the face of a small child on a bus light up as he watches Cole, Harp, and the other cowboy’s race through a vacant lot on the backs of their steeds. Not only is this scene an example of the spectacular equine photography in film, but the wonder on the child’s tiny face reminds us why representation matters, especially as the horse industry tries to grapple with its complicated history and a more inclusive future.