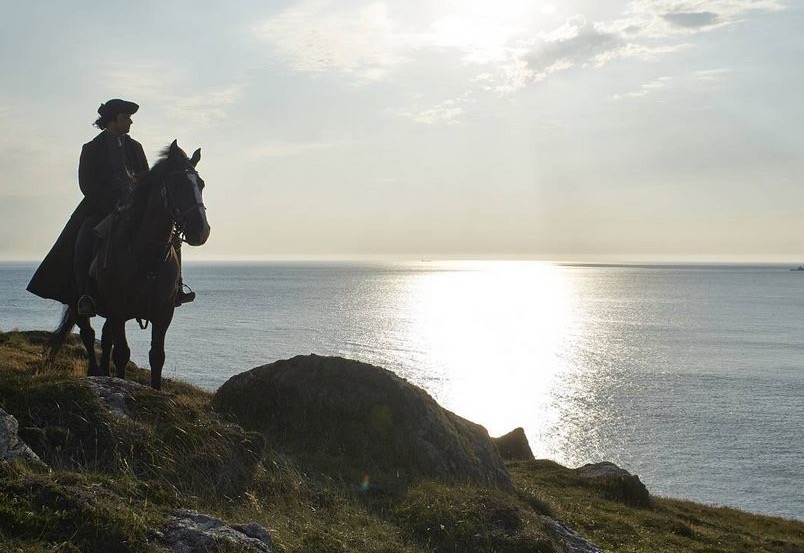 I don’t know how I managed it, but I missed the Poldark wave when it first hit.

Perhaps it’s because I don’t like period pieces and therefore ignored all the hoopla surrounding the show. The only thing I knew about it was that Aidan Turner was the star and played a swashbuckling martyr, though I don’t think that is how the media described it. Since I like looking at him and since the cool and safe thing to do these days is to watch copious amounts of TV due to this pandemic, I decided to tune in.

How I missed the fanfare about the horses in Poldark is a mystery. I’m an avid PBS viewer and have followed Atkinson Action Horses on social media for years. Yet still, I managed to overlook this gem.

Though I’m late to the Poldark game, I am caught up now and I have a few things to say about what I saw. Some of which may have been said before. I didn’t look into that either.

While the splendor of the equines certainly caught my attention, it was Ross Poldark’s endless desire to gallop uncomfortably close to the cliff edge that struck me. Back and forth—again and again—he plied the skyline with vengeful purpose; his jacket billowing out behind. There is no denying the breathtaking scene. However, I must confess I was taken with his tricorn hat’s commitment to remaining on his head, despite the ferocity in which he and his horse were traveling.

And just when I was coming to terms with the hat, Ross would, as if struck by reason, make a 90-degree turn inland, suggesting he was going the wrong way all along and was desperate to get back on track.

Along with all the pretty horses in the show, you will find a lot of pretty people with nice teeth and funny hair. It’s clear the creators made a conscious effort to objectify the men as much as the women, which was nice to see.

Though, it has to be said that putting someone as hunky as Aidan Turner on the back of a horse is risky business because even the best looking can be reduced to cringe-worthy if it’s apparent, they don’t know how to ride.

A scrambling canter transition can overshadow Turner’s brooding looks, a rising trot that somehow lacks any rhythm from Turner can produce amused glances between viewers and the disregard for any outside rein when turning made me wince.

So, when Ross Poldark decided to circle his Irish horse around his fiery-haired lover in a whimsical display of affection, which was a doubtful move from the start, only to notice an outside shoulder that needed controlling, I have to admit my adoration turned to embarrassment. Mr. Turner was reduced to a common man on a good-looking horse.

I know we can’t expect actors to know how to ride but can we at least admit that trying to dance with your lover while on horseback, is a bad idea whether you know what an outside rein is or not?

I hate to be the one to bring this up, but I’m sure I am not alone. All shows featuring horses tend to get it wrong because horses are confusing unless you are fully immersed in the sport. I’m sure the same can be said for programs featuring skating or swimming. Who has time for that kind of research?

If Poldark is a decent representation of life in the 1700s then I understand it was vitally important to gallop towards and away from everything. No one seemed to go for quiet hacks through the leafy lanes of English yore. Riding was, perhaps, a necessity not a pleasure.

Horses were the only transportation back then and even though the Poldark clan had a mail service that rivaled the speed and frequency of a text message, thanks to more galloping horses, everyone arrived and departed at speed. The horses of the 1700s either warmed themselves up or went from a standstill to a full gallop cold.

It makes sense I suppose.

Imagine, if you will, needing to secretly get over to Trenwith tout de suite to see your darling Elizabeth. Night is falling, dark clouds are looming and George’s men are lurking. You’re tacked up, the wind blows at the tails of your jacket, you leap on, nudge your horse toward the open field and do a little flatwork to warm those cold muscles up. Then, and only then, do you take off at great speed, gallop along the edge of a cliff, do a 90-degree turn and then onwards to your darling.

This is just the way of it, and we can either choose to watch and laugh or not watch at all. Generally, I’d say we happily plonk ourselves down to watch these shows knowing the entertainment value will be more than the writer had hoped for.