The Horses of Poldark 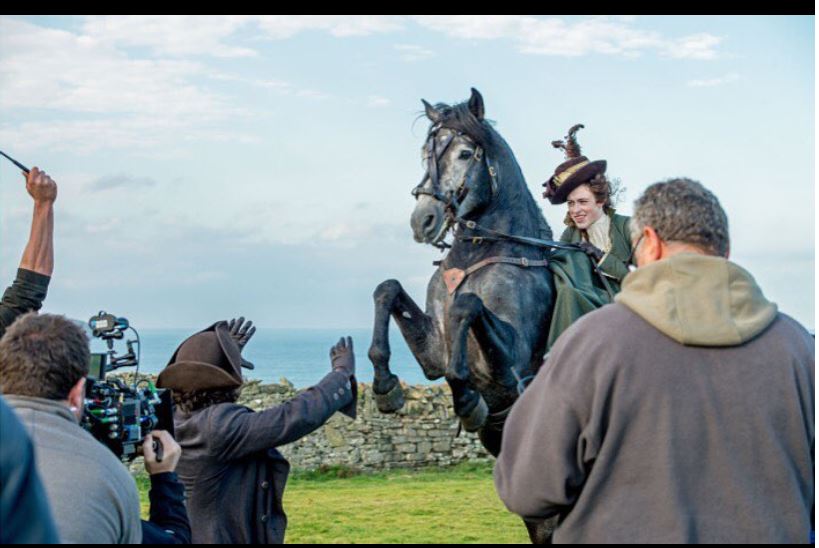 On Sunday, season three of Masterpiece’s Swashbuckling series, Poldark, thunders back onto tiny screens across the United States.

This 18th-century drama stars Aiden Turner as Ross Poldark, a roguishly handsome, Cornish bad boy who is always knee deep in some personal or political strife. Many flock to the show for the beautiful shots of the Cornish coast. Others are drawn to the romantic storylines and escapist fantasy of the period to get us through the long work week ahead.

For me, and many other horse loving Poldark fans, we keep watching because each episode is punctuated with scenes of horses cantering across one dramatic landscape after the next. Let’s be real a second, what equestrian hasn’t daydreamed about a good gallop across a Cornish beach wearing a tricorn hat? Ok, so maybe just me.

While the cast of the hit show has gained increasing celebrity status, their equine counterparts are also getting their moment in the limelight. The horse that Turner rides in the show, a 16-hand black Irish Draught name Seamus, is a fan favorite. He has his own Facebook page and has been the subject of special features that have appeared in the UK’s Daily Mail among other publications.

“We call him Famous Seamus,” Mark Atkinson, the Horse Master of Poldark, told me.

He continued with a recent anecdote that happened on set:

“A bunch of ladies were waiting nearby St Agneshead where we were shooting to catch a glimpse of the cast. They were quiet and polite as Aiden went by, but when Seamus came out, they all went a bit mad.”

That’s right. It was the horse that they wanted to see! 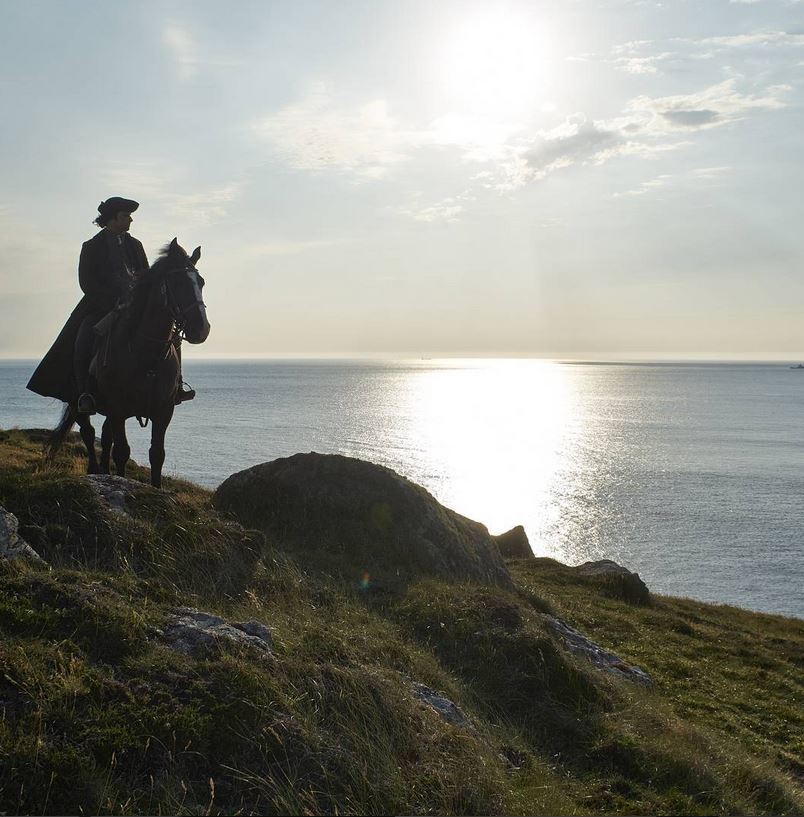 And why not? This gorgeous Roman nosed, white blazed draft type is wonderfully photogenic and more historically relevant to the time and place. In fact, it was this attention to historical detail that made me interested in interviewing Atkinson in the first place.

As the horse master of Atkinson Action Horses, Atkinson and his crew have been providing horses for films and TV in the United Kingdom for 32 years. They currently have 50 horses. Mark’s son, Ben, is the third generation of Atkinsons to make horses his life work and is currently the head trainer. He is often seen on his five-mile runs around the village where they live with his liberty horses following right behind.

“All of the neighbors have grown quite used to it,” Atkinson said. 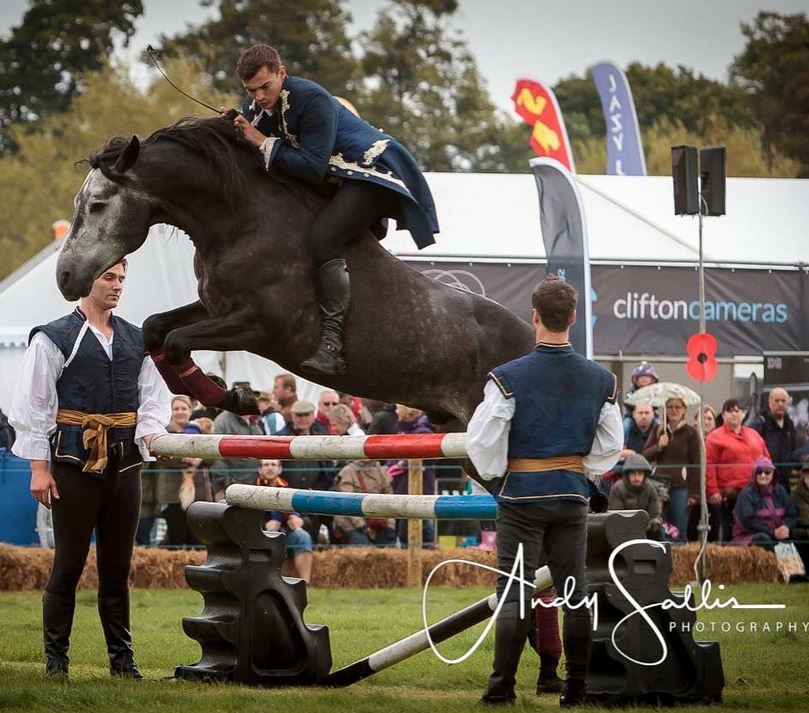 Ben’s main horse, a dapple-Grey Andalusian named Malik, will also be appearing in season three of Poldark. Spanish horses would have been accurate choices for the some of the wealthy characters, Atkinson explained.

It’s not hard to imagine George Warleggen, the local banker, and Ross Poldark’s sworn enemy atop one of these grand beauties. Poldark rivalries aside, Malik is also an impressive horse to watch, and Ben Atkinson’s Instagram Feed shows just how versatile this horse and his trainer truly are.

Capturing all those shots of galloping hooves is no small endeavor. The horses usually arrive at least two hours before everyone else so they can settle into the set. From there, the day can be as simple as a couple of dressing horses, which are in the background of a scene eating or waiting by a hitch rail.

Other times the horse is crucial to the scene itself, and is usually ridden or pulling a carriage. 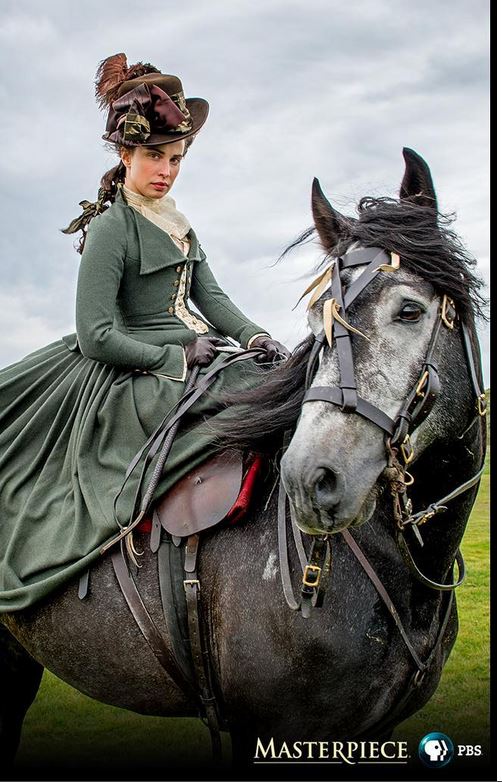 “We rehearse the scene with the horse before we add the actors,” said Atkinson. While it’s always nice if he can work with an actor who can ride, sometimes he just has to make them look as though they can.

A typical day of shooting wraps up around six or seven in the evening, and then there are a couple more hours of work ahead getting the horses fed and settled for the night.

With all his experience working with horses, actors, and film crews, Atkinson and his team clearly have a great deal of insight into horses, so I had to know, what advice would he give to others who work with horses?

“A good horse is a relaxed horse. So many people expect too much too soon,” he said, citing the example of a new mare he had on set that he likes. According to Atkinson, the horse always stops and thinks, and when they let her do that, she’s often willing to try something new. This kind of care, patience, and horsemanship rings clear in each shot.

And yes, Mark assured me that the lovable Famous Seamus will also be in season four.

Gretchen Lida is an essayist and equestrian. Her work has appeared in Brevity, Earth Island Journal, Washington Independent Review of Books, and many others. She has an MFA in Creative Nonfiction from Columbia College Chicago and currently lives in Wisconsin. Follow her on Twitter at @GC_Lida.