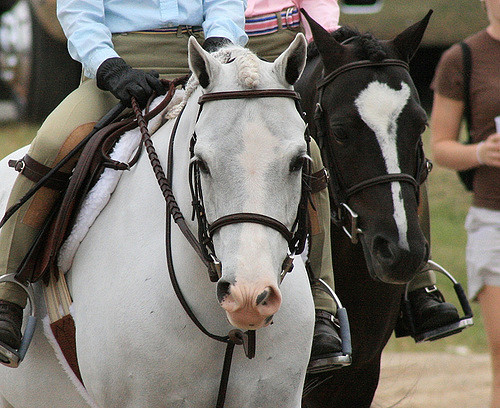 OCALA, FLORIDA—A show steward at the newly opened Wonderland Equestrian Center was inadvertently forced to do his job on Thursday when he stumbled upon a display of blatant cheating during the afternoon’s Pony Medal class.

Horse show mom Debbie Clayton of Orlando was caught in the act of several forms of sabotage initiated upon her daughter’s fellow child competitors. Among them: using a pair of scissors to snip two elastic girths, splashing mud on the legs of three grey ponies, and slipping into stalls the morning of the class to undo four fake tails.

Steward Ron Mauve caught Clayton, scissors in hand, as she was sawing away at one seven-year-old’s fuzzy girth. When asked what she was doing, Clayton had a ready answer.

“She told me she was just helping the girl remove a tag on her saddle pad,” Mauve said. “But I knew better. I had already watched her splashing like mad in a couple puddles near where some white ponies were standing in the schooling area. She told the grooms that there was a bee.”

While the class was underway, two ponies lost their fake tails in the warm-up ring, while a third made it halfway around her course before the yarn gave way. Clayton could be viewed standing along the rail, a broad smile on her face. “Well, that’s just not proper turnout,” she was overheard muttering, while tsk-tsking aloud several times beneath the judge’s box.

“I went over again and told her, nicely of course, that it was time to knock it off,” Mauve said. “We had little kids jumping in that class, and their ponies can only be expected to steer, find the jumps, and count strides on their own. They can’t be dealing with things like lost tails or saddles slipping, or children flying everywhere.”

Clayton, whose daughter finished third in the Medal, continued to deny the allegations until she was shown video footage captured by horse show security. Though she was issued an event suspension onsite by the National Pelham Bit Association (NPBA), Clayton said, via text message, that her standing with the United States Equestrian Bureau (USEB) was just fine. In fact, she said, her daughter would be competing in the Small Ponies in Wellington next week.

When questioned about this comment, USEB issued the following statement:

The National Pelham Bit Association (NPBA) is not an affiliate of USEB, and therefore, we can’t be sure that their decision, based on substantial, secure, timestamped video footage, meets with USEB licensing rules for proper evidence submission, as stated in Sub-Chapter 234,232, Section 234iiiii. We have no idea how the NPBA defines “cheating,” if they even have a rulebook, or if they just jot things down on the back of used fast-food napkins. In the interest of horse and human welfare and safety, we can’t be expected to ban Ms. Clayton from future events based on the word of the NPBA, however compelling their “evidence.”