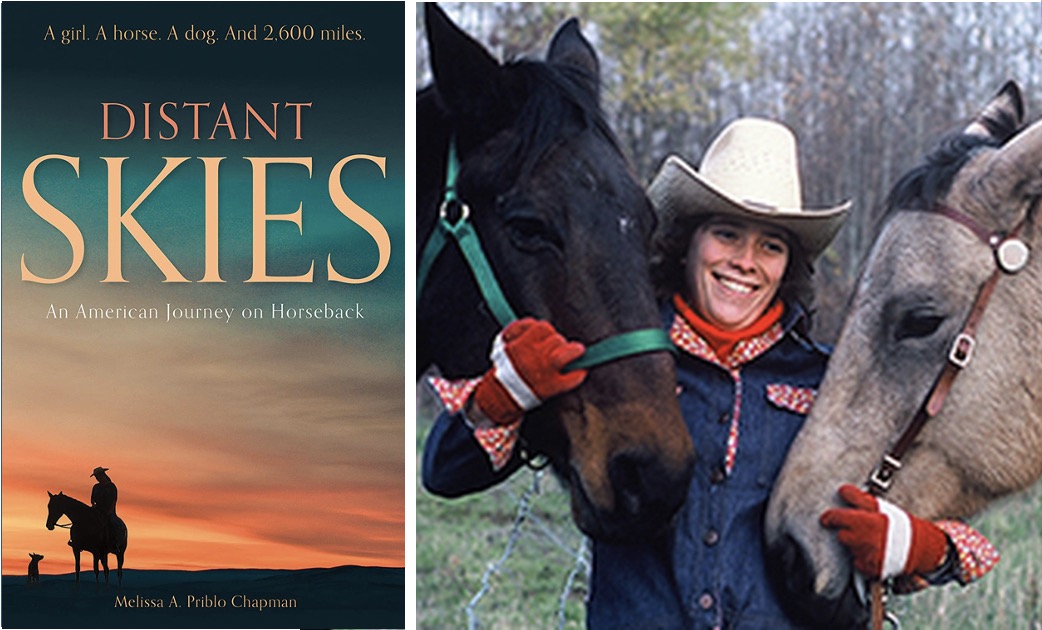 I am a sucker for long-distance adventure memoirs.

If it has an unconventional journey that takes more than 100 miles, I have probably read it. From the comfort of my own home I watched for bears on the Appalachian Trail with Bill Bryson in A Walk in the Woods. I wept my way along the Pacific Crest Trail with Cheryl Strayed in Wild and even ran from Canada to Guatemala with Noe Alvarez in Spirit Run.

If that trekking memoir has a horse in it, I get even more invested. My heart raced along with Lara Prior Palmer as she galloped through the 1,000 kilometer Mongol Derby in Rough Magic, and I fell in love with the grumpy geldings Tim Cope rode across the steppe of Asia and Europe in On the Trail of Genghis Khan.

Melissa A. Priblo Chapman’s new memoir Distant Skies: An American Journey on Horseback is the newest addition to my shelf of adventure books. Melissa rides 2,600 miles through more than a dozen states to fulfill her childhood dream of riding from New York to California.

True to the genre, she faces hardship and meets occasional good fortunate on her journey. A cast of characters come in and out of Melissa’s story—some like angels, others to cause problems. However, the thing that makes Distant Skies so worthy of its place on the shelf is its sweetness, generosity, and downright good horsemanship.

As Melissa rides her buckskin Quarter Horse, Rainy, from state to state, the individuals they meet give the book color that makes the pages fly by. Early in the book, she stays with the Amish. Later, she is coaxed into riding in her first speed event at a rodeo. Melissa meets cowboys, animal rights activists, reporters, and people of all kinds along the way. Even the ones she does not get along with are written about with measured care and consideration that is both disarming and wonderfully readable.

Equally poignant is the landscape that expands out in front of the reader as the journey progresses. The rust belt forests shrink into the cornfields of the Midwest and then slide away into the desert as Melissa heads further and further west. We feel the heat bear down in some places and feel the cold crisp evening air in others.

Her companions along the trip include Rainy, a dog named Gypsy, and an opinionated pack mule renamed Amanda after the name Sweetie proved inaccurate. Even though the group’s life is often full of uncertainty on the road, Melissa’s first concern is always her animals’ well-being. The horses regularly get looked over by a vet; she writes about their feet and where they stay for the night—always putting the animals’ comfort before her own.

Melissa took her seven-month-long continental journey in 1982. The United States has changed a great deal in those 38 years. There are many more people and houses, much more technology. Some may argue that it is more dangerous and more divided. Nevertheless, if there is one thing that to take away from the story, it is that the generosity of strangers can be boundless.

We can learn much from those we meet through horses, and hopefully, this book will be a siren song to the next generation of long riders who saddle up for distant skies.

Melissa A. Priblo Chapman is this month’s featured author on HN Reads! Tune in Wednesday, Dec. 9 for her live Q&A with host Gretchen Lida. Distant Skies: An American Journey on Horseback is available on Equishopper and in bookstores everywhere.