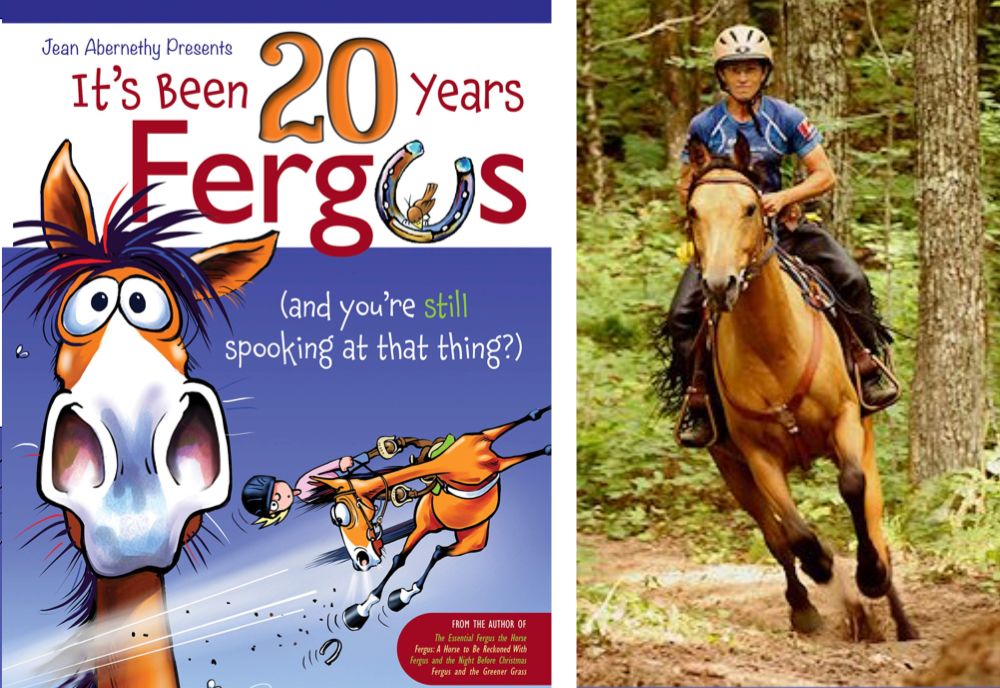 The cartoon bay gelding, Fergus, is perhaps one of the earliest Equine Social Media Influencers.

His big Roman nose, bay coat, and eyes that bug out when he spooks at something are beloved by horse lovers around the internet and beyond. I do not remember the first time I saw a Fergus comic, but as a horse girl, the image of him has floated in and out of my digital experience for at least the last decade.

And unlike Grumpy Cat, Myspace, or Vine, Fergus is still going strong.

Even more remarkable is that these short, funny, often sweet comics have not only aged well but still speak to audiences with the same poignancy as if they were written yesterday.

It’s Been 20 Years Fergus (and You’re Still Spooking at that Thing?), now available on Equishopper, is a new collection of comics featuring Fergus and his ragtag group of barn mates and riders. The book is held together with notes from author Jean Abernethy to Fergus about how he has evolved. We see how the comic changed over the years, from a doodle to a Facebook Icon with more than 300,000 followers.

Initially, people, not horses, told the jokes in Jean Abernethy’s comics, but as the years went on and Fergus came to life, it was the horses that began delivering the punch line. Fergus and his friends not only all have unique personalities, including an assertive pony and a wise-cracking unicorn, but they also all seem to have a keen sense of observation that would make many real-life comedians blush with envy. They can make jokes about snow, rocks, and tack boxes and find endless humor in their troublesome human counterparts.

Fergus and his crew also understand that the best place to find a good joke is laughing at themselves. Each horse’s often subtle self-deprecation has contributed to the longevity of the Fergus comics. Whether it is a baby horse trying to figure out the world, a Halflinger trying to pick up mares, or Fergus himself doing whatever he can to get out of work, these cartoons tap into all horses’ ability to be both flawed and astounding.

Another impressive thing about the spooky, pedigree-less Fergus is his versatility. It appears he can do just about any discipline. In some comics, he herds cattle out west; in others, he practices fine driving. He races with Thoroughbreds, jumps, gives lessons, and does dressage. This versatility is probably why the little horse has the impressive ability to reach audiences across breed preference and riding style.

The art in the Fergus comics is unassumingly beautiful. The pastures pop off the page, and the tack is so accurate most of us horse nerds can geek out on it. The author, a horsewoman herself, captures the horses’ essence, and also their magic, reminding all of us why we love them.

Jean Abernethy is this month’s featured author on HN Reads! Tune in Wednesday at 7:30pm for her live Q&A with Gretchen Lida. Exclusively on Horse Network.