My Encounter with the Ghosts of Africa

Home > Blog > Adventure > My Encounter with the Ghosts of Africa 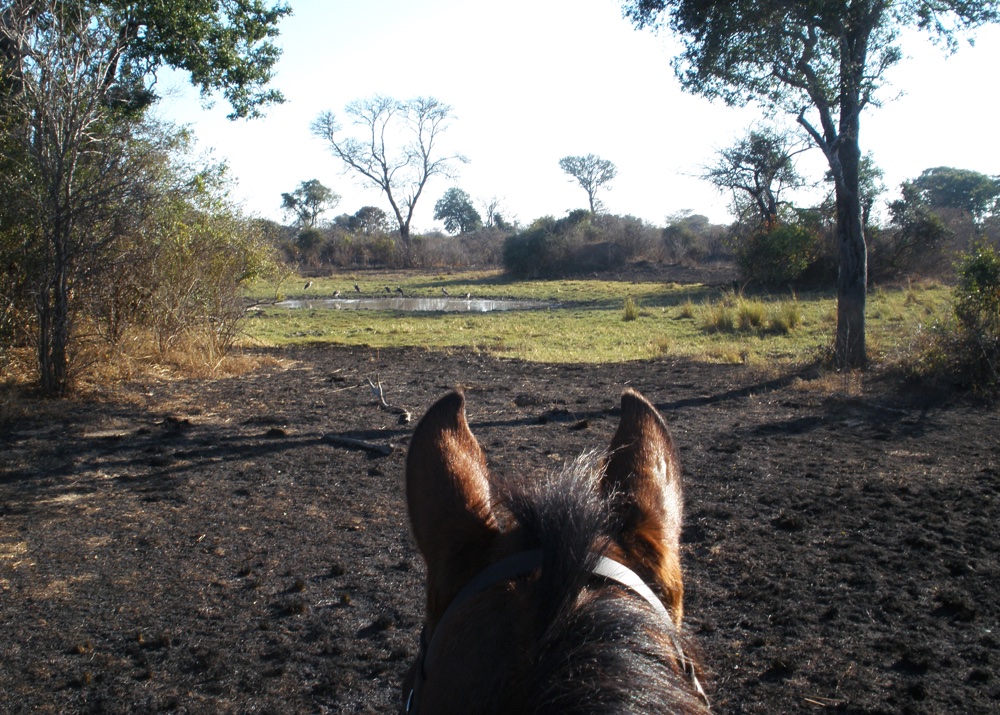 George and I were deep in a thicket and we let the horses pick the best way through.

I wasn’t enjoying my time as branches grabbed at my clothes and scraped along my arms and legs. It worried me. The branches obscured my vision and demanded I kept my wits about me, if my attention lapsed, I would be swiped off my horse’s back via the neck or face and left to flounder on the ground, prime for the plucking.

The thing about African wildlife is it doesn’t care about you—or really anything other than survival and their offspring. It is a raw existence and selfishness is the best way to ensure they see the next day. And that selfishness may extend to eating or just killing a soft-centered Canadian, such as myself.

Our horses were unperturbed by what I felt was a situation. These were seasoned safari horses, and this was just another day for Kruger and Komati. George, the leader of this two-man expedition, owned the horse safari that was about to open its doors to guests, and our mission for the day was to blaze new trails.

I was new to the safari game, having only been in camp for a month. I was unprepared for the fear that riddled my every day and, as far as I could tell, I was the only one that was feeling it.

As we bashed our way through the thick bush my brain was unsure where to place the terror. There are so many options for an untimely death in the middle of the Zambian bush, I was spoilt for choice.

A black mamba could fall from a tree and bite my face.

A warthog could dart out, spook Komati and I’d fall into the lap of an opportunistic lion.

A leopard could leap from his perch onto my back and drag me into a tree to eat later.

The options were unlimited, and I covered 20 to 30 conceivable ways to die in a three-minute period.

It wasn’t until we exited the thicket and entered a clearing that I was able to settle on precisely how it was going to happen.

George and I were discussing our new trail when we heard a growl. A deep guttural growl that, no doubt, came from a lion.

This was going to be my great undoing. My only solace was that it would make a good story for my mom to tell. It was a noble way to die.

I could sense the lion’s presence prowling around the outskirts of the clearing, but her tawny coat blended into the dry knee-high winter grass, obscuring her from my view. I expected she was skulking, shoulder blades pronounced and slowly moving up and down with each carefully placed foot. Her eyes trained on us, unblinking, biding her time until the moment was right. Visions of a horror movie, the type of scene that has the audience yelling at the hapless people blundering into trouble, flickered through my mind.

When I go out for a hack on the groomed trails of the local horse park at home, I pay attention to my horse’s ears. When they are pricked forward, I know there is something potentially scary around the corner. A woman pushing a stroller, perhaps.

That instinctual quality of checking in with what my horse was thinking was quick to depart in the face of imminent death, though. This was not the time to take leave of my senses.

I was spiraling, Komati was grazing.

George used his 40 years of African bush experience to find the source of the noise. I, sheet white, sat staring at him, waiting for something to happen. I wanted to make a run for it, but of the few survival tips I was given about living in the bush the number one tip was, “Whatever you do, don’t run.”

Right. Yup. No, totally. Makes sense. If I bump into a lion, I’ll wait it out. Stand my ground, as it were.

It was a slap across the face. I would have put money on the noise coming from a lion. How can one even mix the two animals up?

I blame Disney. All those cute cartoon African animals have bred a cavalier attitude into the young minds of the future, allowing them (me!) to believe they too can live amongst the wilds of Africa like Tarzan. And it isn’t until that child grows up and finds herself in the middle of the Kafue National Park, sitting on top of a horse, that she realizes there is no kumbaya out here.

“It was warning us.”

“Ghosts of Africa,” George said. “One second they are there and the next they are gone.”

What was I to believe? Elephants sound like lions, where was that in Disney cartoons? Elephants with ghostly abilities? I don’t remember Dumbo vanishing. My childhood was a lie.

George gathered his reins and turned Kruger in the direction of the noise.

It was at this exact moment I realized I was not cut out to live in the African bush. We should head back to camp not into the eye of the storm.

“Remember these animals view a horse and rider as one being, not two,” George said.

More than anything, I wished my nimble 15’3 hand Boerperd, Komati, was a Clydesdale, giving us the required size for facing an elephant, who was, at the moment, invisible.

I wiggled in my saddle, checking my girth was tight enough. I was in a stock saddle, which in regular life I would find cumbersome and a hindrance. Too much leather, too deep a seat and two enormous thigh blocks. But out here, I’d go as far as saying the seats could be deeper and the thigh blocks bigger.

Never have I yearned more for the confines of an indoor arena where my only fear was my coach yelling, “Do it one more time” because my shoulder-in wasn’t good enough. Blessed are those days.

You see, the prospect of an elephant killing you is varied. A lion will just gut you, but an elephant, well…

They can impale you with a tusk, like a rotisserie.

Muddle you with their head like the mint of a mojito.

Stub you out with a foot like the butt of a cigarette.

Always so many options.

We walked for ages, or so it seemed. George, Kruger and Komati were relaxed, enjoying the day out. I was not.

George has what they call “bush eyes,” meaning he can find things in the bush us regular folk can’t. You name it, he can find it and no amount of pointing is going to help me spot it. Kruger and Komati probably have bush eyes, ears and nose, and are likely smug with the knowledge they have four legs, which equates speed, which equates escape. I had nothing.

We turned down a sandy road that I knew took us back to camp. And as relieved as I was to be heading in the right direction, this road was labeled Elephant Alley, because if you come down it, you will see one. Always.

The road was lined with thick bush on either side, which grew high enough for it to arch overhead creating a tunnel-like feature. The only getaway routes were in front or behind you.

While the horses ambled and George kept a vigilant eye, I sat on Komati hopelessly scanning the bush for the largest land mammal on the planet.

“Elephant,” George said, as he kicked Kruger into a gallop. With a sense of dismay, I followed.

The road darkened a hundred feet in front of us as two adult elephants and a baby made their way from one side to the other.

My heart raced and my brain struggled to comprehend what my eyes were seeing.

And then they were gone.

We pulled the horses up where they crossed and the only proof they were ever there were the huge circular footprints left in the sand. There was no sound, no snapping branches, no shrill trumpeting. There were no dark shadows, no moving figures, no enormous elephants.

Disney missed a trick there.

I would never have believed it had I not seen it with my own eyes. Poof, gone.

I learned a lot about myself that day. I’m a chicken, I’m scared to die, I run from danger, not to it, and I lack bush knowledge. I feel safer if I can see what is out there, though that isn’t how those animals are designed and I suspect they all have ghost-like qualities. Horses are braver than I imagined and life in the African bush is raw and relentless.

I am lucky to have had the experience and survived the day. And with five months left of life in the African bush, I hoped to find some bravery and/or bush eyes by the end of it.