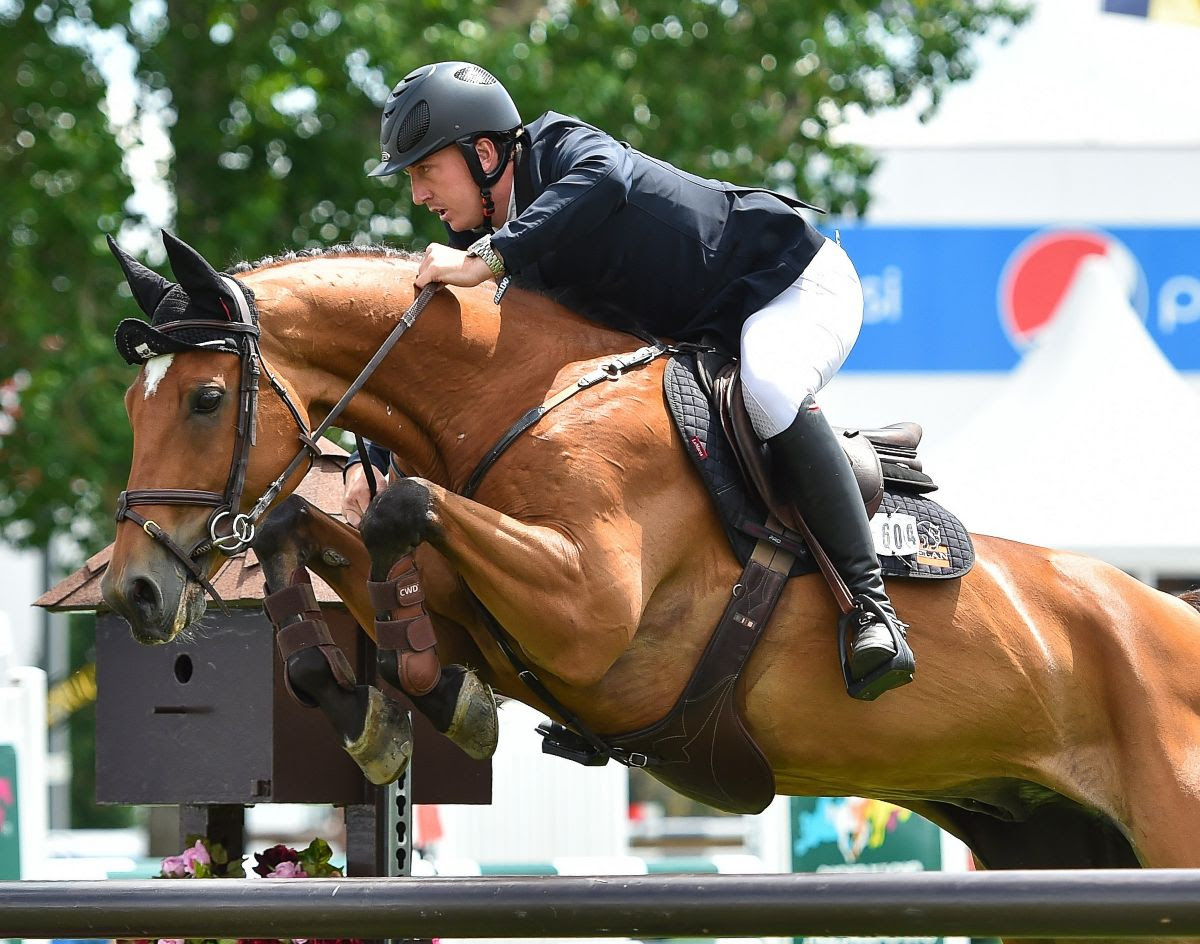 In the original days of bullfighting, the Picador was the central attraction billed on promotional flyers. People gathered to watch the spectacle of a mounted horseman protecting his charge whilst lancing a bull. Bulls and horses died. People cheered. It was a weird and gory time.

This past week at Spruce Meadows in Canada, spectators gathered to watch a Picador of another variety perform. Jordan Coyle’s 12-year-old Anglo European Sport Horse was a central attraction during the North American Tournament in Calgary, AB and, like his namesake, he slayed the competition. (Metaphorically.) People cheered for that, too. It was a glorious and considerably more civilized time.

And also a little weird, at least according to the Irishman.

Dominating the 1.50m division, Coyle and Picador won three CSI5* classes in the space of four days in the hallowed International Ring.

Their streak started last Wednesday with the Friends of the Meadows Cup 1.50m CSI5*.

Some 100 horse and rider combinations representing 18 countries were set to do battle on Santiago Varela’s course. Coyle and Picador, third to ride under the Clock Tower, set the time to beat at 62.05s. A deluge of rain and 19 scratched rounds later, their time held. Picador logged his first win of the week and Coyle, his fifth of the 2019 Spruce Meadows Summer Series.

“It was a very good course, my horse is quite fast and I just stuck to my plan and it worked out,” said the 26-year old.

Jumped over two rounds of competition, the Winning Round format sees the top 10 riders from the first round return for the second or Winning Round in reverse order of ranking. As the fastest clear in round one, Coyle had the luxury of going last. He and Picador shaved nearly a second off Mario Deslauriers (CAN) and Amsterdam 27’s time of 51.56s to stop the clock at 50.66s for another decisive win.

“[Picador is] unbelievable, I’ve never had a horse quite like him,” said Coyle after his win. “He’s always ready to go and just fast. I can trust him to jump the jumps and that makes my job easier.”

Come Sunday, Coyle and Picador capped the week with a three peat, claiming victory in the final leg of the 2019 Alberta Power Speed Challenge: the Lafarge Cavalry Charge 1.50m.

A Spruce Meadows Summer Series long contest, riders competed over the same speed course each week in an attempt to accumulate points. The rider with the most points wins the 2019 Alberta Speed Challenge.

Coyle was leading the charge going into the final week, followed by Beezie Madden (USA) aboard Jiva and younger brother Daniel Coyle (IRL) with Leilani. He and his trust bay steed crossed the finish line in a time of 75.67s to secure both the Lafarge Cavalry Charge and the 2019 Alberta Power Speed Challenge.

“I have nothing left to say, he’s amazing,” gushed Coyle of Picador’s fault free week.

Now three 5* wins in a week is always an impressive feat. Making Coyle and Picador’s even more so is their short tenure together.

Coyle started campaigning the bay gelding in FEI competition at Thunderbird Show Park in Langley, BC just six weeks ago. The horse’s prior international record counts a mere three CSI2* shows with Niclas Haking (SWE) in 2018 at the 1.40m level and a handful of young horse classes with Jessica Balmer (GBR) dating back to 2015.

Presumably, his sparse international record is related to the “excitable” nature of the horse Coyle alluded to in his winning interview on Saturday.

“He has a bit of a reputation for being a bit of a gangster,” revealed Coyle. “I’d love to have a conversation with him and just see what he’s actually thinking because … it could be weird.”

The Irish rider also won the Friends of the Meadows Jumper 1.45m with Dundalk and the 2019 Alberta Power Young Horse Challenge 7 Year Olds with Centriko Volo.