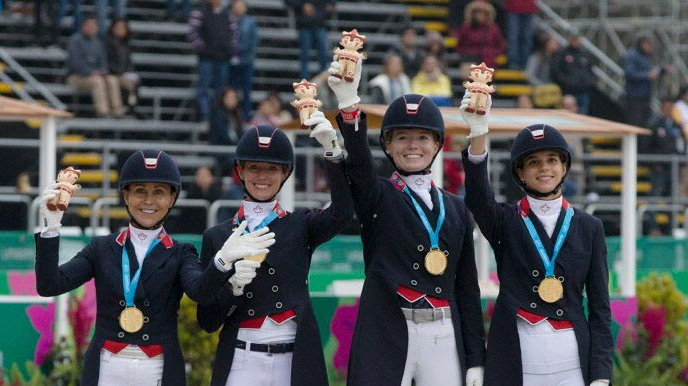 The Canadian Dressage Team came to the Pan American Games in Lima, Peru with visions of gold dancing in their heads.

They’re leaving with new hardware and a ticket to the Tokyo 2020 Olympic Games.

The Canadian team, represented by Jill Irving, Tina Irwin, Lindsay Kellock, and Naima Moreira Laliberté, was neck-and-neck with the United States after the first leg of the team competition on Sunday, finishing a fraction behind at 219.828 to USA’s 219.970. On Monday, they returned to seal the deal, claiming the gold medal for Canada for the first time since Havana 1991 and Olympic qualification.

Tina Irwin has a Drake connection

“They’re really good friends of ours, Wendy Watson and Lewis Manne from Zap Productions [in] Toronto. They’ve actually known Jamie, my husband, for years, since he was a kid,” said Irwin.

She’s now hoping, it’ll be “God’s Plan” that they dance their way to individual gold. Irwin and her 12-year-old Oldenburg gelding are currently second in the individual standings, after posting small tour scores of 73.735% and 73.853% in the Prix St. Georges and Intermediate I, respectively.

Lima is a “first everything” for Naima Moreira Laliberté

Naima Moreira Laliberté, daughter of Cirque du Soleil founder, Guy Laliberté, has show biz connections of her own. But it’s her debut performance that’s generating all the buzz.

Scoring a 71.787% in the Grand Prix Special, her ride on the 12-year old Hanoverian gelding, Statesman, made the gold medal a mathematical certainty for Canada. She’s currently fourth on the overall leaderboard.

Kellock’s Pan Am appearance is a happy accident

When Lindsay Kellock started showing Floratina for owner Chloe Gasiorowski eight months ago, contesting her first major games wasn’t even on their radar.

“Chloe bought [Floratina] in December for herself as a schoolmaster. She has four young children, so she’s not able to (ride in Florida) as much as she would like. So, she offered, ‘Do you want to compete the horse a little bit?’ We went in our first show, and she got a really high score.”

With Gasiorowski’s support and coach Ashley Holzer’s urging, they decided to declare for the Pan Am Games. In 17 international performances since, the pair has never scored below 70%.

“It really wasn’t meant to happen this way, but Chloe was so generous to share her with me and we ended up getting the scores, so now we’re here,” said Kellock.

They kept the scores coming in Lima, setting two personal bests of 73.176% in the Prix St. Georges and 73.147% in the Intermediate I. After the Games, Floratina will go back being campaigned by her owner.

Jill Irving chose her veteran mount, 17-year-old Degas 12, over her other top horse, 14-year-old Arthur, for their consistency.

“Age before beauty,” said Irving. “I’ve had Degas longer. I also feel this is a team event and I felt I wanted to go with the most consistent [partner]—you know, the nice shoe or the comfortable slippers.”

Equally consistent is her longtime partnership with coach Ashley Holzer.

“I wouldn’t be here without my coach, Ashley Holzer, and without her 33 years of advice—longer than a marriage!”

The top 50% from the big and small tour will advance to the Grand Prix Freestyle and Intermediate I Freestyle to compete for individual medals on Thursday.