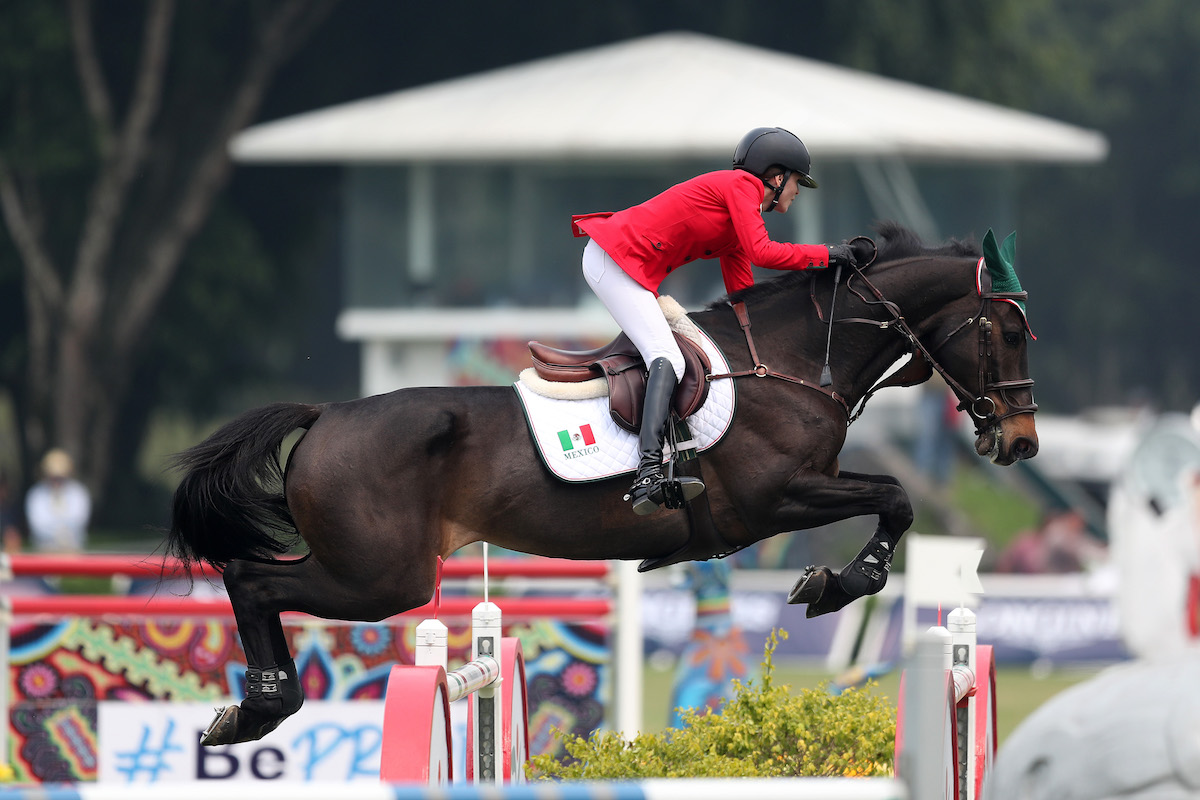 The 49-year-old was one of only two riders to master Guilherme Jorge’s course in the CSIO5* Longines Grand Prix at Club Hipico Coapexpan in Mexico on Friday.

First the return for the jump off, O’Farrill and her 11-year-old Oldenburg mare Calvira posted an efficient clear, leveling the pressure firmly on the shoulders of countryman Andres Azcarraga, the only other clear. The young rider (Azcarraga is 25) came out blazing, with an efficient turn from one to two and inside track to the double. But with a hind rail at the Longines vertical, he handed the win to O’Farrill.

Here’s what we know about team Mexico’s veteran rider:

1. Her real name is Claudia!

According to RSVP Online, O’Farrill’s father nicknamed her “Lorenza” and “Lorencilla” as a child for her whirlwind personality. And it stuck.

2. She ninth generation Mexican, but her family has Irish roots

The surname O’Farrill had its origin in Ireland. It’s speculated that it reached the city of Puebla, Mexico towards the end of the eighteenth century. Ròmulo O’Farril Jr., Lorenza’s grandfather, was the honorary consul of Ireland in Mexico.

3. Her first horse was a “Penguin”

Technically, “Penguin” was the family horse. O’Farrill first set foot in the stirrups at age six.

O’Farrill spent a season living in the United States at the ranch of family friend and famed horseman, Gene Lewis—an experience she says was among the most influential of her life. Wildly successful in the 60s and 70s, Lewis was renown for bringing his brand of “cowboy magic” into the show jumping world. “He taught me to understand the nature of horses and not go against them,” O’Farrill told RSVP Online. “If a horse is frightened and runs away, the worst is to punish him, since it is his strongest survival instinct, to quickly escape danger. With patience and congruence they learn to restrain themselves; you have to earn their trust.”

A longstanding member of the Mexican team, O’Farrill has been collecting international wins since her junior career. In 1998, she won gold at the North American Young Riders Championships in Wadsworth, IL. She also claimed gold at the 1990 Central American and Caribbean Games in Mexico City and was a member of the 1998 World Equestrian Games national team.

6. You could say she’s the Georgina Bloomberg of Mexico

O’Farrill’s family is part of a media dynasty in Mexico. Her great grandfather Rómulo O’Farril Sr founded the newspaper Novedades and owned the first commercial TV station, Televisión de México. Also, like Bloomberg, her farm in Ajusco is a mini-zoo. In addition to about 20 horses, there are dogs, piglets, llamas and a dwarf donkey. “I love nature because it is my way of being close to God,” O’Farrill told RSVP Online.

According to her FEI bio, O’Farrill incurred a back and hip injury that required surgery in 2016 (another parallel with Bloomberg, who’s also undergone back surgery). She was back in the international ring three months later and has since gone on log top 10 finishes at 4* events in Balvanera, Coapexpan, Guadalajara, Calgary, Langley and Leon. And, as of Friday, a 5* victory at Club Hipico Coapexpan!

8. She once did the Insanity Workout program for four months

This is less relevant to her riding career than it is to her “whirlwind” personality. “Insanity” is a total body workout that requires no gym or equipment. Like the name implies, it’s crazy hard.

O’Farrill is one of the four riders who will contest the Longines FEI Jumping Nations Cup™ Mexico for her national team on Sunday. Watch it live on FEI TV!