No Need To Justify A Loaded Travers Stakes 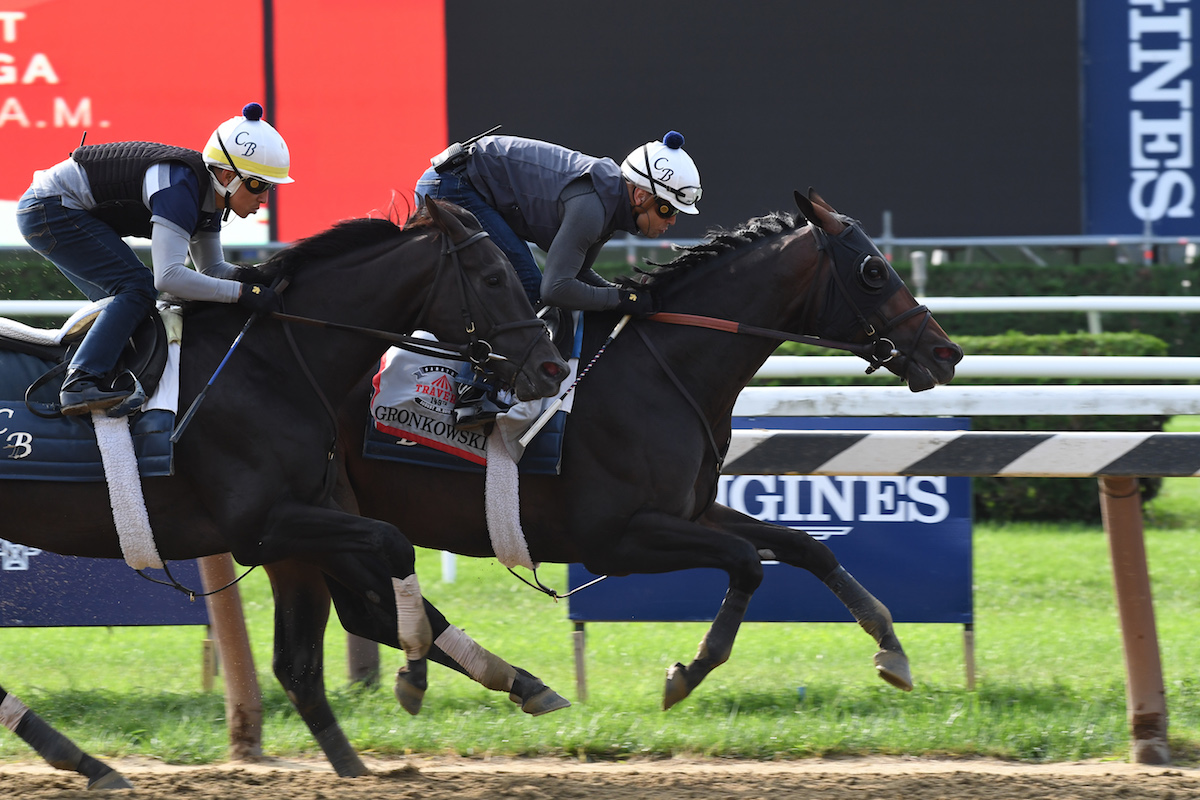 Fans who feared this year’s Travers Stakes at Saratoga, also called “The Midsummer Derby,” would be diminished by the absence of retired Triple Crown Champion Justify need not fear.

This is one of the most interesting Travers fields in recent history.

With Tuesday evening’s post-position draw completed for the $1.25 million Grade 1 affair this Saturday, let’s take a look at the contenders in what appears to be an intriguing and wide-open race with some fascinating storylines.

This year’s Travers will be headlined by several horses that near-denied Justify, led by Haskell winner (G1) and current 2-1 favorite Good Magic seeking some from the #9 gate for trainer Chad Brown in the 11-horse field.

…and, wonder of wonders, there’s Wonder Gadot, the first filly to compete in the Travers in 39 years (Davona Dale, 1979, finished fourth as the favorite) and the first potential winner in 103 years (Lady Rotha, 1915) drawing post position #2 as the surprising third morning-line choice. 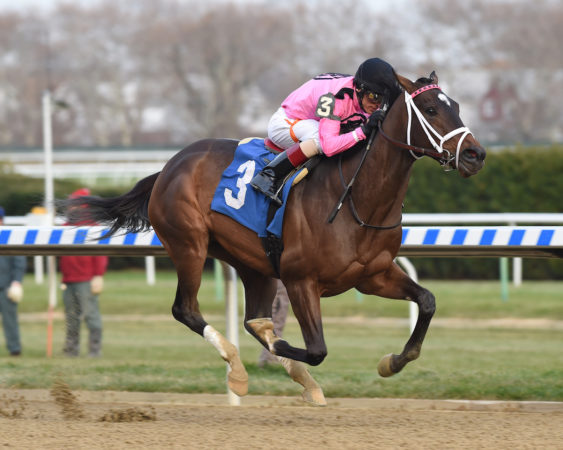 Wonder Gadot tries to become the first filly to win the Travers in 103 years. ©NYRA

That may be in part because the Canadian-bred Medaglia D’Oro filly will be ridden by Irad Ortiz Jr., setting up another jockey sibling rivalry between two top New York-based riders with brother Jose Ortiz on Good Magic. 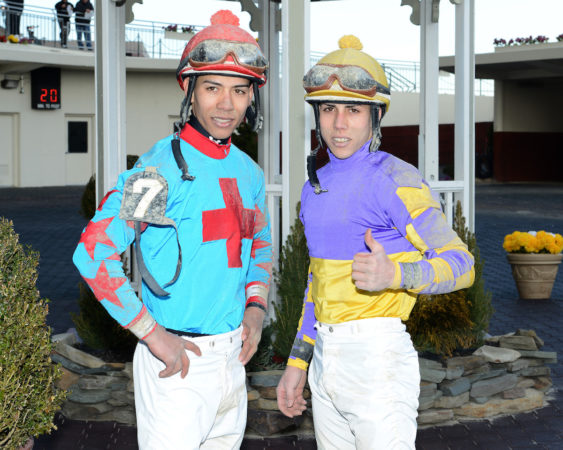 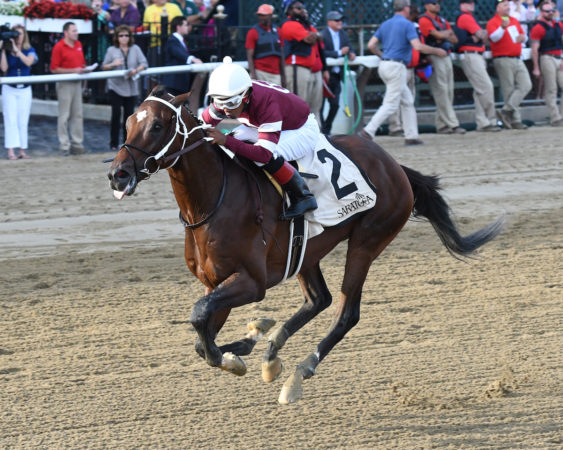 Pulled-up, mud-encased post-Kentucky Derby Euro runner Mendelssohn is being returned by trainer Aidan O’Brien on a rough Breeders’ Cup Classic path that saw him finish third as the favorite in last month’s Dwyer Stakes (G3) at Belmont Park. He’ll be guided by regular European Champion rider Ryan Moore, seeking to gain some respect for the runaway UAE Derby (G2) winner from the #8 post. At 12-1, he may not yet have regained respect, but he is likely to gain considerable wagering.

Like Mendelssohn, Catholic Boy will attempt a successful switch from turf to dirt following two graded grass wins in the Belmont Derby (G1) and the Pennine Ridge (G3). But he’ll have to do it from the far outside #11 post. 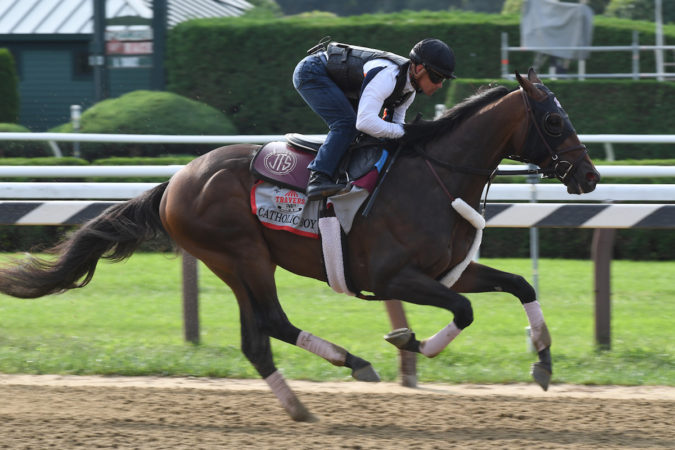 Catholic Boy will seek to make the switch from turf to dirt in the Travers. ©NYRA

Then there are the wannabes seeking a piece of the purse if not a win: King Zachary, like Tenfold another son of Curlin, trained by Dale Romans and ridden by veteran Robbie Albarado of Curlin fame in the #7 gate at 15-1. The two longest of shots at 30-1 are Trigger Warning, shooting from the #1 post and Steve Asmussen-trained Meistermind, who also trains Tenfold.

Meistermind is owned by the same group that raced Justify, WinStar Farm LLC, China Horse Club International Ltd and SF Racing LLC, so the Triple Crown Champion may be glued to the NBC telecast from 4-6 pm EDT cheering on his (former) stablemate.

There are some notable absences aside from retired Justify from the longest-running major race in the country and the highlight of the summer racing season. Hofburg, thought by many to be the “smart money” choice after finishing third in the Belmont Stakes, was pulled from the list of probable starters after spiking a fever. The scratch made Hofburg’s regular rider, Irad Ortiz Jr., available to ride Wonder Gadot. Justify trainer Bob Baffert, whose horses have won the last two Travers (West Coast, 2017 and Arrogate, 2016), will not field an entry this year.

Here’s the complete lineup, with early odds that are likely to change as the race draws near:

The Travers is not a Breeders’ Cup “Win-and-You’re-In” ticket to the Breeders’ Cup Classic, but several of this year’s runners are being aimed at that race and a few can be expected to make an appearance at Churchill Downs Nov. 3.

There will be four “Win-and-You’re-In” tickets punched on the Saturday Saratoga card. The races and the Breeders’ Cup race for which the winner will qualify are: the Sword Dancer (Longines Turf), the Personal Ensign (Longines Distaff), the Ballerina (Filly & Mare Sprint), and the Forego (Dirt Mile).