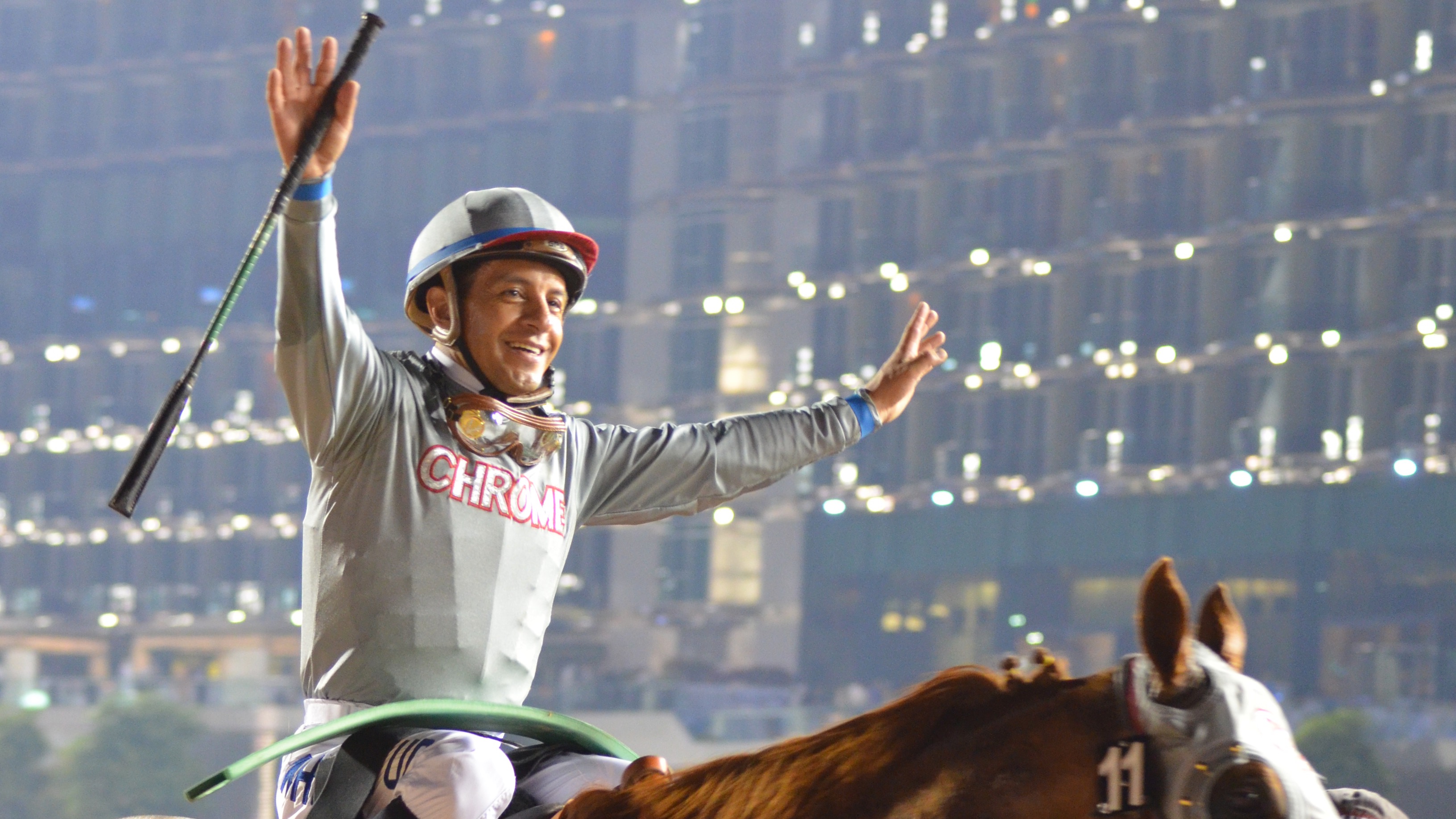 Hall of Fame jockey Victor Espinoza is expected to fully recover after suffering a fracture of his C-3 neck vertebra and what his agent Brian Beach described as a “stinger” in his left arm during a training ride Sunday at Del Mar Racetrack, near San Diego. He is being cared for at nearby Scripps La Jolla Hospital where he remains under observation.

Espinoza was thrown to the track as his mount, Bobby Abu Dhabi, collapsed and died from an apparent heart attack during the training ride. The incident occurred near the end of an early morning workout with stablemate El Huerfano.

Espinoza remained motionless for several minutes and initially lost feeling. He was transported to the hospital by ambulance after being stabilized on a stretcher with a neck brace. Doctors reported the jockey had regained 50 percent of his feeling by day’s end. There is no paralysis and a full recovery is expected.

“We dodged a bullet,” said Beach in a statement issued by Del Mar’s media relations office. “Doctors are optimistic he’ll have a full recovery fairly quickly.”

He added there is no timetable for Espinoza’s return to riding, saying it will be a “day-by-day” decision.

Espinoza, 46, a native of Hidalgo, Mexico is best known for guiding Bob Baffert-trained American Pharoah to victory in the 2015 American Triple Crown and the Breeders’ Cup Classic. 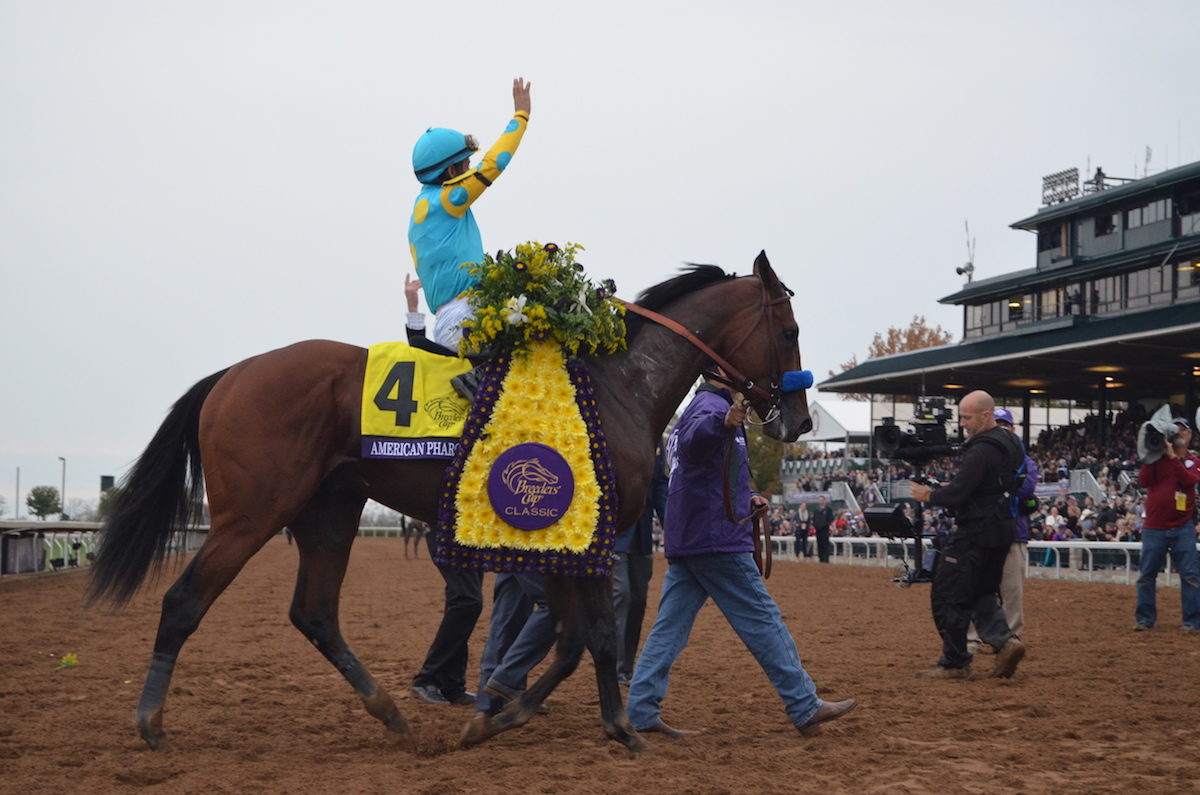 He also won the 2016 Dubai World Cup guiding fan-favorite California Chrome, winning the race even after his saddle cinch slipped near the start and slid to the horse’s rear quarters by the end of the race.

Espinoza was the first jockey in racing history to have three chances at winning the Triple Crown (War Emblem, 2002; California Chrome, 2014; American Pharoah, 2015), finally succeeding with American Pharoah while becoming the first Hispanic jockey to achieve the honor.

Bobby Abu Dhabi was a four-year-old son of Macho Uno. The winner in four of nine races, he was beginning to make a mark as a sprinter, having dethroned 2017 champion Ransom The Moon in this year’s G2 Kona Gold at Santa Anita April 21. The colt finished runner up in the G2 Triple Bend at Santa Anita and third in G1 True North at Belmont.

Trained by Peter Miller, he was working out for Saturday’s G1 Bing Crosby Stakes at Del Mar, a Breeders’ Cup Sprint “Win-and-You’re-In” event. Bobby Abu Dhabi was owned by Rockingham Ranch, which released news of the horse’s demise and apparent cause via Twitter shortly after the incident.

It is with great sadness that I can confirm this morning we lost our boy, BOBBY ABU DHABI to a sudden cardiac arrest on the track. While we are deeply saddened and heartbroken by this loss our thoughts are currently with HOF jockey @VictorEspinoza. Please keep him in your prayers pic.twitter.com/sp30wUqYH7

**UPDATE**
Jockey Victor Espinoza’s riding agent, Brian Beach, told the Daily Racing Form’s Jay Privman, that the injured jockey is “going to be completely fine,” but will be unable to ride for at least six weeks and will miss the entire meet at Del Mar Racetrack. The agent Tweeted the news late Monday that Espinoza will remain under observation at Scripps Memorial Hospital, La Jolla, CA.

Victor’s condition has improved today to “stable” . He has been up and walking but they are going to hold him in the hospital a few more days for more observation. He will be moved from ICU later today but unfortunately will miss the remainder of the 2018 Del Mar meeting.

In a second update, posted earlier today on Twitter, Beach revealed that the Dancing with the Stars alum is “in good spirits” but is still “experiencing some numbness and tingling in his upper extremities.” He remains in the hospital.

July 24th update: Victor remains in the hospital and is in good spirits. He still is experiencing some numbness and tingling in his upper extremities. There is no timetable for his release at the moment. Thank you all for your interest and good wishes.

The Hall of Fame jockey suffered a fractured C-3 neck vertebra and what doctors described as a “stinger” that resulted in a temporary loss of feeling in his left arm and shoulder when thrown from his mount, Bobby Abu Dhabi, during a training ride early Sunday morning. Feeling has since returned to the arm and shoulder.

Espinoza was thrown hard to the dirt track when the horse collapsed and died of a suspected heart attack near the end of a training workout at Del Mar.

California regulations require a necropsy be performed on any horse that dies in training or during a race on any California racetrack to better determine the cause of death.

Though the results of necropsies are not considered to be public records in California, as in many states, previous legislative attempts, individual requests and litigation have challenged this provision, seeking greater transparency.

It is not yet known if the results of Bobby Abu Dhabi’s necropsy will be made public.