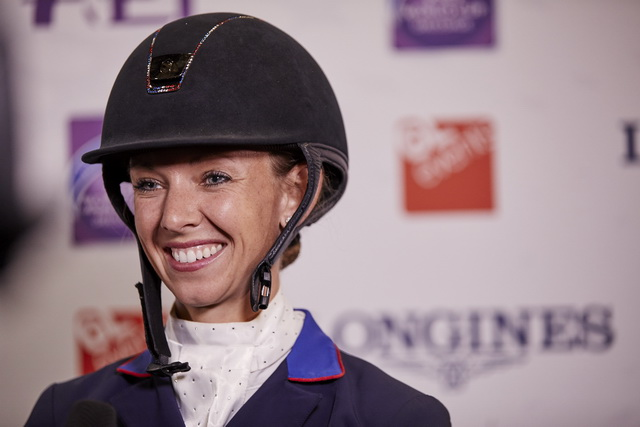 You know that tired horse movie plot that we all love to make fun of?

The one where a young girl meets a troubled horse and, for reasons that defy logic, standard safety practices and plausible skill, they form a bond so deep and profound it enables them to overcome seemingly insurmountable odds and win a championship/race/Olympic medal?

Yeah, that one. The one that makes horse people roll their eyes and pen takedown posts on the preposterousness of it all?

Well, we can all stop laughing now because Team USA’s Laura Graves and Verdades are that story.

The latest scene is unfolding right now at the Longines FEI World Cup™ Dressage Final in Paris, France and it’s so goddamn inspiring you’re going to kind of hate yourself after reading this.

Graves bought “Diddy” as a three-month old foal off a video. She was all of 15 years old at the time.

Diddy arrived in America three months later and was so wild it took three men to get him on the trailer.

In the early days, it was all our young heroine could do to get a pair of boots on her dressage prospect. The first time she wore spurs, he broke her back.

Frustrated after four years of painfully slow progress with a horse that wouldn’t trailer, bathe, clip or let her apply fly spray, Graves sent Diddy to a trainer to be sold.

Inevitable low point when the protagonist contemplates giving up? ✅

Only the trainer she sent him to couldn’t get on — because Diddy wouldn’t let her.

Horse that will only let girl ride him? ✅

Graves started over and slowly but surely, things started to turn around. Diddy went from prospect to verifiable Grand Prix horse and, in 2014, squeaked into the National Dressage Championships.

Dark horse in a major competition? ✅

With nothing to lose, the pair put in their best performance to date and finished second behind Olympic veteran Steffen Peters!

Turning point when their hard work starts to pay off? ✅

The result assured Graves and Diddy of a spot on the American team for the 2014 World Equestrian Games where they would face off against the international heavy weights of dressage for the first time, including the most decorated equestrian in history, Germany’s Isabell Werth.

In their first ever international championship, our rising stars scored a phenomenal 82% in the freestyle, becoming one of only four American riders to earn a score over 80% in a championship. Ever.

This week, Graves and Diddy are on track to achieve their greatest accomplishment yet.

In the first round of the 2017/2018 Longines FEI World Cup Dressage Final, America’s sweetheart usurped the defending World Cup champion to take the overnight lead.

Come Saturday, they’ll attempt to seize the crown for good with the most complex freestyle they’ve attempted to date.

“It feels very scary,” said Graves of sitting ahead of the 10-time Olympic medalist and reigning world #1 and #2 (and #6), “especially with such a fierce competitor because I know she’s going to ride even harder tomorrow!”

It’s going to be an edge of your seat, nail-biting scene in a storyline that just keeps getting better.

(Even if they do reinforce every horse movie cliché that was ever made.)

Watch the final round of the FEI World Cup Dressage Final live on FEI TV or follow the live scoring on longinestiming.com.