Home > Blog > Stories from the Heart > Kicked from Complacency 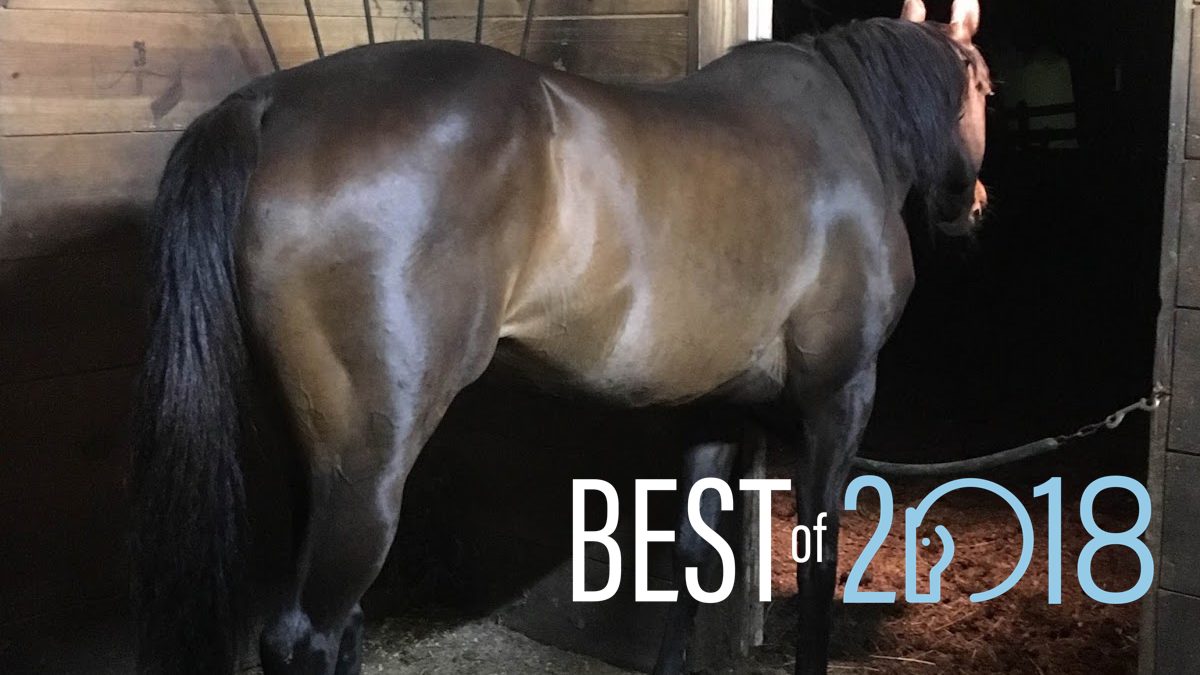 We find ourselves repeating the same doctrine to novices and people whose horse sense we are unsure of.

We also develop a sixth sense about the horses under our care: we get a picture of a horse’s emotional condition beginning at dawn when we flip on the barn lights and walk by his stall. Is he calm? Still groggy from sleep and not alert? Concerned? Agitated? Scared? A horse tells us with his ears, eyes, and body just which version of him we will be dealing with that day, and we gauge our interactions with him accordingly.

But sometimes, complacency can set it. At least, I’ve found that to be true, especially with a horse that we’ve known for a long time, and formed a close bond with. It might start out as a small transgression—crawling halfway under a horse to paint a hoof rather than getting up and walking around to the other side. If anyone else is in attendance, we might throw out a disclaimer, “You should never do what you see me doing right now,” as our actions belie our words.

So it was with Lola, the Thoroughbred mare we had acquired two weeks off of the racetrack where an injury had ended her promising career. 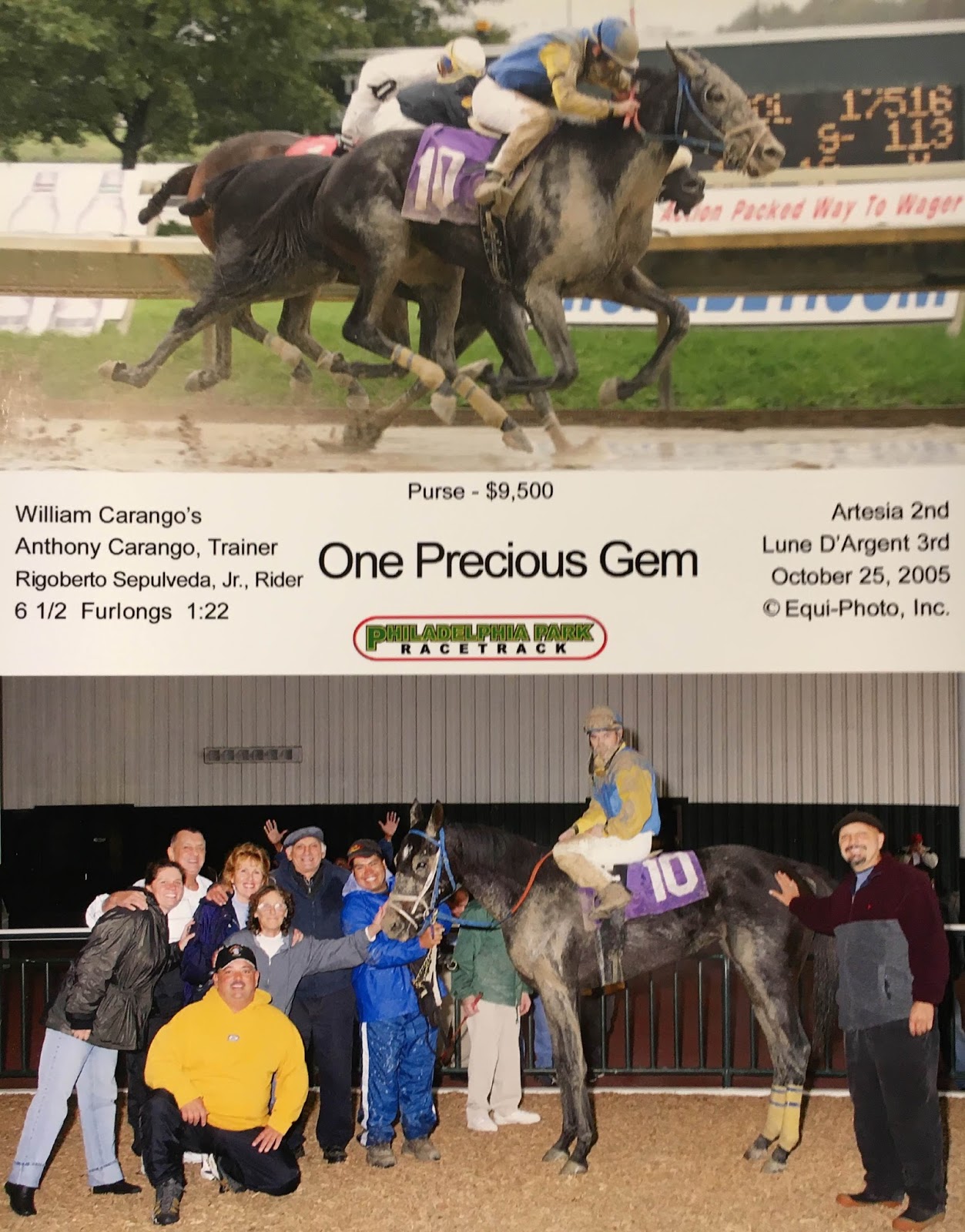 Lola’s racing days. Were there things from her past that she couldn’t tell me about?

During her lengthy rehabilitation and recovery period, we formed a bond and mutual trust that was unbreakable.

That trust was hard-won and very real, but I was probably just a little more conscious of my movements around Lola than with our other horses. Any quick hand or arm movement around her or overzealous use of a manure fork in her stall had the potential to trigger her lightning-quick reflexes and send her retreating smartly backwards into the stall wall. There were things in her past, it seemed, that she was unable to tell me about.

We knew a lot of things about each other, and made allowances for them; that’s what enabled our relationship to work. I never thought of her as difficult, but she was very sensitive.

Lola may not have been 100% trusting of anyone, but from what I observed in nine years caring for, training and riding her, there was no other human that she trusted more. She would give the boss mare, Bella, a very wide berth and back down in any situation that had even the potential of conflict, her strides being very tentative. With me by her side though, she would confidently prance right past her, ears forward, with a purposeful stride.

Sometimes I would chuckle to myself that maybe she had a little too much faith in me; Bella could easily take us both out if she ever had the mind to. 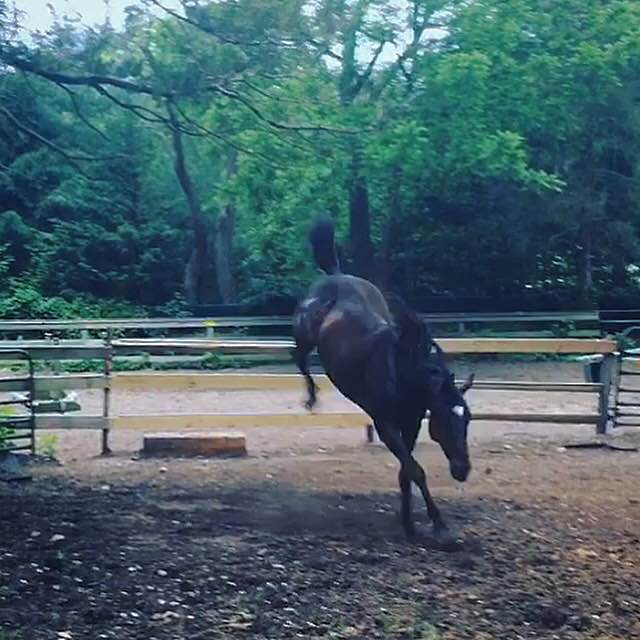 Lola, the sweetheart of the herd, still feels her oats.

One recent evening after returning home at around 9:00 pm, I headed out to the barn to put the horses in for the night. I switched on the paddock lights, and Lola meandered over and made her way past me and into her still darkened stall, like she always does.

As she passed, I noticed something on her underside, maybe a small burr, and instinctively reached out to touch it, forgetting for a moment that I had placed myself beyond the scope of her peripheral vision. My next recollection was of a wrenching pain in my gut, a blinding light as my eyes were looking straight up into the paddock floodlights and a sharp, hard thud that was my head hitting the ground.

For the first time in 18 years around horses, I had taken a kick!

I next had a unique view of what a horse looks like when she is jumping, from the point of view of the jump. Lola bolted out of the stall and jumped over me in her hasty exit, being mercifully careful in where she placed her feet. Or lucky.

I got myself up and tried to make sense of what had happened. There was blood all over my left hand and as the shock wore off I started to hurt everywhere. It took me a while to get the horses in after the commotion, especially Lola, who had retreated to the far corner of the paddock and needed to be coaxed and reassured that there would be no repercussions to her fear-based reaction.

All of her movements were now very jerky and tentative as if she were waiting to be punished.

I lingered by her stall door for a long while before turning away from her, and only then did she cautiously approach and put her head out and bury her nose in my chest.

“It’s ok, girl. Your body reacted totally on instinct, which is a part of your blood and bones. And I know better. No hard feelings.”

After I had made my way up to the house to be checked over by my wife Mary, a nurse by profession, I went to bed. But although I was very tired, sleep would not come.

What kept me awake was not the fear of playing out “what if” scenarios, but rather an intense feeling of gratitude.

The last few months, I have been exposing my two-year-old grandson, Daniel, to the wonders of horses, to the delight of all humans and equines concerned. It occurred to me that I had at some point started thinking of our horses as big teddybears, and perhaps unconsciously transmitting that attitude with the best of intentions but the carelessness of familiarity.

I was very grateful that it was me that paid the price for that lapse in judgment, and not Daniel. It was a very small price to pay for an important and timely refresher course. They are not teddybears. They are horses. 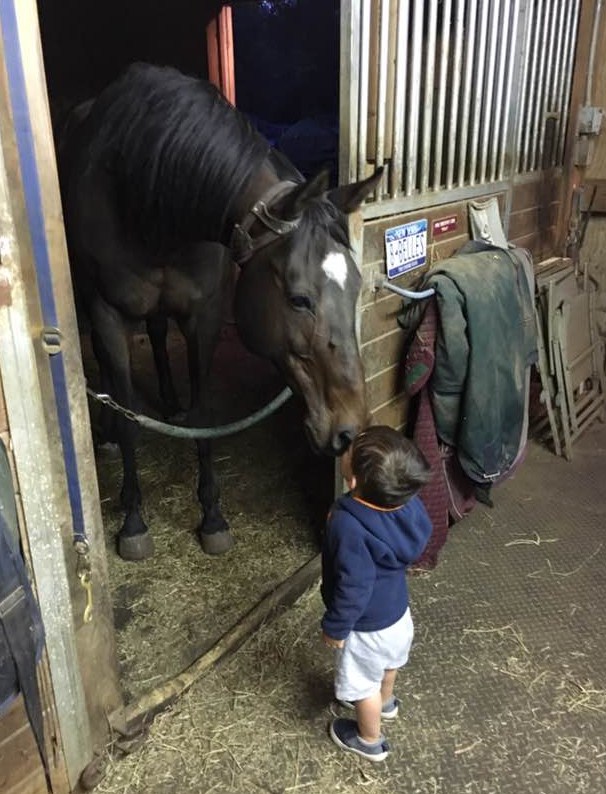 Someday, young Daniel, I’ll tell you all about your pal Lola, when she was known as One Precious Gem.

The fact is that I had frightened Lola and she responded the way frightened horses do. Then she laid low for awhile, then allowed me to walk her back to her stall, and when she thought it was safe, came and expressed affection.

I am grateful because Lola teaches me how to be: there was an overreaction to stimulus, a retreat to regroup, then a making of amends.

I had to wonder, if this had been a human-human interaction, would it have been resolved so quickly and amicably?